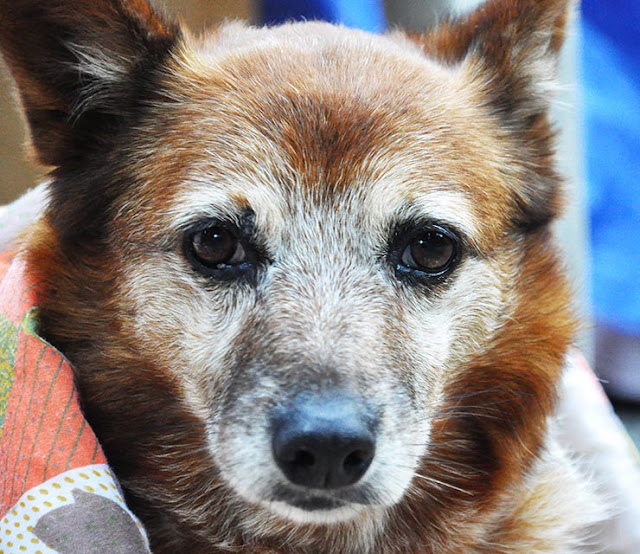 It's not unusual for Rocket and Rufus, our two mighty warriors, to run out into the night, through the trees, in search of coyotes or raccoons or whatever else they perceive as a threat to their domain.  Over the years, they've killed plenty of vermin, and it wasn't until 2 months ago that either of them came back injured.  Rufus managed to tangle with a coyote and had a puncture to his groin.  Once he was stitched up and healed, he was back in business.

The other evening, just past dusk, the boys sounded the alarm and off they ran back towards the creek.  I have learned over the years that when they decide there's danger, calling them back is simply impossible, and this night was no different.  An hour or so later they came running back into the yard, panting and smiling at a job well done.

I had the door to the rec room open and Rufus bounded up the stairs happily.  Rocket, however, looked at me sheepishly and slipped beneath the steps where he laid down.  This wasn't always unusual...he spent a lot of time beneath the stairs, so I didn't give it any thought at all, and closed the door with Rufus inside.  Rufus, after all, was the trouble maker of the two, so locking him indoors would mean the neighborhood would sleep in peace, rather than listen to my boys as they chased four legged criminals through the trees all night.

Come morning, it was obvious that Rocket was in pain.  I needed to go to the farmer's market that day, so we gave him a little asprin, thinking and hoping that would help with the pain that he was obviously feeling.  He didn't want to use his hind end much at all, putting his weight mainly on his front end.  Asprin should help with possible inflammation, too, and I was hopeful that he'd be a little better when I returned that evening.

No such luck.  Rocket was still tender and not wanting to use his back legs.  He was, however, very happy and smiling as usual, and running our hands along his body was showing nothing out of the ordinary.  And when food was carried out?  He managed to  hustle just a little more in order to get to it.  His appetite wasn't lacking...a good sign, right?  Two more asprin...and a hope and a prayer for a better Rocket come morning.

But he wasn't better.

I called the vet, and City Boy carried him to my truck.  He laid on the floor at Darling's feet as we made the 30 minute drive.  When we arrived, they got us into a room and went to find a vet.  Any vet...they were booked full, but had squeezed us in hoping that someone would have a few minutes to have a look.  A young woman came in and took Rocket to the back where she took X-rays.  She came back to tell us that there was good and bad news.  Good news?  No broken bones.  There was arthritis in his back, but it was something he'd been dealing with for years.  Bad news?  He had no feeling in his tail, and while the area of his anus had feeling, he had no muscle control.

Rocket's bladder was full, and from the Xrays she could see that he'd not defecated in awhile, either.  She could, if we wanted, give him a catheter and either keep him there overnight (recommended) or send him home.  He'd need to be carried in and out, as walking was obviously out of the question.  We should keep him in a bathroom, preferably, for easy clean up.

Ultimately, though was the fact that Rocket had nerve damage, and there was no way to know if he'd ever recover.

Darling and I took a few minutes alone, and came to the difficult decision that Rocket, at age 12, certainly did not deserve to suffer.

And so it was that we arrived with our loyal Rocket, and left with only our memories of that little red dog with the heart of a warrior.  He will be greatly missed.  Rest in Peace, dear, sweet Rocket, until we meet again.
Posted by Tracey at 8:27 PM

Aww bummer. What a hard decision to make. Glad you were able to let him go instead of prolonging his pain.

A very hard decision indeed, but one based in true love. I am so sorry for the loss of your four legged family member.

such a hard decision to make, but it shows how much you cared for him, You'll be in my thoughts and I'm sorry to hear about your loss

I'm so sorry for your loss.

Tracey, I'm so sorry. That's an awful decision to have to make. Hugs to your whole family.

So sorry to read of the loss of your warrior. He will be waiting at the Rainbow Bridge for you . . .

Awww that's sad! Hugs to you all, I know you'll miss him!