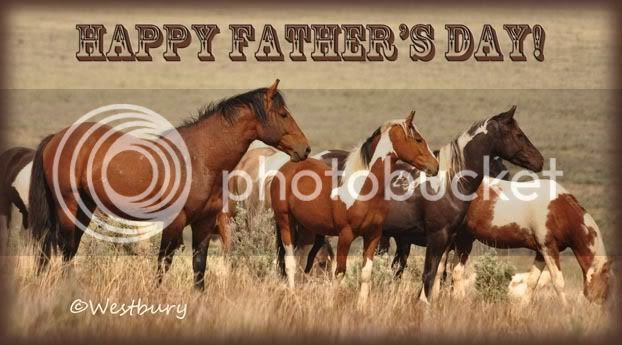 Wishing my dad...and all the others...a very Happy Father's Day!

Thanks for taking care of your herd of women all these years!
Posted by Tracey at 3:59 PM 3 comments: Links to this post 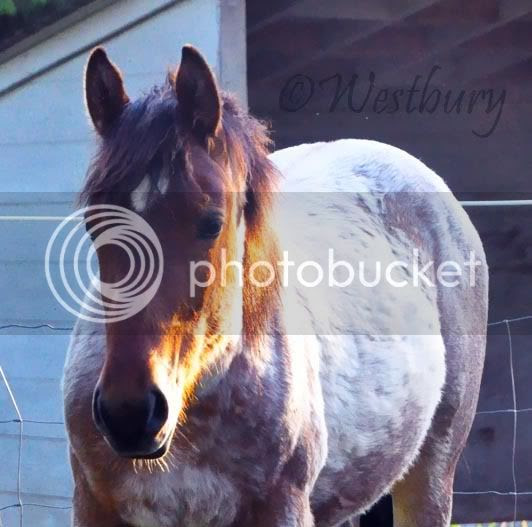 It was toe trimming time. Both Rep and Max came with ferociously long toes, and they were getting worse by the minute. With both of them (finally) picking up all four feet easily enough, I put a call in to Dave (Sandy's owner) to come see what he could do to help the little girls out.

Rep is typically so friendly, sweet and mellow...but she opted not to show that side. Nope. She wanted nothing to do with a pedicure, thank you very much. HEY! Did you hear me? That tickles. Stop. I'm going over here now, good bye. Can we say Bad Reputation???

Mind you, she was still very much easier than Steve Holt! on his first toe trim (and second and third and fourth and...) It was mainly her left front that she felt didn't need to be touched. But she finally worked the wiggles out and stood like a good girl.

Max, on the other hand... Well, Mighty Max is our sparkler girl. She's bright and shiny and has a bit of get up and go to her. However, she's also the one who, once she knows what you're expecting, does just what needs to be done. And so it was that Max was the shining star of the hour, even using the hoof jack on a couple of occasions. 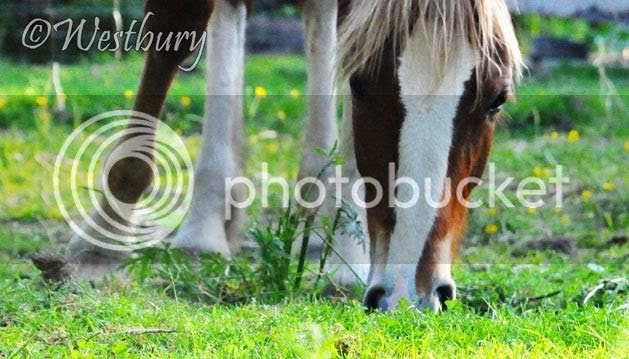 So now both girls have pretty pedicures, and I'm sure it feels rather funny not having toes drag on the ground when you walk. In typical Max and Rep form, Max took off to try her new feet, while Rep stood placidly at the fence wondering when someone was going to come pet her.
Posted by Tracey at 5:46 AM 7 comments: Links to this post

Posted by Tracey at 1:20 PM 8 comments: Links to this post

But the Real Question Is...

High on the mountain top, where the coyotes sing and the winds howl, this is where you'll find my wild horses. The grass is good, with spring rains ending (they hope) a drought which has lasted several years in this region. The horses are looking sleek and fit...some are borderline fat! This is a good thing, because it won't be long before the blazing sun dries up this land and grass again becomes sparse.

But on this particular morning, everything was...well...picture perfect. And as we stood among the bands, a little movement caught my eye. I took a step and peered closely, and smiled when I saw the little black years flickering. A few more steps and the black colt was visible. Be still my heart...I think I may just be in love! 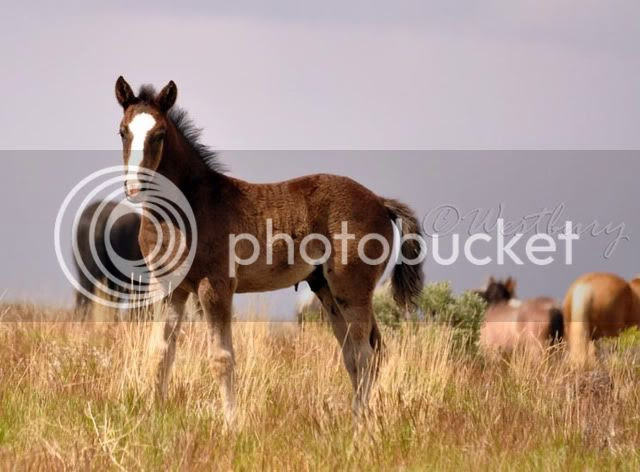 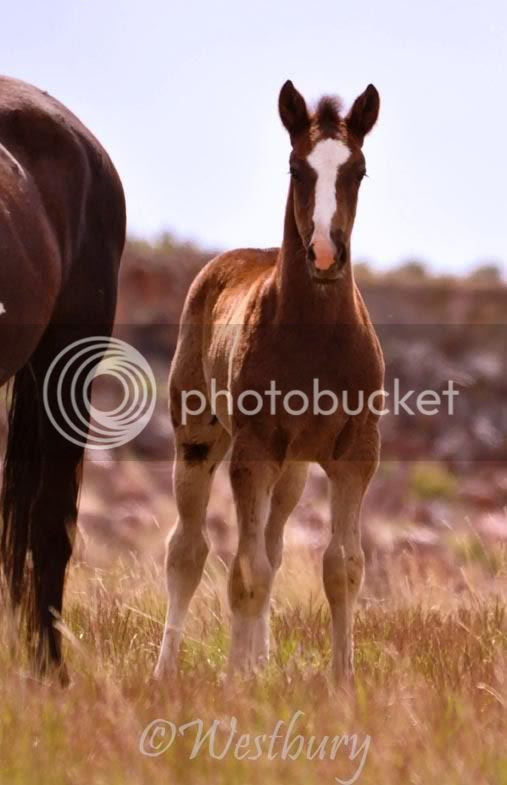 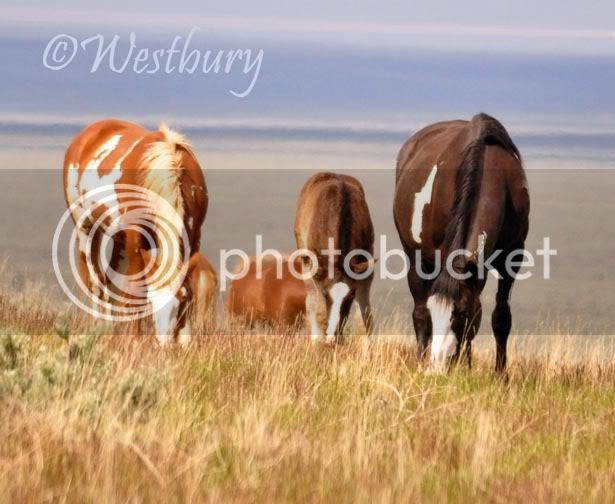 Cruiser (yearling colt), on the left, and Chenelle on the right. 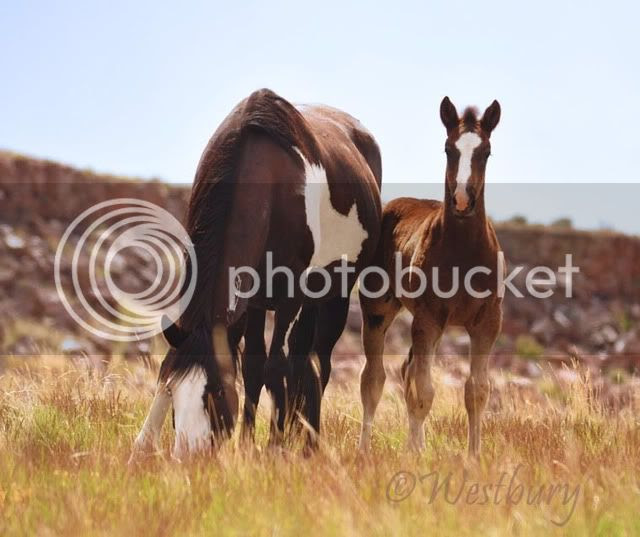 My knees are weak, I swear! 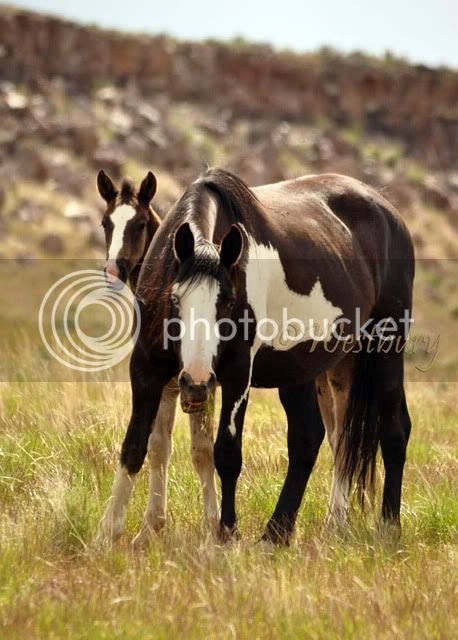 Is that a cow horse look on Chenelle, or what? 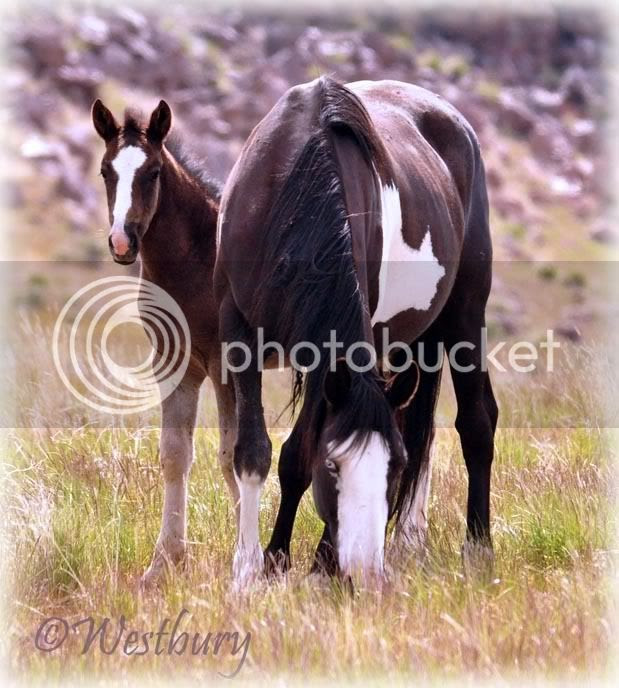 Peeking from behind momma.

But the real question is...
Who's the Stud Muffin's Daddy? 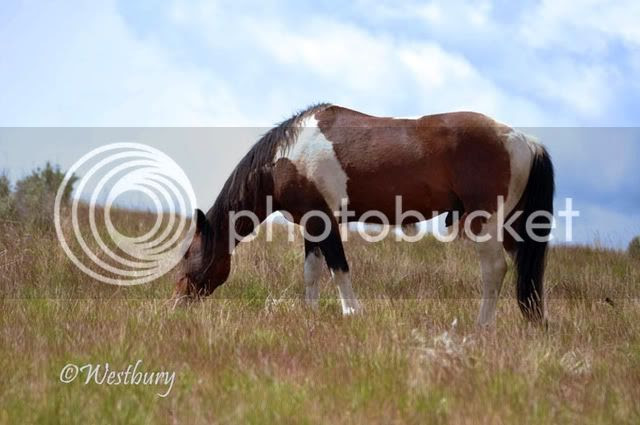 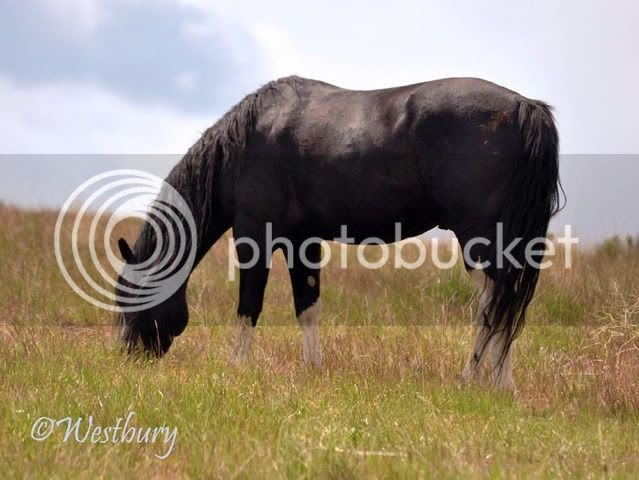 Both of these stallions are with a small group of mares. Cascade, the pinto, is the clear band leader. However, Sox is his number two in command and is never far away. So who sired my little heart throb?
Posted by Tracey at 6:19 PM 10 comments: Links to this post 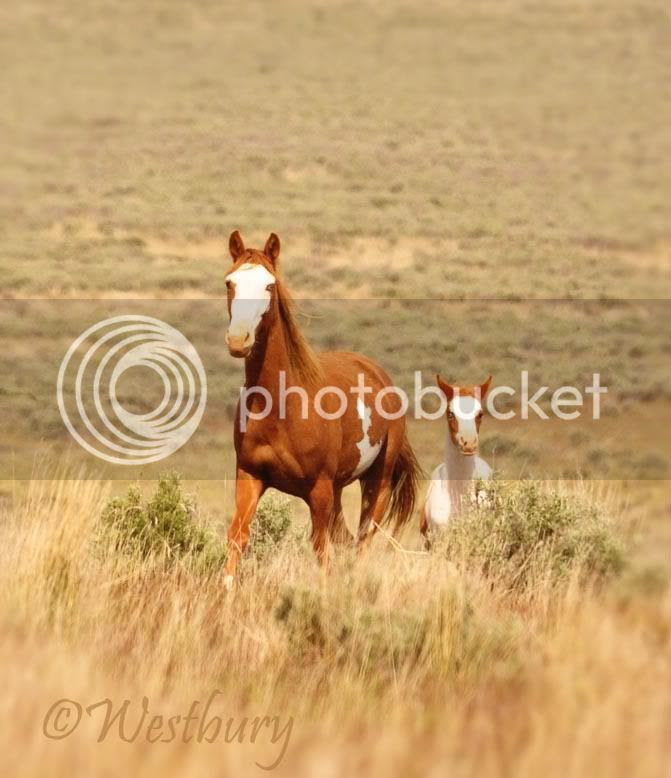 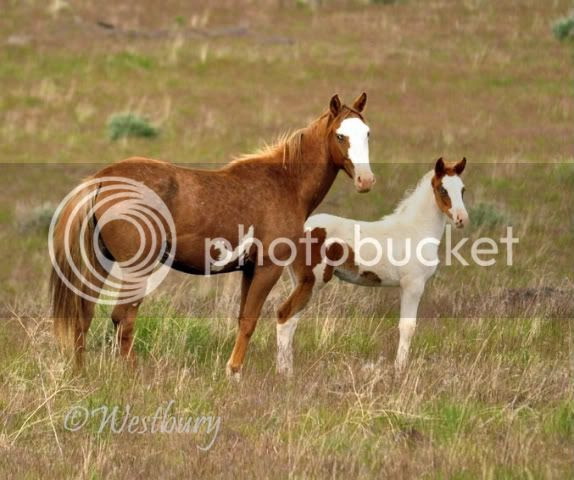 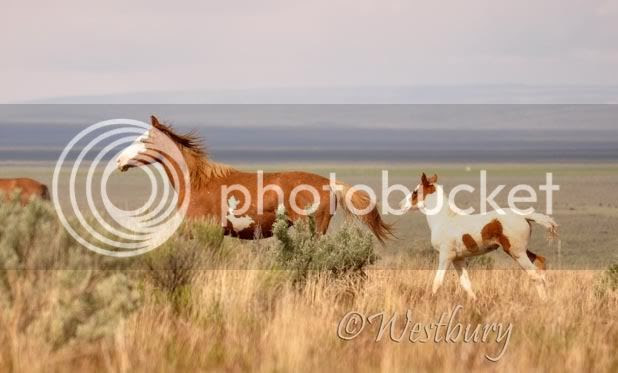 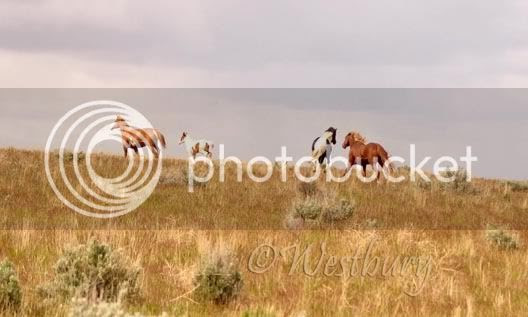 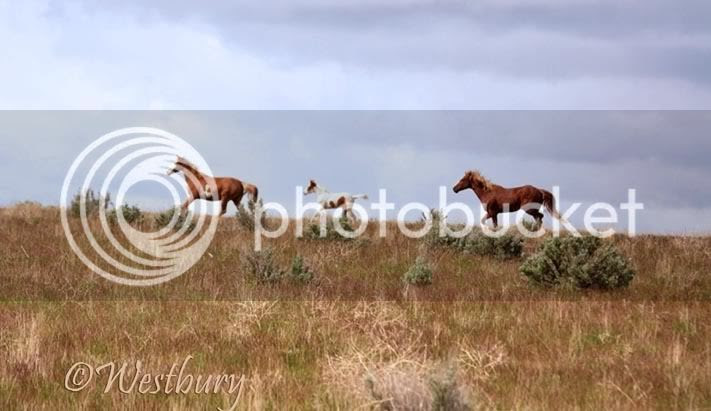 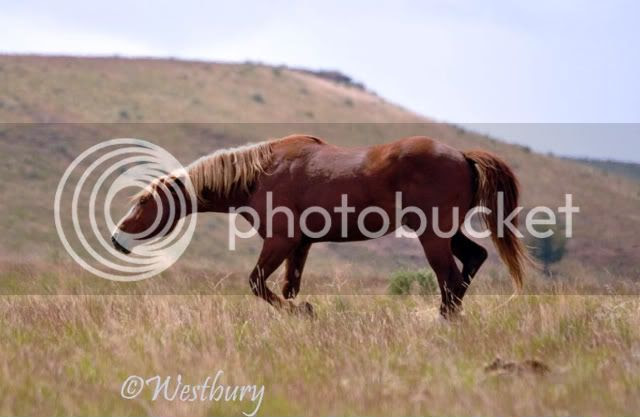 She is, without a doubt, a fruit loop. In fact, that's what we call her. Fruit Loop. She appeared out of nowhere and attached herself to the bachelor band over the winter. We didn't know she was a mare at the time, just another red horse spotted with the boys. But then it was spring, and guess what? The Fruit Loop had foaled, giving the boy band a Lucky Charm.

She sure has stirred things up. We wondered at first, did her stallion die? Is this why she attached herself to an easily accessible band? But I'm not so sure. Red Vogue, the brilliant red three year old, wants to lay claim. The other boys don't care and there are no challengers from among them. A hands down, easy win, right?

Wrong. Because Fruit Loop wants nothing to do with him. She runs and races here and there, goofy as all get out, her little Lucky Charm following along, learning bad herd habits. And poor Red Vogue, so exhausted chasing after his wayward woman. She circled the entire herd, roughly 60 horses, and got them all in a tizzy. Red Vouge chased after her, ears pinned, head snaking out in an effort to subdue her. But she will not be subdued. She is a wild one. Or a fruit loop. You be the judge!

Posted by Tracey at 4:33 PM 5 comments: Links to this post 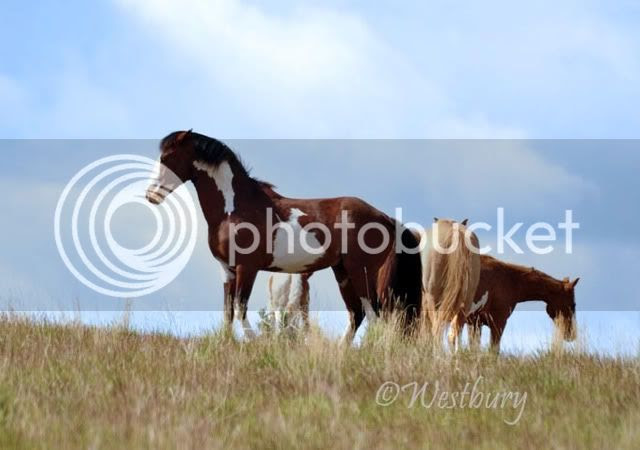 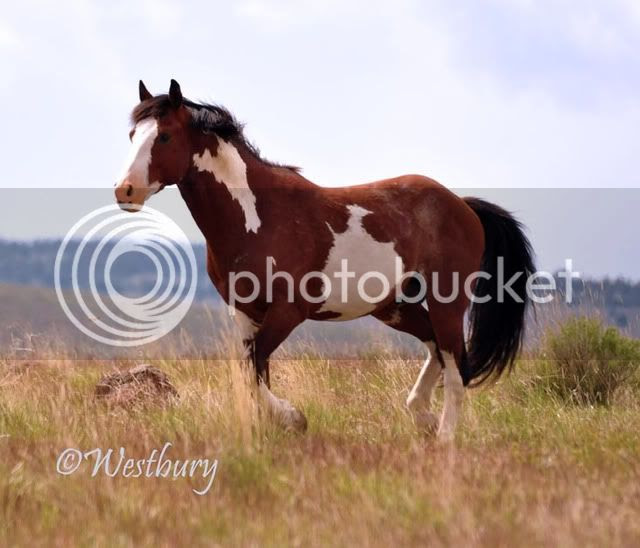 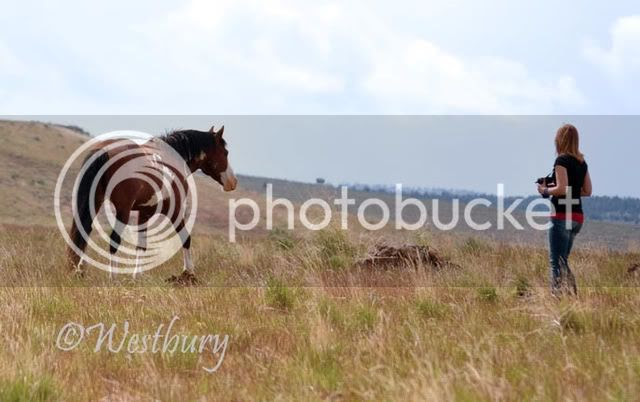 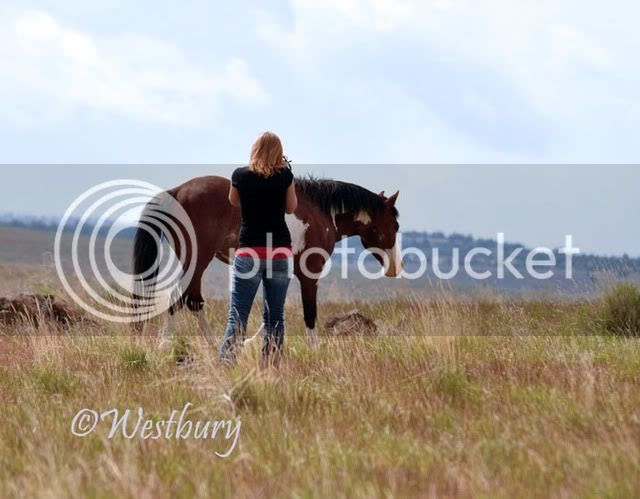 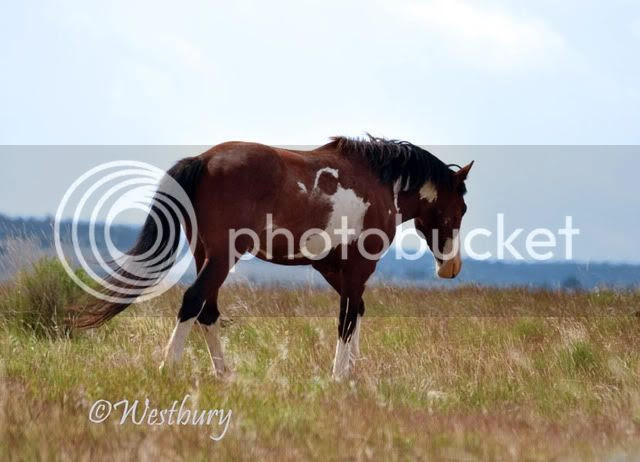 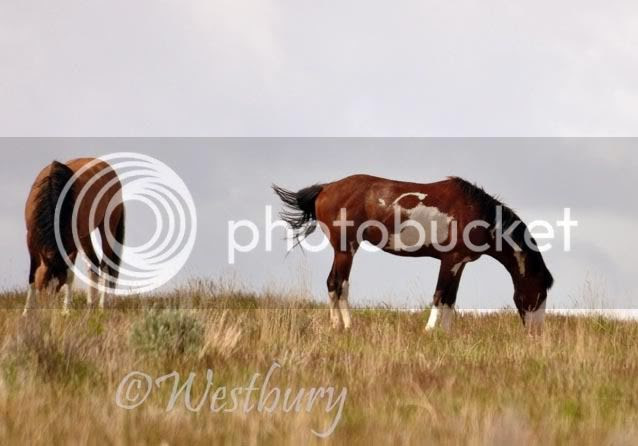 So, while y'all were busy with barbecues and parties over Memorial Day, Darling and I were busy working ourselves to nearly to death.
Yes, that's right. Blood, sweat and tears...and all that jazz. Driving miles, hiking hills, braving the weather (which included snow and hail, I might tell you!) in an effort to photograph wild ponies in the spring. And we did it all Just For You! 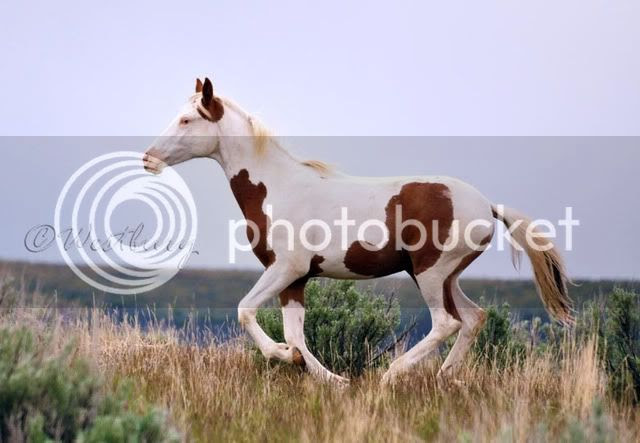 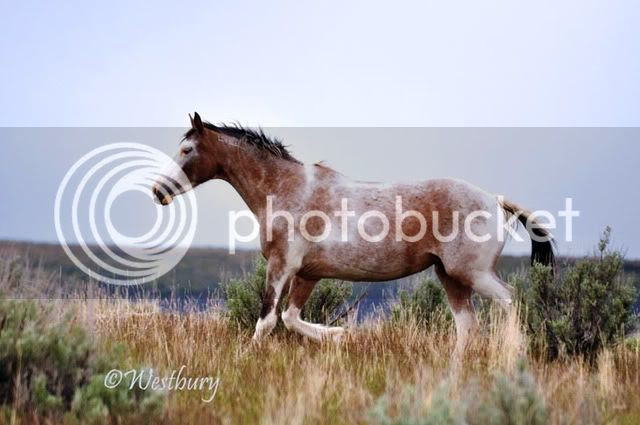 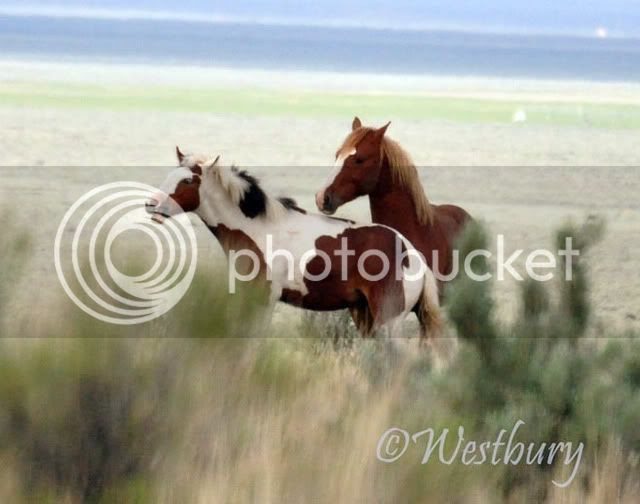 Tell me, was it worth our efforts? Does this make you smile? Maybe? Just a little?
Posted by Tracey at 12:13 PM 13 comments: Links to this post