The horses did great at the fair. Dakota, Emmie and Denny all relaxed and began interacting with the public as the week progressed, with the two geldings working up the courage to start taking treats from the fair going public.

All three are in their adoptive homes, and tonight I heard from Dakota's mom that both he and Emmie are now under saddle! They're working with a trainer who's really helped them blossom into a couple of wonderful horses for the girls.

No sooner had we returned from the fair than I had to jump back into my truck, hauling my trailer back down the road. Dakota and Emmie were heading home, and since I was halfway to Burns it only made sense to continue on south. 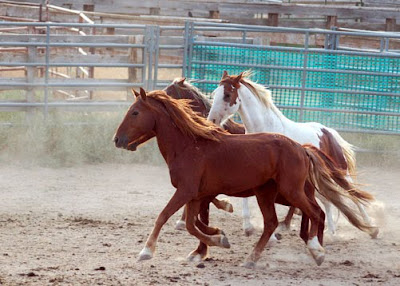 No? It doesn't make sense to you? Okay then...there was another adopter who'd wanted a horse hauled home, making our trip pretty much paid for. Make more sense now?

But the night before we were to leave, I drove down the highway to fill up the truck, only to find the tachometer surging up and down when I traveled between 50-60 mph. Shifted fine, accelerated fine, just had this goofy surge thing. And not even the truck surging, just the tach bouncing up and down. Naturally I couldn't be delivering horses, let alone driving to Burns, if my truck had a serious issue, so a call in to City Boy at work to trouble shoot was in order.

Perhaps it's just the fuel injectors? I ran to Walmart, then Costco, in the morning to pick some cleaner up, then gunned it up the highway in an effort to get things back on track. No surging...must be good to go! Loaded up my two deliveries and off down the road went Darling and I.

20 miles later the revving was back, but thankfully we were just a couple miles from Curt's place, so into the drive we pulled. I dumped Darling at the barn door in exchange for Curt in the cab of my truck and off we went so he could see what was happening. Electrical...nothing like the engine or transmission...at least that's what he figured. Nothing serious, just drive carefully, and with that we were off. 12 hour drive ahead, and we were pulling back onto I-5 at 3 in the afternoon. Good grief...

It was 7:30 before the horses were delivered, and Darling and I contemplated our options. Dusk by the time we pulled back onto the freeway, an hour from the Oregon border...what to do? Drive through? Find a hotel? 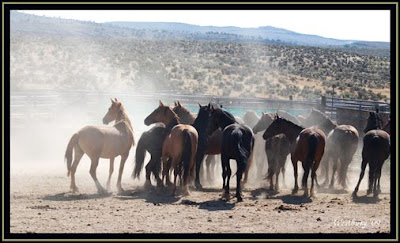 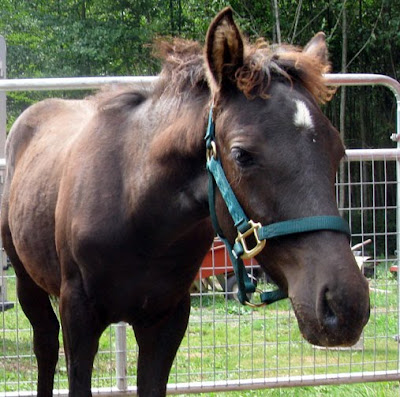 Loading up for the fair! Horses are in the trailer and we're ready to pull out. Stop by if you're in the area! Check out Mustang U for photos of the horses who'll be there.

A Wish For Wings That Work

Darling, as you may have guessed, would like to fly. She would like to fly Air Sandy, but Sandy is not all that keen on going high. His mode of travel is more that of Pony Express, and only that if he's being chased by something life threatening. Let's face it, Sandy would prefer the life of a Banana Slug...slow and steady is his style.

Darling has done well to get Sandy over smallish jumps. We measured the vertical she'd set up the other day and found it to be 2', a very respectable jump, it would seem, and Sandy tucked himself up in flight mode in an effort to avoid slamming his big mustang feet into the rail. But despite the fact that he's figuring out how to sail through the air with the greatest of ease (he's demanded we purchase him a Super Sandy cape), it simply is not his calling.

Recently we met a woman named Michelle. Michelle adopted one of the yearlings from the YAY program, and when she learned Darling wanted to do the whole flying trapeze thing on horseback, she offered to help. So last night Darling and I drove out and she climbed on board a big white steed named Marty. 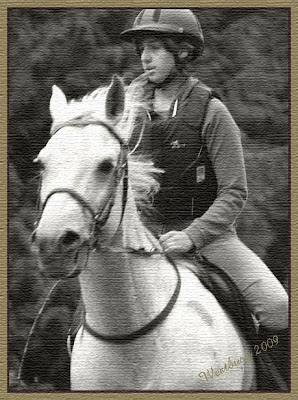 And Darling had fun. 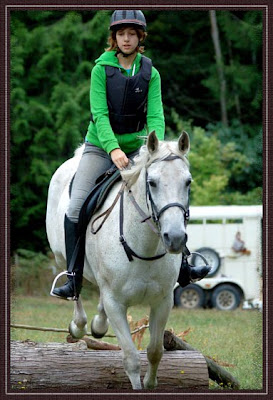 Marty is a pretty steady Eddie kind of guy. Laid back, easy going but with a bit more juice than Sandy. He's got a bigger trot which makes posting a bit easier. He doesn't mind converting himself into a low flying aircraft. Darling spent the evening practicing her two point as Marty hopped over logs and low jumps.

The only mark against Marty is that he's not got that lovely mustang freezebrand we're so fond of. But Darling is willing to overlook that slight defect in the gelding in exchange for flying lessons.


*** My root canal went well. I was sore afterward, and it was difficult to chew for a couple of days, but it didn't seem to slow the food entering my mouth all too much!

Today Darling & I loaded up some panels and hauled them to the fair grounds. On Sunday we'll haul horses to the fair for gentling demonstrations. Are you in the Northwest? Come visit us at the Northwest WA Fair in Lynden. Denny, Emmie, Dakota and Sandy will all be there! 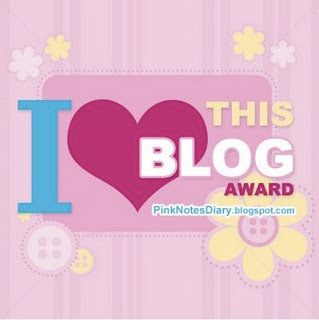 My friend Gena at CTG Ponies has given me an award! Wasn't that sweet of her? Of course, it requires me running about like a headless chicken trying to narrow my favorites down to seven blogs to pass this on to! Which is the unkind part of viruses...er...awards such as these!

But it's well worth it since I've been unable to upload photos from my camera here the past couple of days! Yes, that's right...I've got photos stacked upon digital photos inside that Nikon of mine, but can I get to them? Not a chance. And why is that? Because I'm a moron when it comes to this computer stuff. I used to just take the disk out and slip it into the spot on my computer that I was told to slip it into. And lo and behold, a new window popped up and I could find my photos.

However, that all changed when my old card stopped working, and I replaced it with a brand spanking new card. This new card refuses to be read by my computer, so there sit my pictures...of Dakota and Denny and Emmie...plus Saturday night's bull riding! And here I sit, with nothing to show for all of my shutter bugging.

So thank you, Gena, for giving me this award so I have something pretty to post today!

Now here are seven blogs I love (which in no way means I do not love someone's blog that I may not have listed...)

First, my two riding buddies who love to hit the trails with us mustang girls, Pony Girl and Paint Girl.

Andrea's sister is going through chemo right now for breast cancer. She could surely use some love.

Then there's Gtyyup...aka Karen at Life at the Rough String who lives in a place I love.

A non-blog that I love anyway is Darling's You Tube Channel. I'm jealous of all she can do, aren't you?

And last, but certainly not least...I love the Mustang U blog! (Does that even count?)

Again, Gena, thank you for being so clever as to help me out today with something to blog about. You must be psychic!

Now, for all you who've wished my toothache well, I thought I'd let you know the root canal is tomorrow (Tues) afternoon. I'm trying a new technique called Mind Over Matter to help with the stress of fingers and drills inside my mouth. That and plenty of drugs...
Posted by Tracey at 8:19 AM 7 comments:

When your tooth says...

July was a hard month for me. It truly took it's toll, from the sore throat, to losing my voice, record breaking heat waves where the humidity was so thick I had to swim to the barn. And that same humidity has managed to help along a case of bronchitis (or at least that's what I call it), with a deep, wet, hacking cough from deep down in my lungs that I know, from past experience, will not leave me until I hit some dry weather.

You'd think things couldn't get any worse, wouldn't you?

Enter August, and an explosion of pain in my mouth. Oops...was I supposed to go back and have that root canal finished?

Surely one cannot blame me. I was feeling no pain. No Pain! And then they said to me, "You need a root canal!" So off I trotted way back in February (or was it early March?) to the root canal dentist, who could not for the life of him make me numb. Oh, sure...it felt good and numb to start. My tongue was fat and my lips were blubber, but start up that drill and all bets were off. More novocaine, my nose felt fat, and again the drill brought me to attention. Another needle, my eyes felt puffy, I could barely stay awake...but then that pain shot through my body once again. My heart was racing and I said thank you, but I think I'll be leaving now. They took my blood pressure and it was through the roof. They made me stay in a horizontal position for a few minutes on that chair before slowly bringing me upright, then off to the ER they whisked me.

Oh, I was fine. Nerves, they told me at the hospital. Yeah...well, that was difficult to diagnose, I'm sure.

But I didn't go back. I was feeling no pain on my own, and I had the Mustang Makeover coming up...why put myself through dental hell right before leaving? I didn't have time for this sort of thing until after returning.

Hmmm...okay, so a long time after returning. Maybe after the fair in August?

Nope. The old nerve has decided to wake up and and slam into my mouth like a freight train. I was climbing the walls in pain Monday night, and at the dentist first thing Tuesday morning. Drugs, drugs and more drugs...trying to get the inflammation settled down and the pain to subside. The pain killers seem to bring on a bit of throbbing before they work, though, so I've been sticking to my ibuprofen along with the amoxicillin. I still feel pain, but not as much as before.

But if you've been wondering why the lack of posting the past few weeks, now you know. Sitting here at the computer is no where near as comforting as crying under my blankets. The only reason I'm here right now is because my pillow was getting wet. I haven't got time to be sick or have dental issues! I've got horses to train and a fair to attend in another week! Not to mention Darling & I were supposed to be on our big trail ride (which had been in planning for a year now) in Oregon this weekend. Oh well...guess God has other plans.

Speaking of Darling...look at what she's done to my little western pony! Those fantastic roll backs, hard stops and hydra bull chasing days seem to be over as she's changing him into a...a...oh, I can just hardly stand to say it...a jumping pony!