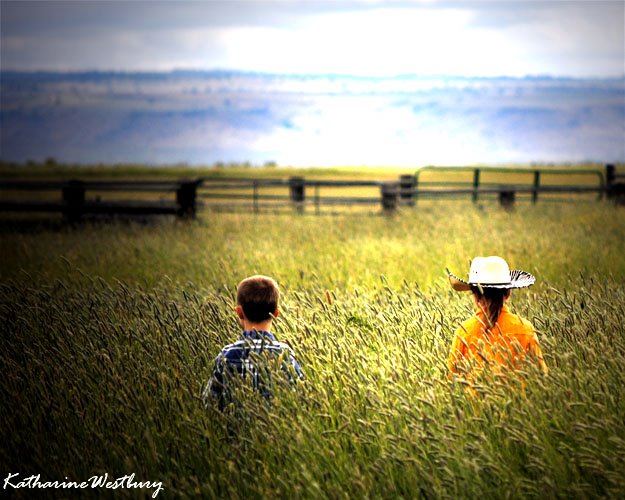 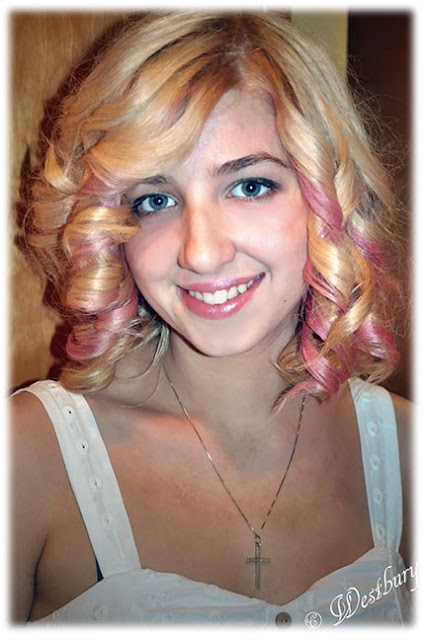 Did I tell you she graduated from high school?  She did.  And with blond hair, too.  And pink.  Mustn't forget the pink bits.  Pink bits are important, you know?

So what are Darling's plans?  Those appear to change on a month to month basis, but what appears to surface more frequently now is a career as a professional photographer.  And, looking at that photo way up at the top, I'm sure you'll agree that the kid has some talent! 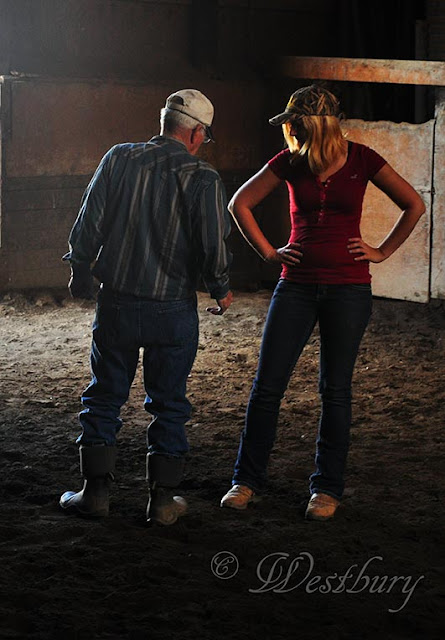 Of course....she could still become a horse trainer!  We've spent a great deal of time down at the Cowboy's this summer, where she's riding Max and her little bay love affair of a horse, Doxee.  In addition to those two, Darling has picked up a big gray gelding that was in need of some consistent riding.  It's been a couple of years since Darling's 'wings' have flown, but with this boy, she's once again in flight, and loving it! 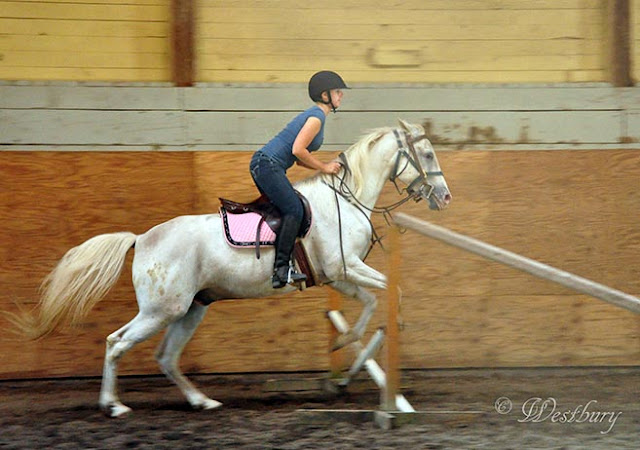 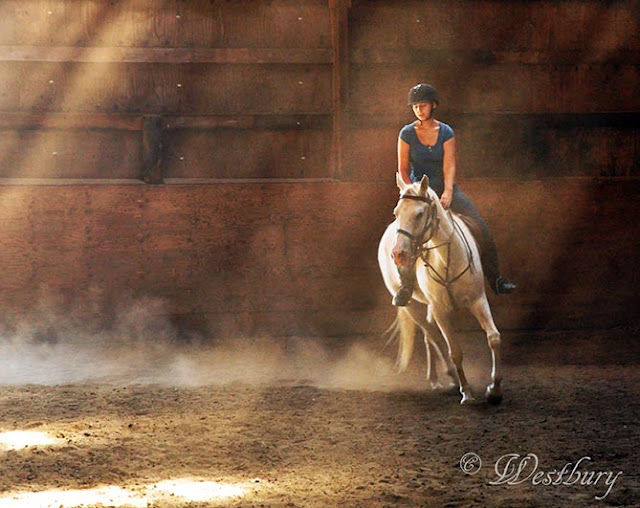 This gelding is for sale, so if you know of someone who likes a light, responsive horse in need of a job, let me know.  He's a registered appy, but half arab.  We think he'd make a super endurance horse, too!

Darling spent the evening debating if she should try to work out a way to hang onto him for herself, but finally decided to go back to her roots when searching for the right set of wings.  We just spent the past hour dreaming and perusing photos from our most recent adventure down at the wild horse corrals, wondering just who would make the perfect flying partner?  Darling, it seems, is still not afraid to ride the brand! 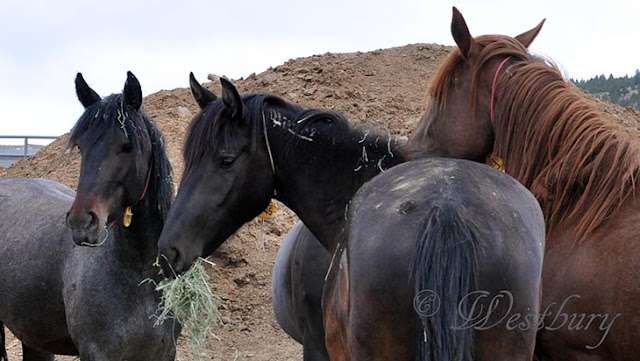 Anyone who says they won't own a mustang because they're "Too hard to train" simply has not met Maxine. There is nothing difficult about this filly.  Nothing at all. 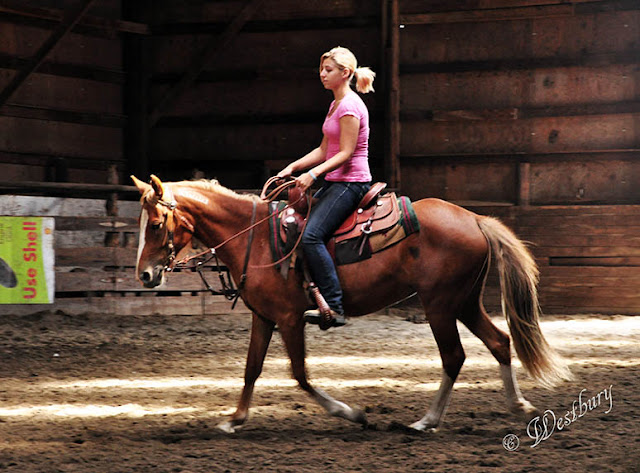 Max is back at the Cowboy's place for a week or so of steady arena riding, where Darling asked her for her first lope.  Day one of loping had Max a little unsure and a bit wobbly in her gait.  I had her at the end of the lunge line just in case there was a bobble from her typical easy going, laid back self, but I needn't have.  Darling managed to coax the filly from an extended trot into a nice, easy lope without much trouble, and Max even picked up the correct lead each direction.

The following day, no lunge line, just me standing in the middle for a little added incentive, and Max again moved into a relaxed lope, this time feeling more confident with a rider on her back. 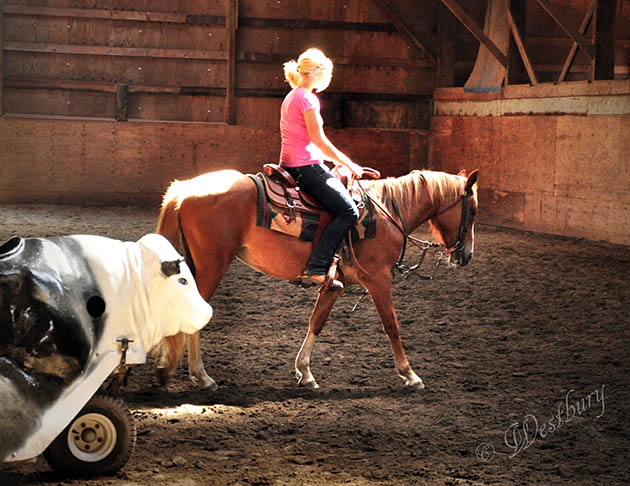 Since we have the opportunity of hanging around during lessons with the HydraBull, we absolutely take advantage of it!  Obviously, Maxine is terribly bothered.  Not.  With the bull zipping back and forth, Max hung out at the end of the arena, completely relaxed.  Once the lesson was over for the other rider, Darling and Max went out to circle the bull, left and right, getting her used to being up close and personal with it. 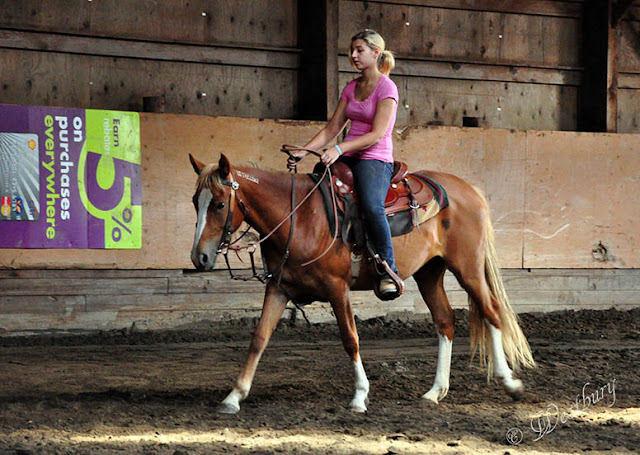 Some of you have asked if Max is going to stick around here.  The answer is a definite...I dunno, maybe for a little while?  I'm doubtful at this point that she'll get tall enough for City Boy.  As nice as this filly is, we're thinking that she's going to make a bang up of a youth horse for someone a year down the line.  In the meantime, we'll simply enjoy her, get her broke, take a few trail rides and see what happens.
Posted by Tracey at 8:39 PM 7 comments: 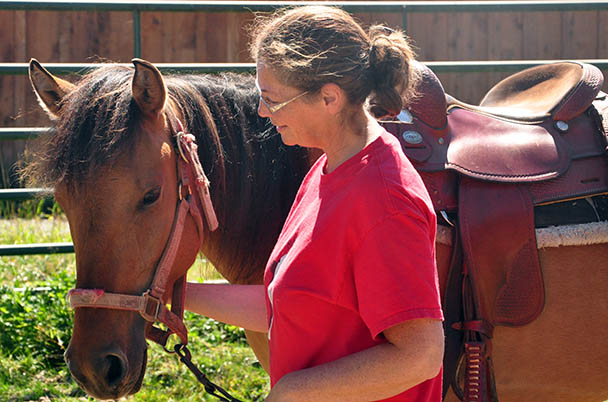 Impulse had a big weekend.  With all the weight she's lost, and given how slowly she was eating, a visit from the vet was in order once Grace was weaned so that we could deal with her teeth.  While there were no points to have interfered, she'd recently lost her last set of caps, and that, he said, made it more difficult for her to maintain a good, healthy weight once Grace was foaled and began nursing.  Thankfully, the past couple of weeks out on some (rather dry) pasture has helped her start to fill out again.

In addition to the vet, Impulse also had her feet trimmed for the first time.  Farrier Andy Colton did the job, and I must say he's an excellent choice for a horse who's lacking in confidence when having feet handled.  He took his time, but also helped her understand that she had nothing to fear.

The following day, with less toe to hinder her, it was off to the round pen where we worked a few minutes, then  back to the barn where I tossed the saddle pad up onto her back.  With no reaction (it's been done before, but she's not liked it and it's been a few months), I figured maybe it was a good day to also see what she thought of a saddle?

Turns out that while saddles have a funny look and smell, she didn't mind in the least when I set it onto her back.  I didn't tighten the cinch yesterday, but today, I did.  And I lunged her in the round pen with it, too!  She didn't bat an eye.  Didn't care one way or the other about being cinched up, stirrups banging, or saddle squeaking.  What she's not so hot about is me bouncing alongside of her, so that is my project with her for this coming week...get her used to bouncing, so that we can start bouncing in the stirrups! 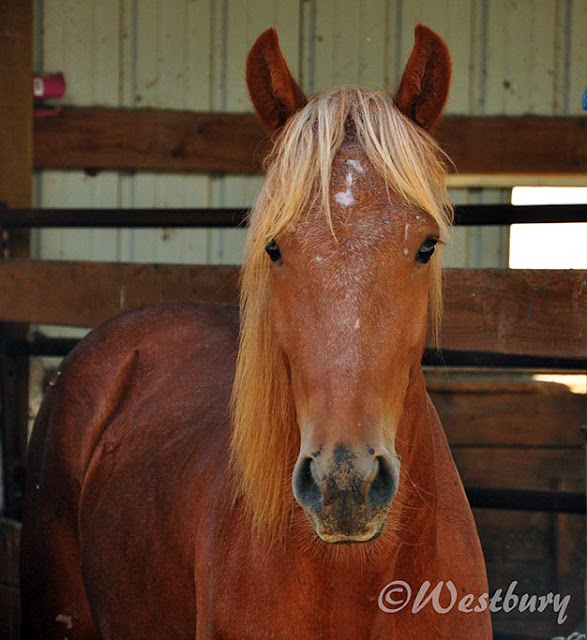 You may recall our Weekend Getaway from a few weeks back when we visited the wild horse corrals and spotted a couple of cute geldings.  Well, when a local rescue hosted a clinician who wanted an unhandled horse for their demo, they came to me to see if I had a mustang that would fill the bill.  I arranged for them to pick up that oh so adorable chestnut gelding that I'd spotted while riding the hay wagon.  Once the gentling clinic was over, he needed a place to stay for a few weeks until the next adoption in WA state, so of course I was willing to do that for them! 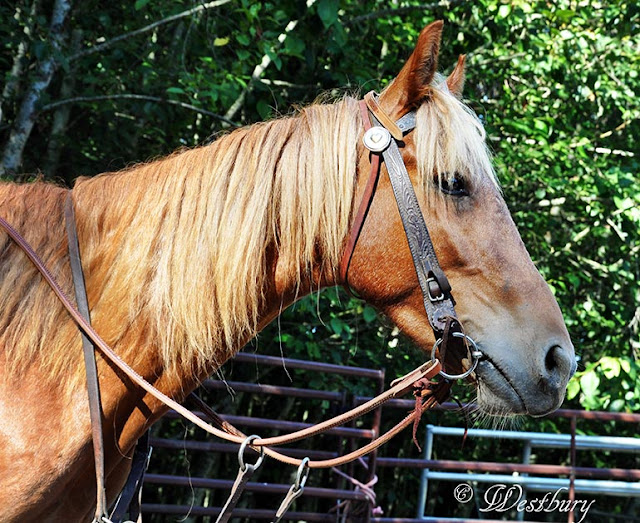 And being as I can't just leave a horse sitting out there, especially not one as cute as this, I had to start messing with him.  He didn't bat an eye about the saddle going on or being cinched up.  The bridle made him wiggle his tongue a bit, but overall, this colt is an absolute dream.  And I had to name him something while he was here, did I not?  And since I'm always chasing a dream of some sort around here, Chasing Dreams, aka Chase, is his moniker. 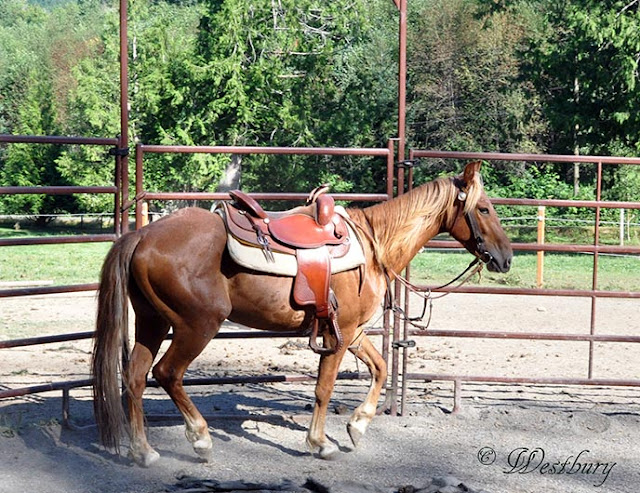 Anyone looking for a nice colt?  Three year old gelding from Three Fingers HMA in Oregon.  14.2 hands tall and an excellent disposition!  Whopping $125 adoption fee.  Seriously...take him before he ends up staying, please!
Posted by Tracey at 3:24 PM 4 comments:

Darling climbed onto Max today and took a little ride through the trees.  This was Maxine's first venture outside of an arena/round pen setting, and she did great! 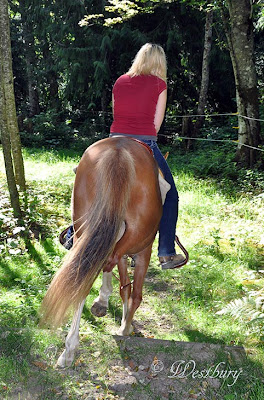 First 'obstacle' she encountered was the step down.  Not that she's not been there or stepped down it before, but with a rider perched on the back, some horses feel uncomfortable and will hesitate or spook.  Not Maxine.  She just stepped down like she'd been packing a rider every day of her life across such things. 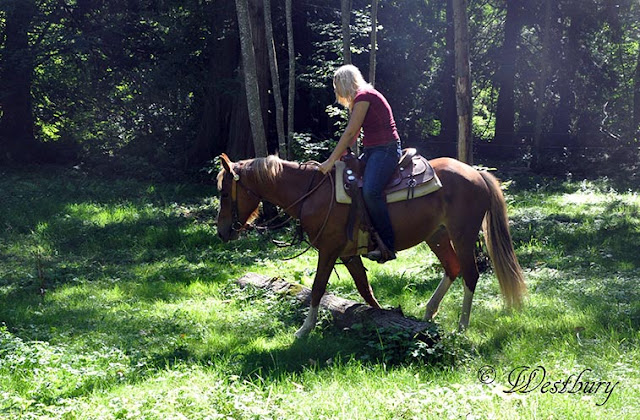 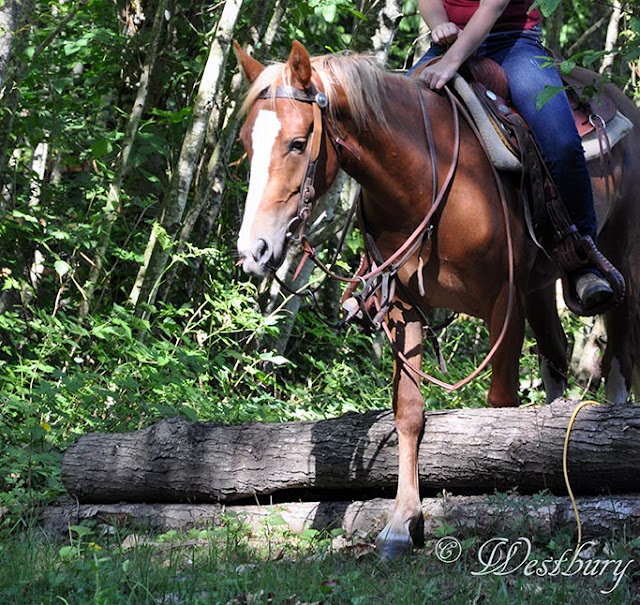 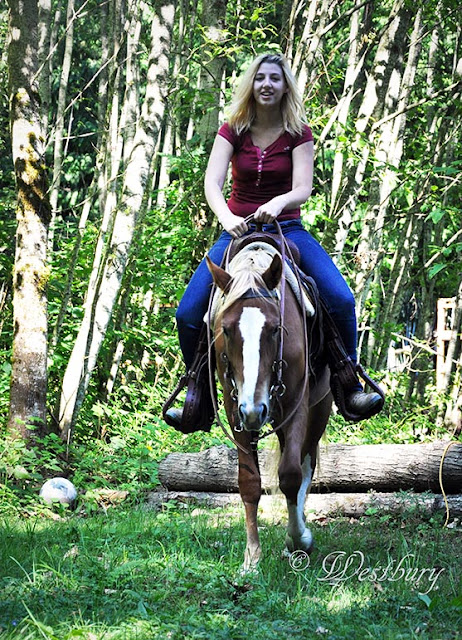 There was no stopping these girls.  Loose reins and all, Max just dropped her nose and went where Darling's legs told her to go! 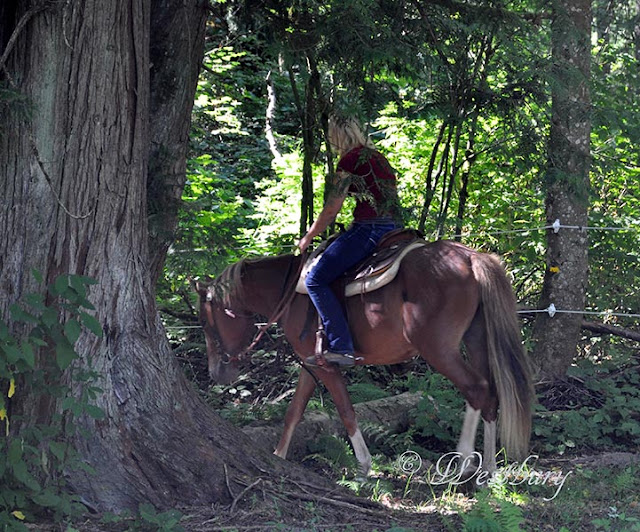 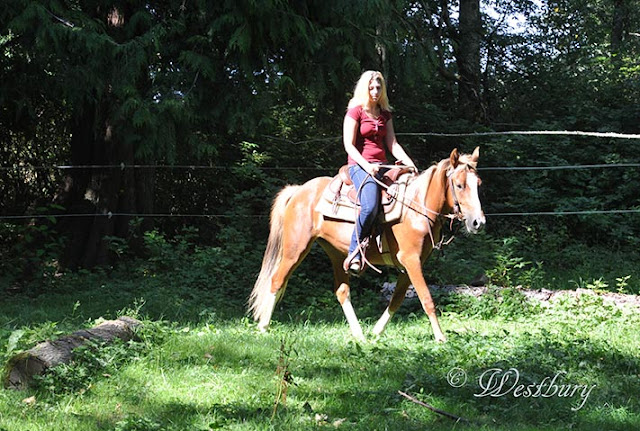 It wasn't enough just to walk over logs, we had to see what she'd do at the trot, too.  So after a few circles around the trees, Darling pointed Maxine's nose back to a log.  We both anticipated the filly to stop, or at least break down and slowly step over.  We were so wrong!  Max kept a steady pace and trotted right over! 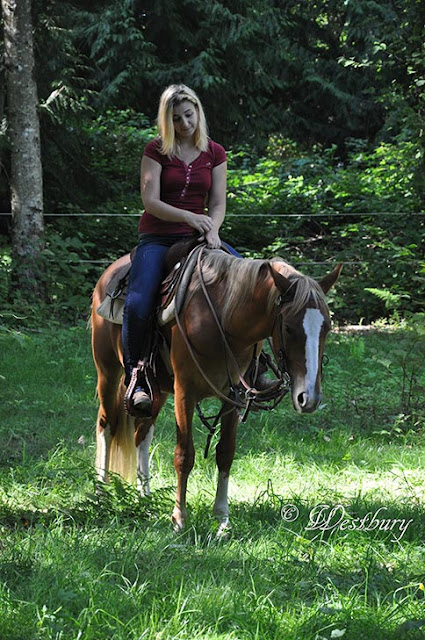 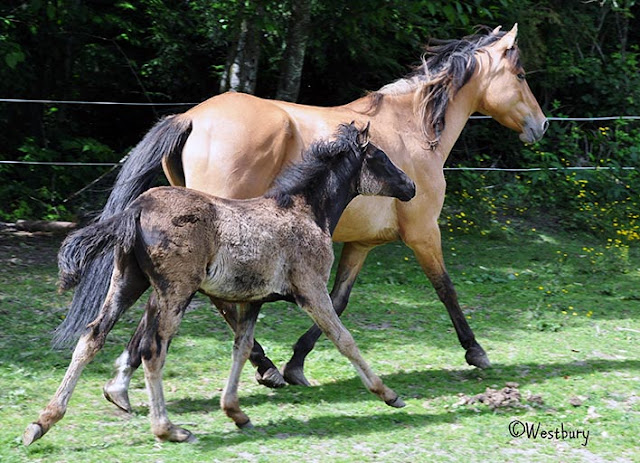 Typically, I'd like to wait until a foal is 6-8 months before weaning.  I mean...in the wild, they'd never wean earlier than a year, and even then babies are with their dam for 1-2 years.  But in case of Impulse and Grace, an early weaning at the age of 4 months simply had to take place.  For you see, the past month has seen Impulse dropping weight off her already slight frame, to the point of me becoming quite concerned.  Her teeth most definitely need to be looked at, but of course while nursing there is no point, as we cannot drug her to do any work.

Luckily, Grace has a decidedly independent streak, and at roughly 4 months of age she began loitering with Auntie Tika, Maxine, or simply hanging out alone in the barn rather than sticking close to her mother's side.  And with that, Impulse was loaded up and hauled down to the Cowboy's where she can eat her own feed without a little monster there to steal it away. 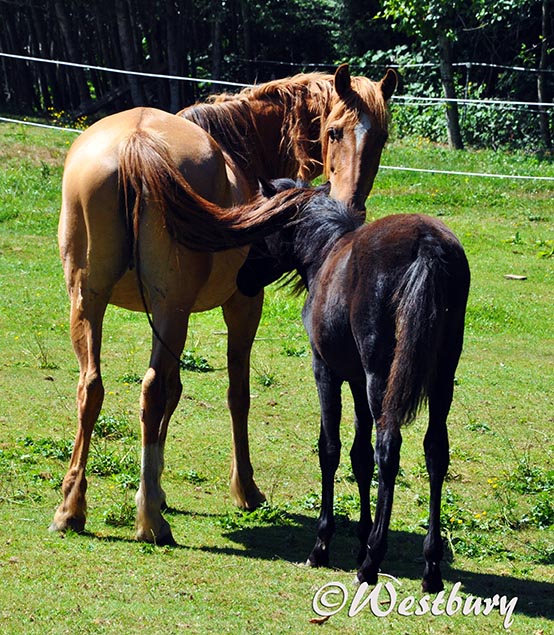 Onlookers would never know that Grace did not belong to Tika.  Being the good, maternal mare that she is, Tika allows little Grace to stand alongside, eat out of the same pile of hay, and happily swishes flies from the wee one's face just like her mother did. 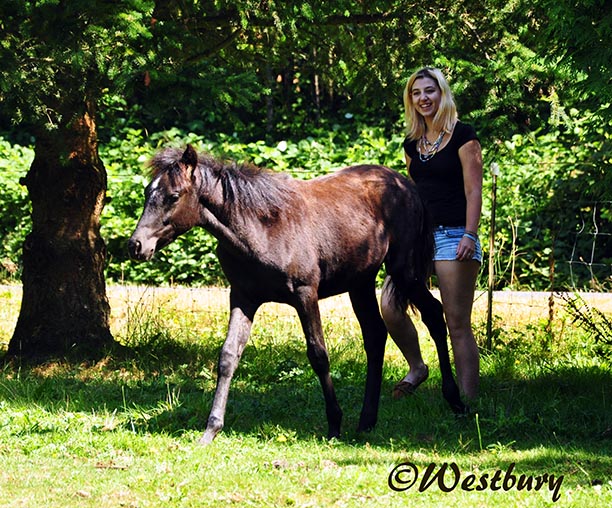 Darling had fun antagonizing the little stinker this afternoon. 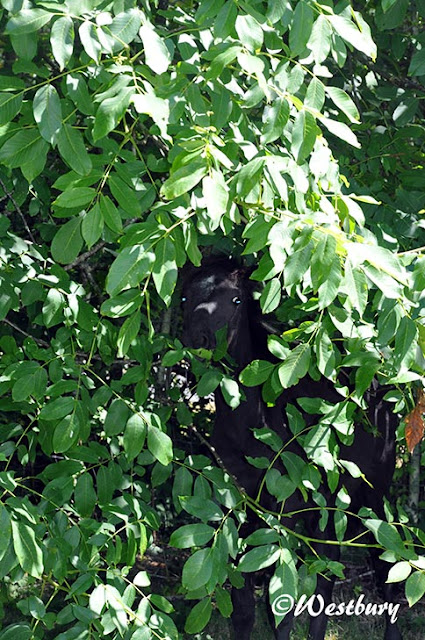 While Spud and Tika stood out in the sunshine grazing, little Grace found a nice, cool spot in the shade where she hid from spying eyes and camera lenses.  You can't see her, can you?  She didn't think so...

Grace obviously went unscathed by her mother's disappearance, and Impulse?  Well, she's not seeming to mind, either.  She's now able to eat as much as I put in front of her without the little monster gobbling it all up.  Hopefully we can get her teeth done soon, and some real weight put back on her body.  She's been a good momma, giving it all to little Grace!
Posted by Tracey at 10:11 PM 3 comments: