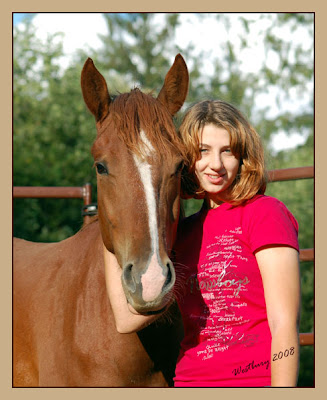 For the past couple of months Dude has been on stand by as I've headed up into the hills with Jet or Sandy. He's stood in his paddock as I've pulled out other mustangs and halter broken them for their new owners. And he waited around while Darling and I went to the fair without him. In that time he's gone from being unsure about people getting into his personal space to what we like to call a pocket pony. He follows around like a big pest and you need to watch your toes or you may find him standing on them in an effort to get your attention. Dude is a people horse.

With the fair over and the excess horses moving out, it's time for me to shift my attention to Dude's training so that he'll be ready in the spring for Darling to begin riding. On Monday I drug my trusty rope out into the round pen with him, did a bit of lunging and then wrapped the rope around his belly to see what he thought about the pressure. 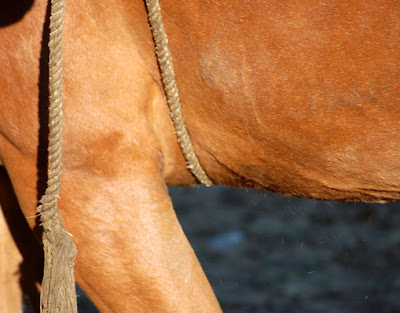 The pressure didn't bother him. He let me reach my arm under his belly without getting at all goosey about it and wasn't bothered by the feel of the rope cinching up. The saddle pad slipped up without any issue. So out came the old, beat up, made in Mexico saddle that has taken a licking and kept on ticking. 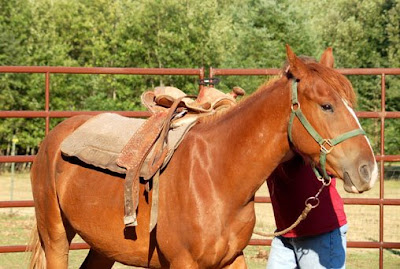 Up and down, up and down, I tossed it over his back. Three times, then leading him around while I carried it in my arms. Then three times more, and back to leading. Never up there long enough for him to think about it. At first he thought me a bit looney to be putting that up there, but by the third set of up and downs, he was no longer caring, so I led him in a small circle. No cinch to hold it in place, just the weight of something up there. 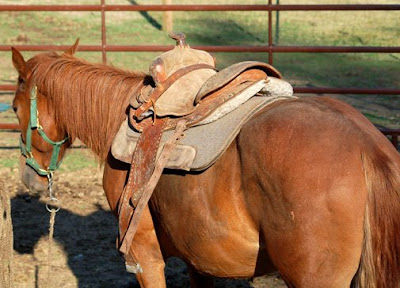 Dude, you gotta be kidding me! Piece of cake, man!
The following morning (without my camera girl present) I once again tossed the saddle onto Dude's back. This time I added the cinch, and other than a few unsure steps backwards as I began to tighten it, he didn't offer up any objections. I lunged him at a walk and trot both directions, and the feel of the girth beneath his belly didn't appear to give him any grief. At this rate it won't be long before this little guy's an old broke pony!
Posted by Tracey at 6:51 AM 6 comments:

Let That Be Enough 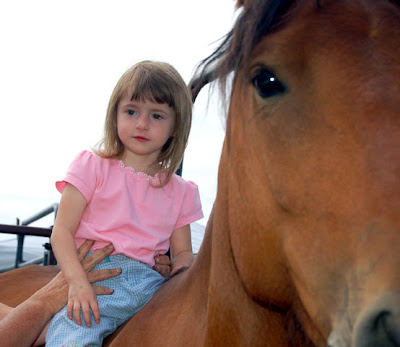 "Thing 2" sits atop Sandy while at the fair

The heat was nearly unbearable last week. I hauled four horses up to the Northwest Washington Fair on Sunday; Sandy, Firecracker, Duns and Magic. Sandy was there for display purposes only while the other three were up for adoption.

You may recall that Skittles was going to take Magic, the dark appy. But after a bit of thought she and her husband decided they weren't quite ready for a horse, and I must admit a bit of relief as I was beginning to question if this was a good match or not. Magic is a very strong horse, and in the hands of someone soft and gentle he had the potential of becoming a very pushy horse. So Skittles is disappointed, but we need to get her the right animal for her personality, and Magic needed the right person in his life as well.

So...unbearable heat. Four horses. The temps reached over 90 and I swear the humidity was right there as well. I did gentling demos with FC, Duns and Magic all week. Duns hadn't been touched prior to Monday morning, so people were amazed that by the end of the week he could be led around and touched. He's a timid sort, so he wasn't coming along as quickly as Magic who was letting me toss the saddle on and off his back by the end of the week. 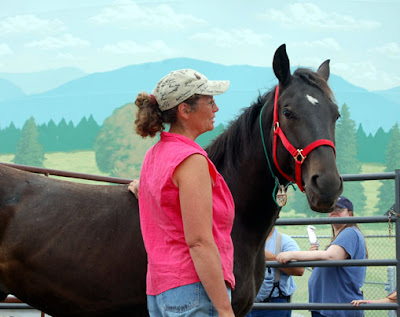 Magic lets me scratch his withers and shows off his new red halter.
Both geldings and Firecracker found new homes. FC's new mamma is wonderful! Years ago I used to work with her and she just happened to be at the fair and fell instantly in love. I spoke with her yesterday and she told me she looks into FC's eyes and her own eyes fill with tears. Magic has gone to live with a therapist who'll be using him in her practice. And Duns, our timid two year old, has found a 13 year old girl who's just as sweet and quiet as he is. He's staying here until her dad can get the panels set up. She came to visit him last night and it was the first time she was allowed inside the pen with her new horse. Duns saw me hand the rope over to her and rather than looking and trying to follow me, he walked willingly behind his new girl.

I can't tell you how pleasing it is to know that all three horses have found such wonderful homes that fit them so perfectly! Despite the heat it was a very good week with a lot of public education on the adoption process and three horses in new homes.

Sandy and the Bull

There's nothing better than a photograph of yourself to send you straight to the kitchen in search of foods that are not good for you. The chips were stale, so I decided to eat the Rolo's for a pre breakfast teaser.

Sandy and I hauled down to Curt's for a lesson. I had Darling come along because we've been working outside in the sunshine, and I knew she could get some good shots. But the track which the bull sticks to had been turned up, and Curt had us inside. So I'll blame the fact that you can't tell that I've lost ten pounds, that I'm leaning forward, and that my toes are definitely not up on the poor lighting. Sound good to you? 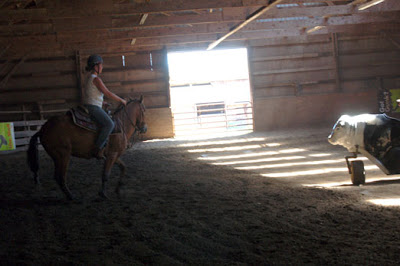 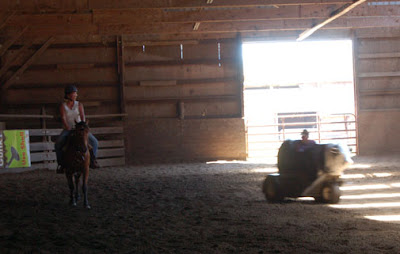 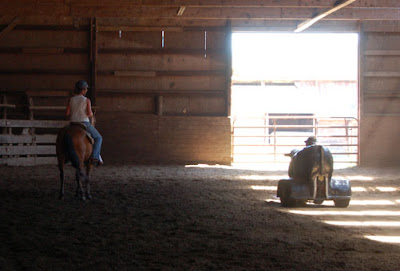 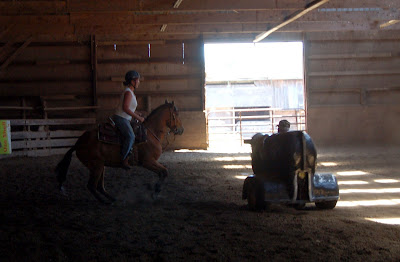 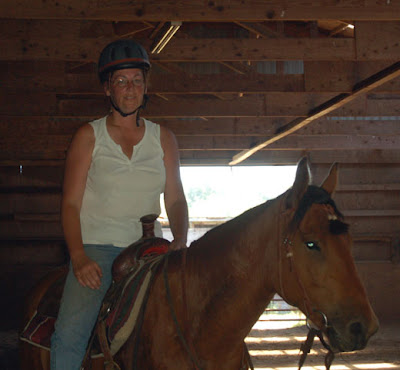 You have no idea just how hard it is to get this wild horse to work on a warm day! I'm pooped. Sandy worked up a sweat, too.

Curt sent us home with dry work assignment...dry work is when you haven't got the cow. And he says it's time for Sandy to grow up...which means putting some spurs on my heels. Sandy's a bit sluggish and isn't wanting to move off my legs, so spurs were always in the plans. I rode with them yesterday and it was amazing the difference one little poke in the rib cage makes!

It'll be a couple of weeks before I can get down there for another lesson, and hopefully by then we can correct some of the flaws we've got now. Toes up, heels down. Sit in the center of my saddle and slouch like an old cowboy. Lose 10 more pounds...
Posted by Tracey at 7:12 AM 8 comments:

John, have you come to visit me here on my blog? Do you like the pictures of Sandy? I hope so! 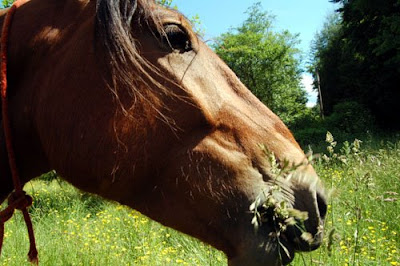 Sandy and I went for a ride the other evening and on our way home we came across John and his family out for a walk. His mother tells me that he'd asked how to spell 'horse' and was pointing out horses that looked like Sandy on the internet!

Sandy always enjoys his visits with John when we meet him on the trail and I think John does, too. He's gone from a quick touch with his fingertips to a full hand rub on Sandy's forehead. I'm very thankful that we've met John, he's helping Sandy gain confidence when he's out on the trail. I've told John that he's Sandy's good luck charm. 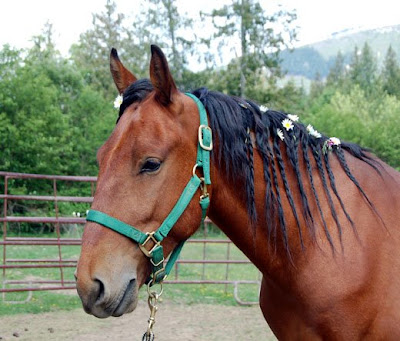 Doesn't Sandy look beautiful? One must be very secure with one's masculinity to allow teenage girls to braid one's hair and adorn him with daisies... 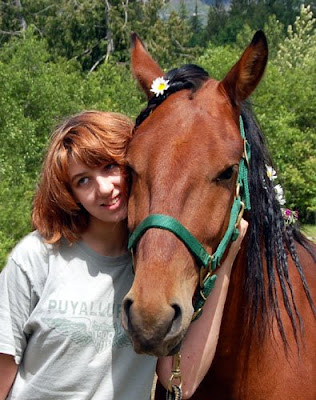