Recently, Darling and I traveled south for a couple days to visit our favorite ponies, the wild mustangs of the South Steens, bringing along my niece, Miss Banana Head.  Her Christmas gift this past year was a trip to Oregon with us, and it only took us six months to get it done.  Was it worth the wait?  You bet it was! 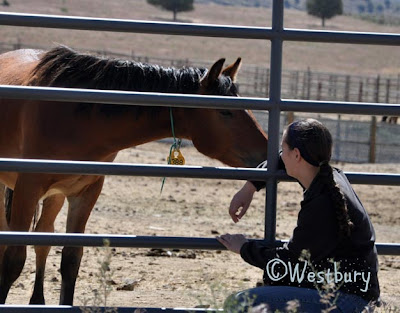 Miss Banana visits with a yearling at the Wild Horse Corrals

As is our custom, we left our home late in the day, traveling through the night, in the dark, across mountain passes from Northwest Washington  and down into Oregon.  By the time we hit Grass Valley, Oregon, the sky had the first hint of dawn's early light, and Darling took over the driving while I snored away in the passenger seat.  We pulled into the Wild Horse Corrals about mid morning, surprised to see the gate open since they're normally closed on weekends.  But lucky us, there was a special tour going on, so in we went, waved at some friends who work with the BLM, and made our way out back to investigate the horses.  Both Darling and Miss Banana made friends with a couple of curious yearling geldings.

Our stay at the corrals was brief...a happy, unexpected stop on Saturday morning.  We were back on the road within 30 minutes, heading to the Bell A ranch where the High Desert Cutters were holding one of their summer competitions. 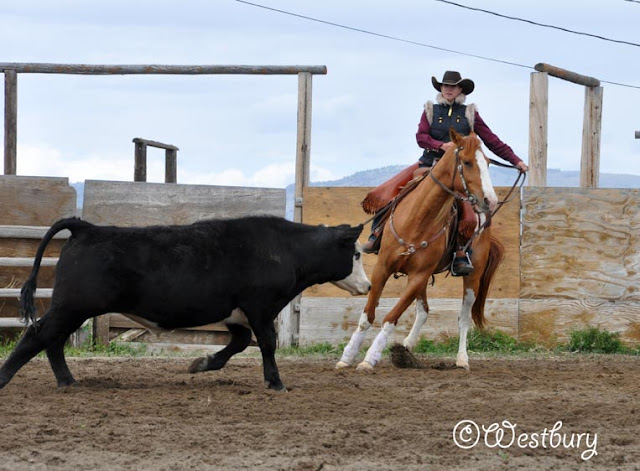 Cutting is fun...but certainly better when you're riding a mustang!  Here is one of the BLM wranglers, who has both Quarter Horses and a handful of mustangs that she rides.  In this particular class, she's riding her 3 year old South Steens mustang, Junior, who is learning the basics this year.  Most of the horses in these classes are ranch horses, used every day to drive cattle, rope, drag calves to brandings, etc, so they're much taller than what we see at cuttings in my neck of the woods.  It always makes me giggle just a bit (inwardly, of course...!) when I hear folks talk about mustangs being small and scrawny.  Maybe they need to meet Junior? 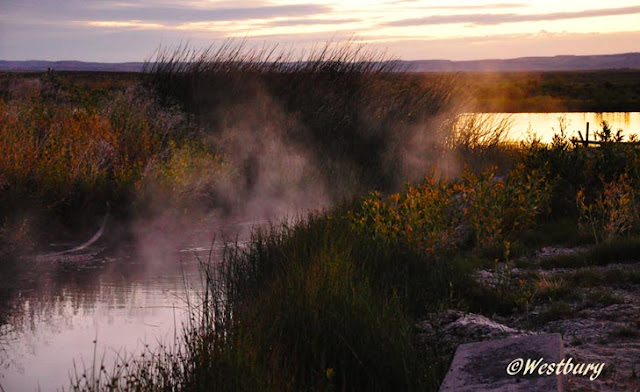 
From the cutting, we made our way south toward Crane, Oregon.  This was a bit of a new direction for us, but I'd found a lovely little place to stay called Crystal Crane Hot Springs.  You rent a cabin, and if you're lucky you get the one with the little half bath or you're stuck using the community restroom.  We were lucky.

The hot springs had a naturally heated pool, which was 97 degrees the day we were there.  Oh...so warm!  We waded about in it before the mosquitoes came out in the evening, and I decided I need a hot spring in my backyard.  Do you think they sell them at Wally World?

The following morning we were up early, with an anxious Banana Head waiting to see what she'd traveled so many miles for.  Wild Horses!

We spotted them up along a ridge, about a mile from the road.  The highway through the desert has extremely wide shoulders, making it quite easy to pull a vehicle off the road and park it, which is what we did.  We climbed over the fence that keeps horses from wandering onto the the highway and began our trek up the hill.

This particular group of mustangs are known as the Hollywood Herd, as they are typically hanging out not far from the road where people can see them.  Photographers visit frequently, and the horses are typically pretty content to just hang out, so long as the two legged intruders don't appear threatening.  The three of us didn't walk straight into the herd, but weaved back and forth, meandering a bit, casually approaching and trying to give the feeling of, "Oh, we're just out for a Sunday stroll.  Didn't see you there, how are you doing today?  Well, we'll just park ourselves over here and rest a bit, if you don't mind," so as not to alarm anyone. 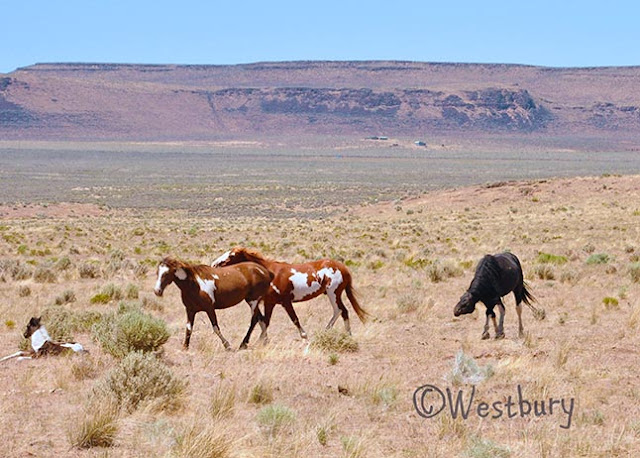 Sox let's Cruiser know that Chenoa is off limits

We saw many faces familiar to us, introducing them to Miss Banana Head so that she, too, could know them.  I didn't get a solid count, but there were roughly 70 wild mustangs standing up there with us.  The South Steens has 130,000 acres set aside, and a recent fly over showed a count of 330 head of horses, not including this years foal crop.  By next fall, they will likely gather horses off this range again, placing many up for adoption. 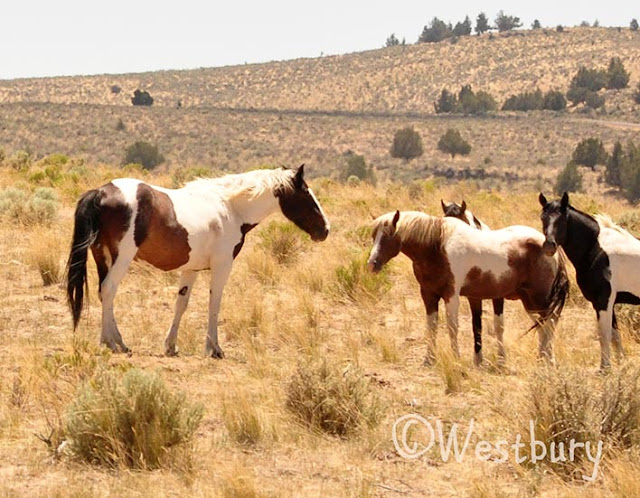 Miss Banana gave Faith her name during this visit.

While many mustangs are put up for adoption, there are several who are left out in the wild.  For instance, Faith, the mare on the left.  We first saw her after the last gather in 2009.  She was at the wild horse corrals where she'd been kept over the course of the winter and following spring.  She'd foaled, a lovely colt that was marked just like her, and once he was weaned, she was returned to her mountain. 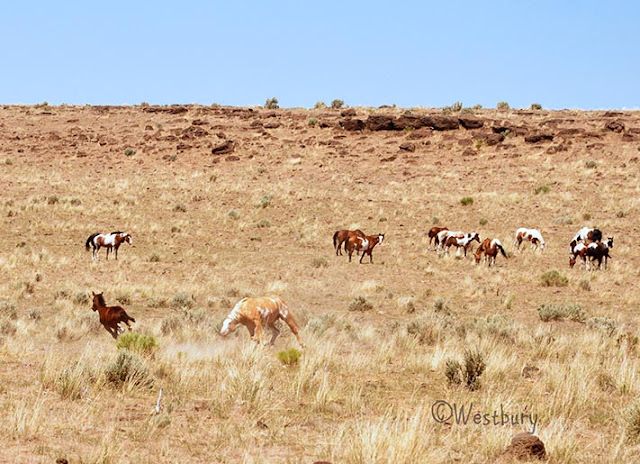 New to the Hollywood Herd is Drifter, a striking palomino pinto stallion who'd been spotted earlier this year in the back country.  At some point, he began hanging about on the fringe of Ranger's band, slowly working his way into being accepted.  The Hollywood Herd is made up of several smaller bands, which change now and then, but mainly stay with the same core group.  Stallions, unlike what most of us imagine, allow other stallions into their band, but typically it's a senior stallion and a junior stallion, and no more than that.  Drifter is now Ranger's junior stallion, and as such, he has a job to do.

At one point, Ranger and his band wandered down the hill a ways, but a sleeping colt was left behind.  When he woke up, he galloped and whinnied frantically, looking for his mother.  While his mother paid little heed, Drifter heard and recognized the voice of the colt.  From 1000 feet away, he stood and called to the colt.  When the colt finally realized where his band was, he started down the hill.  Drifter came charging up to gather him, pinning his ears in mock anger, scolding the colt for not paying attention.  All was good and safe this time, but a lagging colt could bring danger not only to himself, but the entire band, and Drifter wanted to make that clear.  I find it absolutely amazing how this horse stepped right up to the plate after being allowed to join up with the others.  If something ever happens to Ranger, Drifter will be right there to take care of his band. 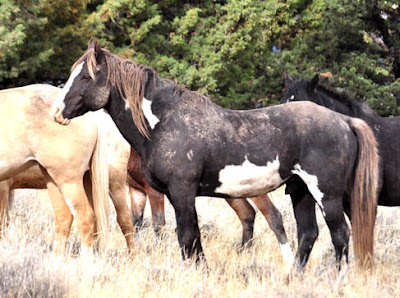 Majesty, a lovely Silver Dapple in color, was put down due to severe injuries.

Two horses we missed seeing on the mountain this visit were Majesty, who suffered a fatal injury earlier this year.  He leaves behind a legacy of silver dapple offspring on the mountain.  Majesty had a second in command; One Eared Jack.  When we lost Majesty, the mares simply followed Jack, with little disruption to the band.

By stark contrast, Golden Boy had no other stallion with him.  Often found just outside of the Hollywood crowd, GB was a loner who kept to himself.  He had a colorful group of mares, and they were highly devoted to him.  While other stallions had skirmishes and lost or gained mares throughout the year, Golden Boy held fast to his mares since the last gather.  He was wise and cagey...but about the time of our visit, something had happened to him.  One of photographer friends had spotted him with an injury, and it didn't look good.

She took video of the stallion, who was having trouble walking, and showed it to the folks at the BLM, who agreed that our lovely boy here was not only in severe pain, but likely would never recover.  By the time they located him again, he had his mares up against the rimrock, where he could more easily defend them.  Stallions, bachelors without their own mares for the most part, were swarming like sharks.  They knew the old stallion was fading, and they were going in for the kill.  One of those stallions was Blue, a scrappy roan who sparred frequently with other stallions, but never seemed to end up with any mares.  He went into the battle early, wearing down Golden Boy, making it easier for other stallions to strike.  What was amazing to Barbara was how the mares in GB's band were fighting off the unwanted advances of these outside stallions, as well.

Not everything on the mountain is beautiful and peaceful.  We are so thankful that the BLM is willing to end the suffering of a horse in pain, rather than allow them to be torn to shreds until death.  Some folks may disagree...but in my mind, it is hardly debatable.  Had Golden Boy had a junior in command, the battling likely wouldn't have taken place, and who knows if it would have changed the outcome of Golden Boy's fate?  That is one thing we'll never know, but he certainly wouldn't have had to fend off the advances of others in his weakened state.  But that was the way he chose to live, and he fought a valiant fight until the end.

We knew that Golden Boy was missing during our trip, and that he was hurt, but most of what happened we didn't find out about until we returned home the following day.  For us, it was still a warm, sunny, and joyful trip, full of adventure and new babies, such as Zephyr!  Is this blue eyed baby not just the most beautiful thing you've seen? 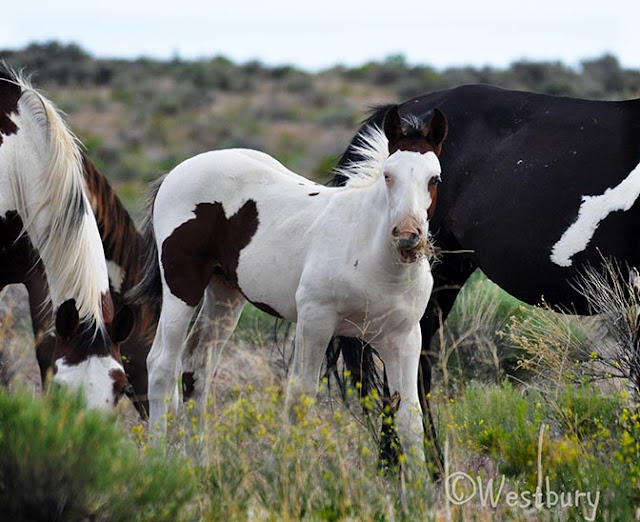 Zephyr is out of a mare named Chinook.

Sunday night put us back in Burns, quite ready to sleep after a long, successful day on the mountain with our wild ones.  Come Monday, we'd be on our way home, but not without a morning hay ride during feeding time at the Wild Horse Corrals. 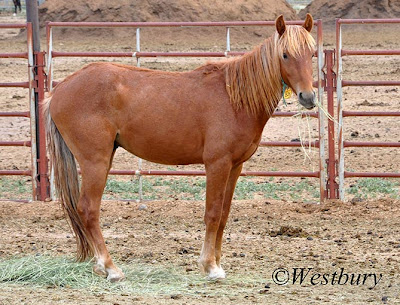 Sorrel two year old gelding could just be what I need.
(Yes, I said need!)

This is when I like to take a look at potential prospects.  (Shhhh...don't let City Boy read this part!)  I'm always, always, always looking for that horse that may just make the perfect mustang cutter, and these two super cute geldings really caught my eye! 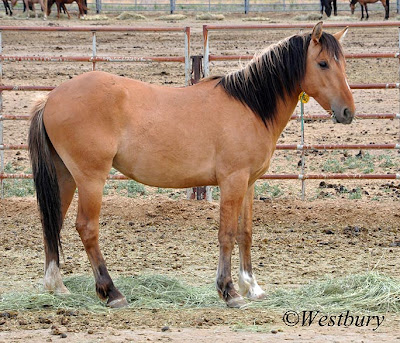 From here, we were back on the road, ready for our 12 hour drive home.  A couple of stops along the way, first to eat ice cream cones in Shaniko, and then a quick tour of the Maryhill Museum.  It was a wonderful trip.  Hope you enjoyed it! 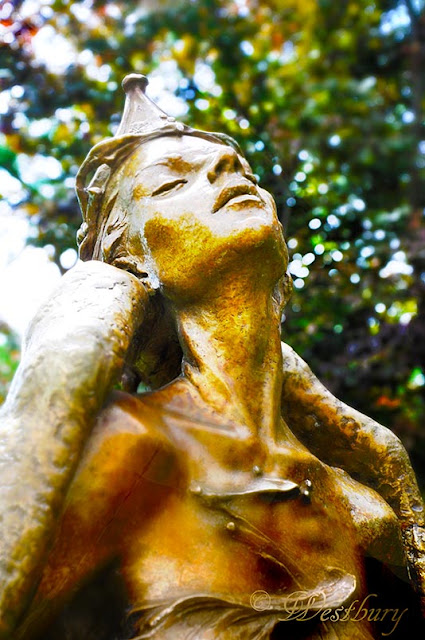 Sculpture at the Maryhill Museum, just above the Columbia River.
Posted by Tracey at 6:58 AM 6 comments: