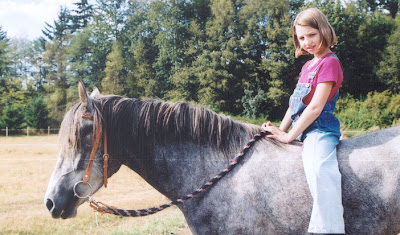 Darling astride Sassy, our first mustang.


A few years back I mentioned to one of my cousins that I'd really like to get a mustang. She and her husband were friends with another couple that occasionally would travel to the eastern side of the state and gather some of the mustangs from one of the reservations. As luck would have it, a couple months later my cousin found me, telling me another friend of hers had a three year old filly that they no longer wanted. She was free; was I interested? Well, you didn't have to poke me with a stick to get me to say yes!


Darling and I went out to take a look. She was small, less than 13 hands, I'd say, but the perfect size for a young girl. She was quiet, but had poor ground manners. The couple who owned her didn't know much about horses, but they'd loved her and she was very good around their two young children. They'd hired someone to come try to train her, but though she'd stand for saddling...well..she also only stood for riding. Still, that is. She planted her feet and refused to move.


I tossed Darling up onto her back and led the filly around the pasture. I went to visit her a second time, bringing a longe line to see how she'd work. She didn't want to work. She was, without a doubt, the laziest horse I'd ever met. Perfect! She may not go far, but she certainly wasn't going to pose any threat to my ten year old.
Darling named her new horse Sassy, and it didn't take long to realize just how appropriate this name was. Sassy was a mouthy horse. She figured if you had something, and she wanted it, all she had to do was take it. Her former family had mentioned that she would bite, and bite she did. That wasn't to be tolerated here, though, and the first time she pinned her ears and reached for me, I slapped the side of her muzzle. She jumped back with shock and looked at me in disbelief. She'd never been told no before...and amazingly she never came after me like that again.


Another slight issue that Sassy had was that when she found herself in the company of other horses, she turned into a rank stallion. Yes...a complete personality transformation, the likes of which I'd never seen and will live happily never seeing again, thank you! She'd squeal, rear and strike out, creating a very dangerous setting for anyone holding the end of her lead rope.
About a week after moving in with us, Sassy discovered there were horses on the other side of the fenceline. She didn't hesitate pushing down the four foot woven wire fence to join them. I might add at this point that Sassy had been kept inside an electric fence; there were just two strands. The high strand was about back level, the low one less than a foot off the ground. And yet, it kept her in. Since there was no shock in the woven wire, she felt there was no need to stay on her side.
I came home from work that afternoon to an upset husband working on the fence and a sister who was holding onto Sassy's lead rope. Seems the neighbor had spent over an hour trying to catch my little horse, had been kicked in the stomach during the process, and was none to happy. I'm not sure why she just didn't come over and ask for help? But she didn't. Anyway, the incident was an insight into Sassy's personality that had been hidden until now.
A couple miles down the road I had a friend with a spare stall in his barn, so we moved Sassy down there. We were certain she'd learn how to be a horse; the other three horses ranged in size from 15.1 to 17 hands. They'd teach her a lesson, or so we thought. But instead of Sassy learning to be a horse, she taught them how to be cows. Even the bully horse was frightened of this little mustang!


This is when we discovered what a nightmare Sassy was to be alongside if another horse passed by. I began carrying a riding crop along with me whenever I led her, smacking her chest and forelegs at the slightest indication that she was about to rear or strike out. I was terribly thankful that she was such a small horse, as if she'd been more than pony sized I'm not certain I'd have had the strength to hang onto her.


Lucky for me, Sassy was smart. She didn't like the sting of the whip and it didn't take long for her to begin minding her manners. Within a weeks time she was leading placidly along side the other horses, just as though she'd been raised that way. The more I worked with that little mare, the more I admired her ability to learn. Others in the barn took note as well of how quickly she seemed to pick things up.

When my husband lost his job a couple years later, I decided that Sassy was an expense we just couldn't afford, so she was sold. But my experience with her left me knowing that if I ever had the opportunity again, I'd want another mustang. 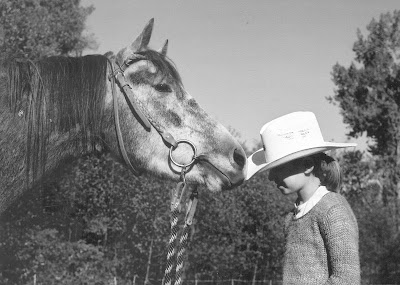