While not much has been posted here these past few days, several things have happened. 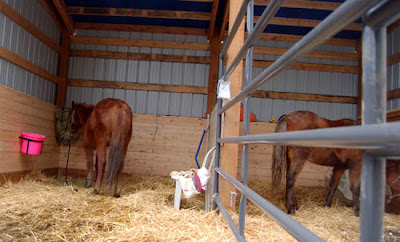 First, City Boy got the divider up between the stalls. The planks can be slipped in and out, allowing us to create one very large stall if there is ever such a cause. The panels are also in place, creating a divider so that Quiet Storm and Sunny don't mingle. They can reach each other, they just can't go squealing about the paddock getting hurt together.

Sunny has made great strides since the lead rope is back in place. It seems sitting with the grain allowed something I hadn't even considered; Sunny is more comfortable seeing me on her right side. Not that she wants me there, mind you, but she's allowing me to step across that invisible center line to where I can see that side of her body.

When I work with Sunny, it's always a challenge to get her to move her front feet. She tends to plant her front feet and pivot from them, moving her back end away from pressure, but not her front. Since she's more comfortable with me on her left side, she tends to work better and move a bit more freely from there. With her new found comfort level with me on her right side, I spent a few minutes yesterday trying to get her to move her forehand to the left. It wasn't easy; she'd back up and try to turn right. I had the lead in my right hand and stretched my left hand out in front of me, but off to the side of Sunny's muzzle. When she tried turning to her right (which was my left, as I was facing her) she'd bump into my hand. Since she doesn't like me touching her muzzle, she avoided that turn and just continued backwards.

We worked like this for three or four minutes, and if you've done tedious work you'll know it seemed an eternity. Every step she took backwards, I followed. She'd toss her head into the air in protest, but aside from backing away from me, she didn't do anything that put either one of us in a dangerous position (such as rearing or striking out at the pressure I was putting on her.)

The moment I saw her give, which is to say, the instant her forequarters made even the slightest move to her right, I stopped the pressure. I dropped my hand and stood still, allowing Sunny to relax for a minute. I usually wait for a sigh that shows the horse has gotten over the stress of what just happened.

Standing on both sides of a horse seems a simple task, doesn't it? And yet, because a horse's eyes are set up one on each side, they tend to perceive things as a threat on one side that they're comfortable with on the other. After fifteen minutes of hard work, I was able to stand alongside Sunny's withers, although four or so feet from her; just out of hands reach. And that, my friends, was a major success! 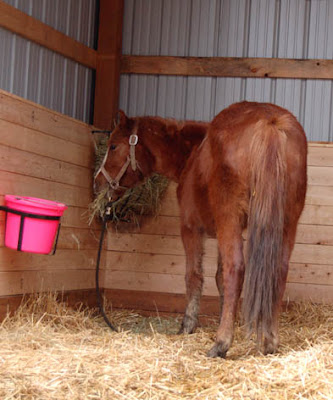 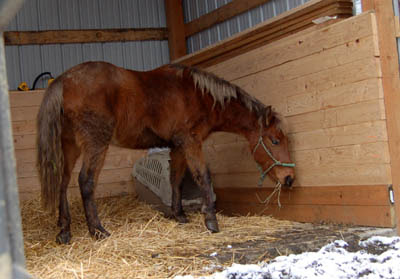 Just a thought, but does Sunny see equally well with both eyes? I mention this, having a mare that is blind in one eye. She prefers me to be on the sighted side. The good news is that she rides and drives well, and I'm sure that Sunny will go well too with all your work, thought and patience.

That thought had gone through my mind as well, but nothing else phases her over there but me. The dog, Quiet Storm, the sheep...she doesn't appear to be bothered by them in the least. It just appears to be my movement that gets her into flight mode.

There doesn't appear to be any cloudiness or white in that eye that I can see, but I'll certainly be looking for it once she feels a bit more comfortable. =)

Always a JoY for me to stop by and see and read about your horses! My friends live in Okatokes Calgary!:)NG