It was hot. It was dry. It was dusty. But am I complaining?

Well...yes, YES I am. And whining, too. I got a sunburn! And Darling looks like she's blistering. Darling never burns. Ever. She's got that skin that transparent people such as myself are ever so envious of. She walks across the yard on a sunny day and somehow ends up tan by the time she reaches the other side. I sit next to the water for 8 hours, turn red as a lobster and two days later have nothing to show for it other than my skin has returned to it's normal summer tone of white...which is a shade darker than transparent for those who are unaware.

But this weekend in Spokane...wowser. Hot, dry, dusty and sun rays that are far more damaging than those on the WET coast.

Despite our lesson in sunshine, we had an enjoyable weekend in Spokane. We took I-90 across Snoqualmie Pass and past John Wayne Trail. Shortly after crossing the Columbia River (which is huge and where a great deal of trading went on in the early days of western settlization...that's the technical term, settlization) we came to wild horse hills. And sure enough, high on a bluff, there they were! 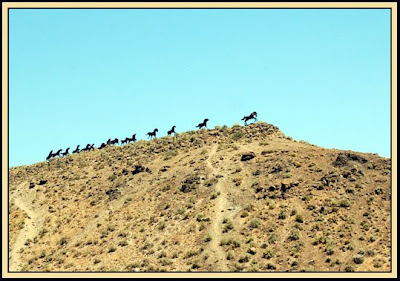 Galloping in wild abandon, this herd of horses appears to be ready to jump off the bluff and thunder past civilization below. Stopping traffic, cars pulled over and people were swept in throngs to the base of the hill in awe and wonder. It doesn't matter how often they see these horses, there's something magical, mysterious about this scene, as though it transports us back to a time long gone when the wild ones outnumbered the cars, and instead of engines you heard hooves thundering across the hills.

Of course, the horses are long gone and all we have left is the iron monument to remind us of the past. The horses are made of iron, crafted by sculptor David Govedare, who pays tribute to the Last Great Roundup which took place here in 1906. 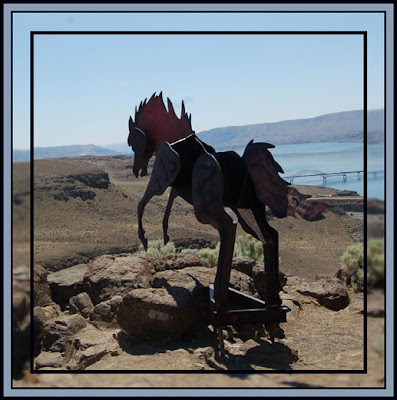 Of course, some fools just can't stay at the bottom of the hill to view the horses. They feel the need to climb the steep hillside with it's loose rock and sand in an effort to get up close and personal with the 1200 pound ponies. Not that I knew of anyone personally to get that stupid in the heat of the day. Darling, put down that camera! Punk. 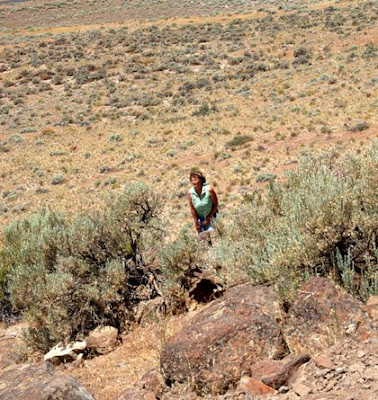 Oh, I'm sorry! Did I manage to get the camera back under my control? Why, yes, yes I did. And what did my little lens spy on the way back down? Darling tells me she's got a good seat as she slides back down the hill! 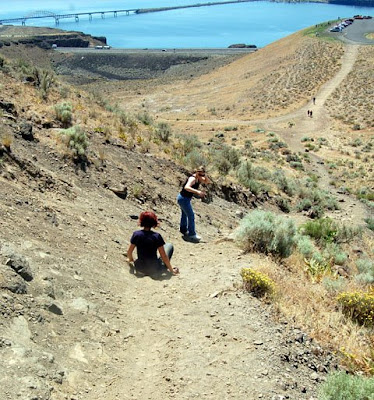 After paying tribute to the wild ponies of yesteryear, we continued our drive into the Spokane Valley. Lea and Bob were gracious hosts and I've got some lovely photos of their place that I'll share a bit later. For now, here are a couple quick shots of the lovely Thumper, a mustang mare who I first spotted at a wild horse adoption four years ago. Back then, as a yearling, she was a dark, steely gray. I was amazed to see how she'd lightened up! 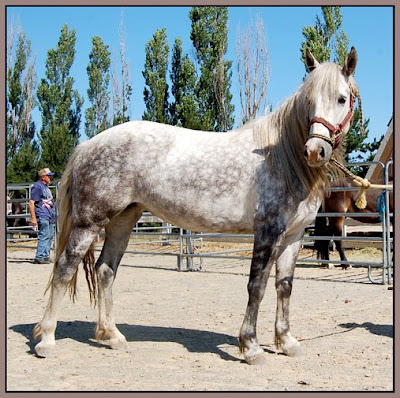 From a distance you'd have thought she was an Andulusion. Close up? Too small, so you'd reclassify her as Paso Fino. But I can guarantee you that folks wouldn't take this mare as a mustang. I must admit that if she'd had a few extra inches in height, I'd have been hard pressed not to try to convince Jim that Thumper needed to come home with me! 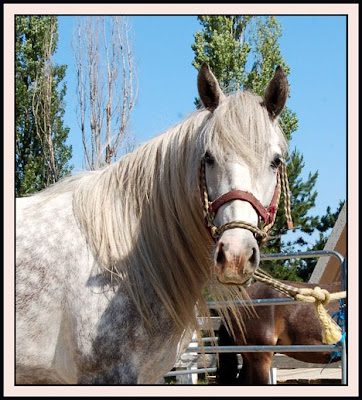 Thumper wasn't the only one who caught our eyes. When Darling and I first pulled up we spotted a tall, lanky red dun tied to the rail. Smiling, I told Darling that there was her horse, and maybe she ought to take More Better for a little walk. It didn't take much coaxing to convince Darling to play the role of horse thief, and even less time for Andrea to realize someone was making off with her boy!

We'd not seen More Better...er, Tonka...since Andrea'd adopted him in 2006. He's filled out quite a bit since his two year old year, and she's done a lovely job training him. He's light and responsive and genuinely enjoys her company. While Darling would have loved to have adopted him three years ago (Andrea outbid us that day), we can't imagine him in a better home. 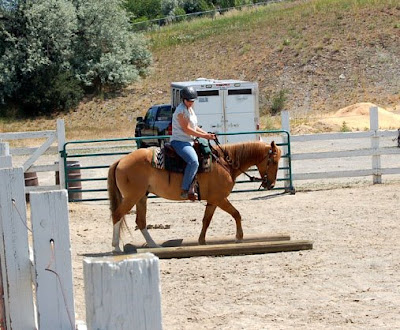 Oh they are beautiful!! I really like that Dunn!!! You were right in my backyard!! I'm over in Coeur d Alene!! Was much nicer over here this weekend. Wonderful post, Sarah

You got a very nice picture of my boy! It was good to see you again. And yes, I agree, it was DUSTY!

Hey...I know all about those wild ponies. Everytime we cross that bridge, my kidlets start pushing and shoving to see who can get a glimpse of them first. And just so you know, we are also some of those crazy people who have to climb up that hill to get a good shot. :)

I think Thumper is about the cutest little horse. You might have taken her home just to use as a lawn ornament.

Thumper is GORGEOUS! Oh my... hard to pass that horse up. I'm in love.. she would so nicely complement my gray gelding.

What a fun trip! I love those wild horses on the ridge, I've seen them when going to concerts at the Gorge (when I was in my 20's!) I think Thumper is beautiful and I agree, looks like a Paso or Andalusian. It was fun to see Tonka! Nice stocky boy Andrea has there!!
Put aloe vera on that sunburn! ;)

I've always loved those horses! It is a beautiful sight to see. Although, I have never climbed up to see them! I love that area. So pretty.
Thumper is one beautiful Mustang!