While the numbers have not been high, the humidity is killing me. I fare poorly when it's damp outside, and it makes it difficult to train, both for me and the horse. Top this off with the fact that I've come down with the creeping crud and you've got one horsewife desperate for feeling better on top of cooler, or at least drier, weather.

Despite the heat and sore throat issues, I plus slowly along with my three new charges. They're all such good minded horses, yet all with distinct personalities. Take Denny, for example. He's two, a bit flighty, and very right sided. He refuses to allow me onto his right side at this point. He flies, scampers and scoots to avoid eye contact. That's okay, it's not like I've not done this before, first with Sunny and more recently with Willow. 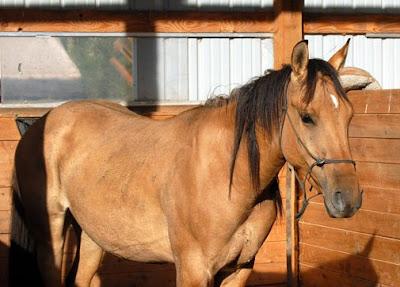 Despite not being able to do much at all from the left, I can work my way into his space from the right. I even hauled my camera out the other morning to get pictures of me scratching his back. I don't know why...it's not like it's all that interesting, but maybe his mom and dad want to see his first scratching session? What really impressed me with Denny recently was how I was able to walk around the back end of him and scratch all over his hips without him feeling the need to defend himself. There is absolutely zero kick in this boy, no matter how uncomfortable he's been in his new surroundings and being hounded and tormented by the lady with the big long rope. 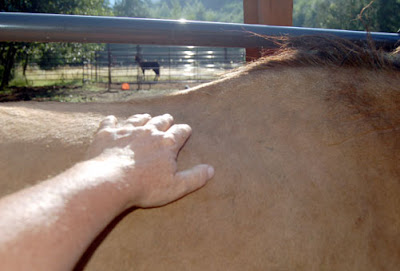 Addie, the big, drafty type mare, is another quiet, good minded girl. Unlike Denny, she doesn't have an overt preference for one side of the other. Yes, she's a bit stronger on her left, but she's allowing me into her bubble on both sides and I've gotten my fingers into that matted, snarly mane of hers to begin untangling the witch knots. She's not happy about it, mind you, but she tolerates me. Where Denny allows me to rub all over his hips (or hip, as it would be), Addie hits the panic button when my hands move anywhere away from the shoulder and neck area.

Well, that's not entirely true...I can work my way up to her ears if I'm on the left side. And I've gotten the lead snapped to her halter in an effort to begin leading lessons. A lesson that Addie has taught me, is that you really can't drag a draft horse. They've got to want to move of their own accord! 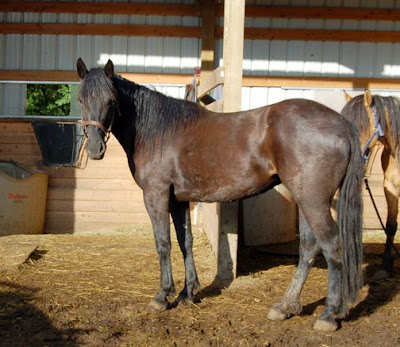 And then there's Dakota. Look! You can see his eye peeking out from behind that sheepdog forelock of his! And what a soft eye it is, too. 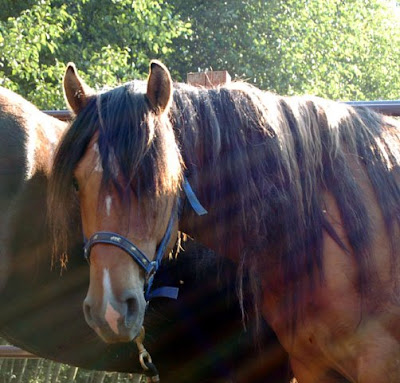 Dakota is a special case. He's leery of people, but curious. In most ways he doesn't appear to be making the headway that the other two are. I've not touched him yet, and in fact he's barely been brave enough to reach out and sniff my fingers but once or twice. He's slow moving, quiet, cautious and reserved. He's always facing me when I'm out with him. I've not used my rope much with this boy, it doesn't seem like the right tool for him. Is there a reason for this decision? I don't know...it just doesn't feel right, and sometimes that's all I can go on, the gut feeling. I don't want to do anything that will create fear or aggression.

Of course, sometimes I wonder if using my pole isn't going to be seen as a threat. He arches his neck and blows, looking at the pole as it approaches, sometimes taking a step backwards, sometimes lifting a mighty hoof into the air to ask me to back off the pressure, and sometimes he just stands there and lets me rub and scratch his neck while standing in front of him.

Like Sandy, this is where Dakota likes his people to be; right in front of him. But last night he softened up just a little bit and allowed me to step off to his left side just a bit more while working the pole up his neck and beneath his mane. Man, what a mane! It's crazy thick and tangled into a couple of serious dreads. Must be mighty itchy under there...or at least that's what I'm hoping as I begin inching my way closer to him.

While Dakota is the most protective of his body, he's also the only one of the three to be watching me with both eyes. He's not afraid, but very polite. Not once have his ears gone back while I've been in with him. He's the only one of the three dragging a lead, and when I pick it up, he's very light at the end of it and will follow me fairly willingly in cirlces, both left and right, as well as straight ahead. Neither of the other two is wanting to lead at this point. They'll follow the pressure when I pull, but they're heavy. Dakota actually leads. 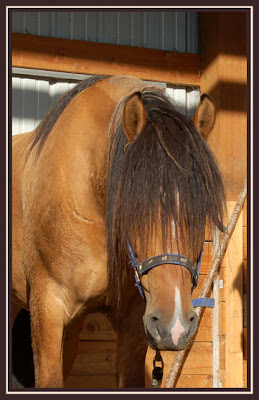 He may be part sheep dog.
I see a few clouds outside. Little, fluffy white clouds. I sure hope this means just a wee bit cooler weather ahead. I simply cannot get out there and work these horses like I ought to when it's so muggy. Makes it more difficult to get well when I'm sweating like that.
Why do they call it sweating like a pig, anyway? Pigs don't sweat...

Oh, never mind my rambling mind and fingers. Back to work I go!
Posted by Tracey at 8:35 AM

They are all so beautiful, but look at Dakota! Now he is breathtaking! That forelock and mane! What a beauty!

Sounds like you are making some good progress! They are all so nice, and Dakota is especially handsome! He reminds me a bit of a Morgan in the face. It finally cooled down a bit here, at least in the mornings, getting that nice cloud cover that eventually burns off. I hope you are feeling better soon, too! And I hear you have a pony for my sis, LOL! :)

We are miserable hot too, and still have August to go....
That Dakota is a dream, what a gorgeous boy.

Hope you're feeling better soon! Looks like you are going to be busy for the rest of the summer.

They are all so different and all so beautiful. I can see how you originally picked Dakota for your TIP horse. He is amazingly beautiful.Have fun, stay safe and GET WELL!!!!

What beautiful horses, Tracey! You are so lucky to be able to work with them. :)

It has benn hella hot down here in my neck of the woods, with the temps topping off in the mid 90's. Maybe I should move up your way and help you out (wink, wink)? The humididty has GOT to go though...like you, I cannot stand it. Nothing like a nice, dry, desert heat, is there?

Sometimes it helps to cut their forelocks. Dakota might really improve if he could see better. If you absolutely can't stand cutting, then at least braid them to stay out of the way.

We finally have a breeze here and thunderstorms in the forecast.

Thanks for the compliments on the horses, everyone.

I didn't pick Dakota, really; they told me they had an older dun and asked if I wanted him, and I said yes. Had no idea what a pretty boy he would be.

Patricia...wouldn't I have to be able to get close enough to a calm horse with scissors for the cutting to happen? :-) I'm not thinking cutting the forelock would go over real well with his momma anyway...I hope not at least!

Hi Tracey, I am thinking that Dakota's forelock is just amazing. We really do not want to cut it. I have a hard time doing a bridle path on these guys, it is just part of their personality to have wild long flowing manes and forelocks. Jodi

Hey Tracey, We love your updates on Addie and Dakota. They look very comfortable with each other and are so amazing to look at. We can't wait to see them again. Thanks again for all your help! Jodi and Julie

Denny, Addie, Dakota...do you have enough to do?!? Dakota sure is a good lookin' gelding. I'm sure he'll come around for you.

Wish you could have been down here at the cutting...but I see you've got your hands full!

LOVE the photos of Dakota! He could be a horse model with that gorgeous forelock:)

Dakota is my dream horse, he's a looker but it's personality I can see in the photos that wins me as well as your description of working with him.

Hope your weather cools soon and you get to feeling better, good luck with the tooth!