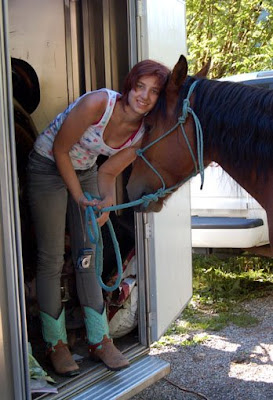 Darling is happy. Sandy? Not so much.

Darling and I have been wanting to try a new trail. A new to us trail that is. Acutally, I've been there once before but I was about Darling's age...mid teens...and I refuse to acknowledge just how many years that's been. Let's just say long enough that I didn't remember how to get there. But we recently purchased a little booklet of horse trails in the county, so off we happily went. 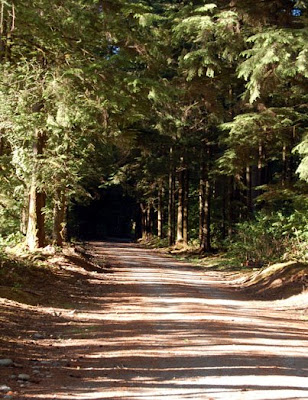 A mouth wateringly tempting trail head awaits.
The trail head began with a wide logging road which disappeared into the tall timbers. After a bit we came to a trail that crossed from one side of the road to the other. Darling shrugged, then darted off to the right where we found ourselves on a well traveled and quite lovely path. Vine maples criss crossed over our heads, moss hanging down and sunlight streaming between leaves creating dappled shadows on the ground.
Why Darling and Sandy cannot let me just enjoy a simple ride is beyond me; it didn't take long for that little helmeted punk to find downed trees across the trail, sending Sandy forward at brisk trots and slow canters in an effort to fly. While the flying trapeze act zipped out of sight, Steve Holt! insisted there was nothing to be concerned about and continued his meandering like a well broke trail horse. Why on earth a horse who was wild and untouched just 7 months ago and who took a two month vacation in the middle of his training would pack me along with little concern boggles my mind, but I do believe Darling and Sandy were happy for it as it allowed them the freedom they desired to make foolish decisions; that of being airborne on the trail.

Naturally, nothing horrific happened to either of them. Good think I had Steve Holt! to take care of me and keep me company out there. 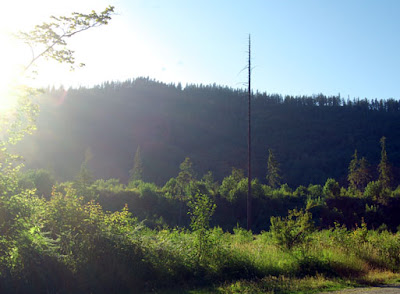 Canada, Canada, where for art thou, Canada?

We'd been on the trails for nearly two hours when we came across a man leading his pack horse while riding his mule. We stopped and chatted a bit, and he told us to be careful of the trails to the north as some led into Canada. I told him no problem, we're riding mustangs. You know, the Border Patrol rides mustangs. They'd probably mistake us for Dudley Dooright...oh, wait, he's a mountie, isn't he? He didn't ride a mustang. (Hmmm...maybe I need to enable some mounties?) 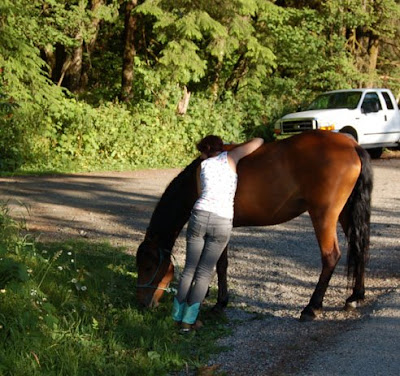 Three hours later and untold miles of unexplored trail later, Darling, Sandy, Steve Holt! and I were back at the trailer. The boys were given a bit of time to nibble the green grass before loading up and heading back home. This was a beautiful evening ride and Darling and I are anxiously awaiting our next trip into the foothills below Canada.
Posted by Tracey at 9:53 PM

These are lovely pictures! It sounds like your escape was WONDERFUL and well deserved :)
Oh, I agree with you...trail rides are best enjoyed from terra firma...not by flying...hehehe

I'd like to get you to come up here to trail ride; Janice (Own a Morgan blog) knows some fantastic trails, and we want to invite our blogger buddies to come up here and enjoy some Canadian hospitality and breathtaking scenery.

Shirley, I'd LOVE to do that. How far across the border are you? We're just below Abbottsford.

Wow! What a beautiful area to ride! We have some great areas around here, but there is just something about the mountains and sky reaching pines.
I am not near as brave as I used to be, but I have to admit that I would have loved to try and keep up with Darling and Sandy. :-)

Wow, Tracey and Darling, you two are some adventurous gals! What beautiful pictures of the trails you rode on, breathtaking!!! Your horses are beautiful, lucky you having mustangs!
Where will you ride next?
~Jane and Gilly~

Beautiful scenery and it sounds like a great ride! I've got one of those daredevils too. She wants to go, go, go.