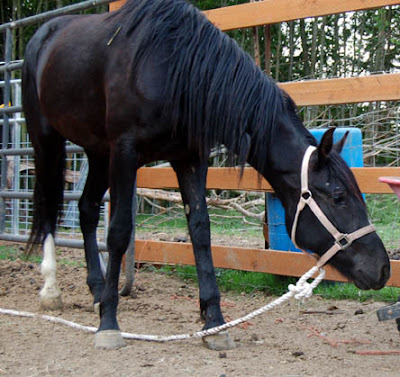 Jet, the day she came home.
I'm not an expert in this area...are you? I've not had a horse with them before.

While we were at the adoption in June, one of the fillies that really caught my eye also had some scaring on her pastern. It was open and bleeding a bit, and I wasn't sure if it was a fresh wound or an older one that had been banged up a bit on the trip from Burns to Monroe. That, combined with the fact that Darling really preferred Jet, caused me not to bring her home. 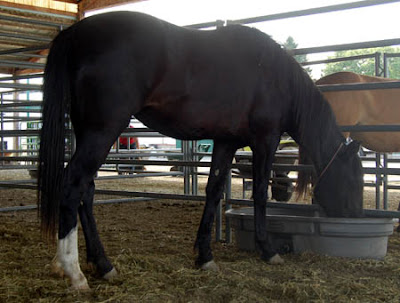 At the adoption; do you see the splint and scar tissue?
I tend to go over the horses with a fine tooth comb, even if they aren't on my potential adoptee list, when they're in the adoption pens. Which is why I was blown away to find a splint on Jet's left foreleg when we got her home. Not only that, but she appeared to have some swelling in the pastern. At first I thought perhaps she'd banged herself up in the trailer ride home, but Darling said she'd seen it while in Monroe. Way to go, Darling...pick your favorite horse and don't tell Mom you see a potential problem! But in all fairness, Darling had no clue what a shin splint was.
Not only had I not seen the splint, I didn't notice what appeared to be swelling on the pastern. Jet's left foreleg was all scuffed up, so I hoped the the swelling was just temporary. But after a couple of days I was up close and personal enough to realize there was scar tissue.

A close up of Jet's foreleg...same pic as above.

So, here's the deal: I'd been toying with the idea of doing some reining with Jet. I've never done it before, but it's always seemed like so much fun. But the splint may get in the way of that, right? I've been reading up on them and it would seem they're more cosmetic than harmful as time goes on, but that hard work may be worrisome. So...reining at the higher levels most definitely would be thrown into the hard work category, don't you think? And the scar tissue on her pastern...who knows how that's going to effect her as time passes. No clue if Jet has the talent...or me the money, for that matter...to do anything more than a few fun, lower level classes, but should I even go there if this is something that is going to put too much stress on her foreleg?

"Scars tell a story", says Darling. I wonder what Jet's story is? How did she end up with these scars at such a tender age? And how will they effect her as she matures? Perhaps those trail challenges and extreme cowboy races will be more suitable to her than reining?
Posted by Tracey at 9:44 PM

Alot of shin splints are just cosmetic. With proper support, there really should be no reason not to do some reining with her. Use a good pair of splint boots and it 'should' prevent more from happening. As long as the 'current' splint is healed up, not a big deal. IF it were a 'fresh' one, that would be different.

Nahima has a scar all the way across her heel, it's rather deep, but it doesn't affect her movement at all. It's not just surface but she can flex and move just fine.

I bet in the end that Jet does just fine with whatever you want her to do.

Splints that are the cosmetic type are not a problem. And on a young horse can go away over time.

From my understanding it's the ones that involve an actual tearing of the ligament (I think) between the splint bone and the cannon that cause lameness issues. I believe if she had that type of splint you would know it already.

I wouldn't rule the reining thing out yet.

Well, this is definitely good news; thank you, ladies! I'd thought it was cosmetic from what I'd read, but I sure don't want to be stressing it with work that may be too demanding later on.

Hey Tracey, don't feel too bad about not seeing scars. Tonka has a huge one on his bum that I didn't see until I got him home. I think it may affect his mobility a bit, but luckily I wasn't looking for a performance horse.