Riding for a Fall 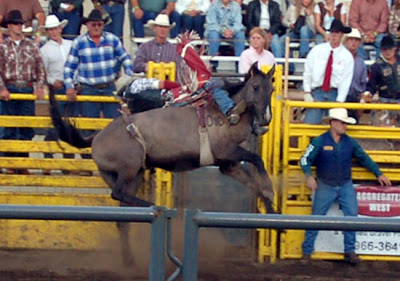 Darling and I went to the rodeo last night. It was outdoors, so no good bull riding pics. The bulls always go last, you see, as they tend to be the most exciting. We find the whole thing quite a bit of fun, to be honest.

I know that rodeo gets a bad name among some. But then, some folks think it's cruel to teach a dog to walk on a leash. My take on rodeo is that it's preserving certain skills that are still necessary out on the ranch, such as calf roping and steer wrestling. Bull riding, of course, is sheer entertainment, but undoubtedly something the cowboys need to do just to keep their spirits up while out in the middle of no where with little else to entertain them.
If you take a good look at the horses in both bareback and saddle bronc riding, you'll see they're in pretty tip top condition. Better than most horses that are kept in folks' backyards across the country. And eight seconds isn't a terribly long time to work for that care, truth be told. More often than not, when that eight second bell sounds, those horses slow down with the bucking. The cowboy hears the bell and stops working so hard to get the buck, and the horse knows it. It's kind of like clicker training. Funny, if you think about it, isn't it?

Rodeo, to my way of thinking, isn't any harder on the animals than any other sport involving horses. Most of them wouldn't go out and jump Olympic courses or trot around arenas on their own. Show horses have to put up with a lot more abuse than most bucking stock.

While we were watching the bucking, I leaned over to Darling and told her I thought that there were a couple of mustangs out there. She stiffened. Had I seen the brand, she wondered? Not BLM horses, I said, but reservation mustangs. She relaxed. It's illegal to use BLM mustangs for bucking horses, and she knew it. But there was a definite look to a few of those being used that couldn't be denied... 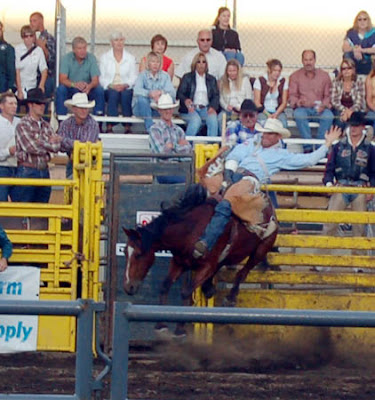 Vote for me at http://www.blogforayear.com/profiles/desperate-horsewife
Posted by Tracey at 9:14 AM

I've only been to the rodeo a couple of times in my life but I really enjoyed it.

The cowboy that I respect so much as a horseman works a lot with roping horses the compete. According to Harvey the horses of rodeo are no more or less abused than any other horse. It all comes down to the people who take care of them.

I used to enjoy rodeos. I had a horrible experience last year in Tillamook. A bronc broke its neck while bucking around the arena after stepping on his rope. It was truly awful. We all heard the crack and then he went down and started convulsing. They came out and pulled him onto a wooden slat and dragged him out of the arena, his tongue hanging out. The whole time the announcer kept saying, "This horse will get the best care back with our vets." It was obvious the horse was dead. Really sad they had to be dishonest about the whole thing. I was just horrified and I don't think I could go watch one again in good conscience.

Rodeo is much harder on the cowboys than on the animals.