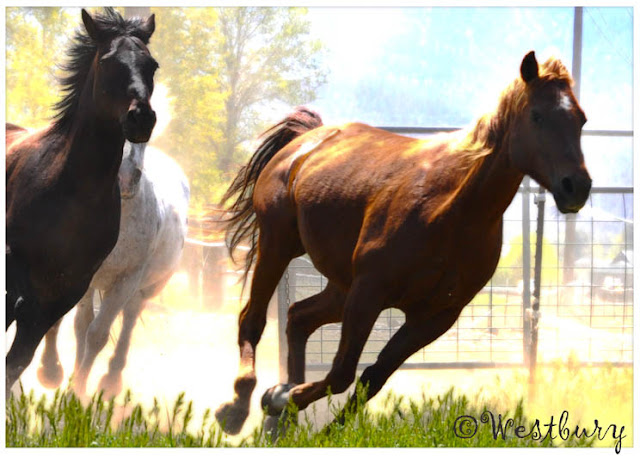 So to catch you up to speed...and to get myself back on track, here's what's happened this past month while I've been seemingly invisible.

First, I spotted Ranch Girl's comment on facebook about giving up her beloved roan mare, and I couldn't resist teasing her a bit and letting her know she could replace it with a mustang.  Of course, if you know Ranch Girl, you know that her sister, Paint Girl, has already adopted a mustang (Chance), so it would be only natural to add another to the family, right?  Right!

It really took no convincing at all to get the sisters up to my part of the state to visit with none other than little miss Bad Reputation.  It was, of course, love at first sight.  How could it be anything but? 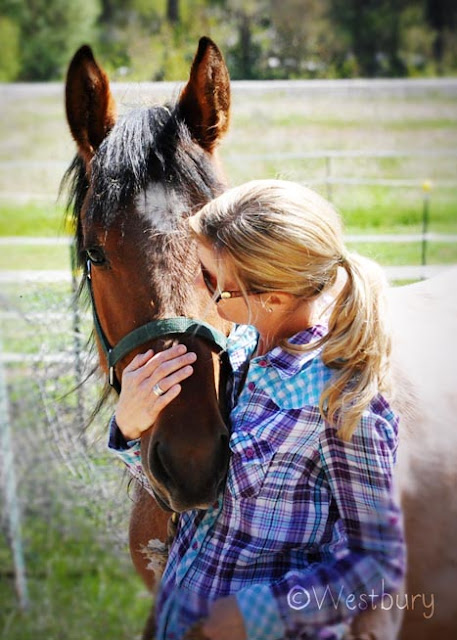 A week later, Darling and I were in the truck, hauling our pretty little girl to her new home, where a happy Ranch Girl awaited. 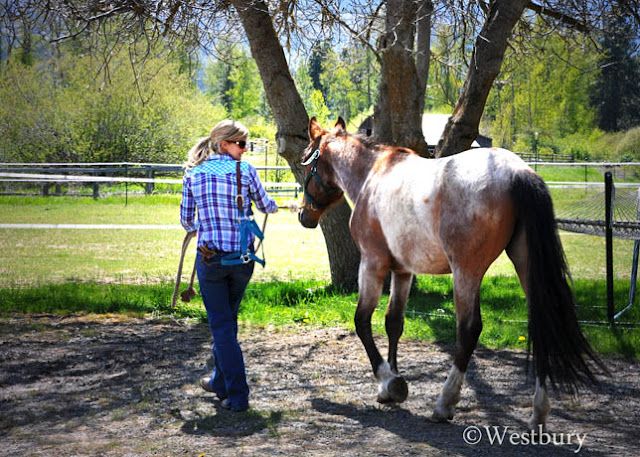 While we were there, Ranch let the ranch horses out to pasture, giving Darling and I an opportunity to photograph some very excited equine on their way from dry lot to green grass.  I must admit, I was just a little jealous of the picturesque setting on that there ranch! 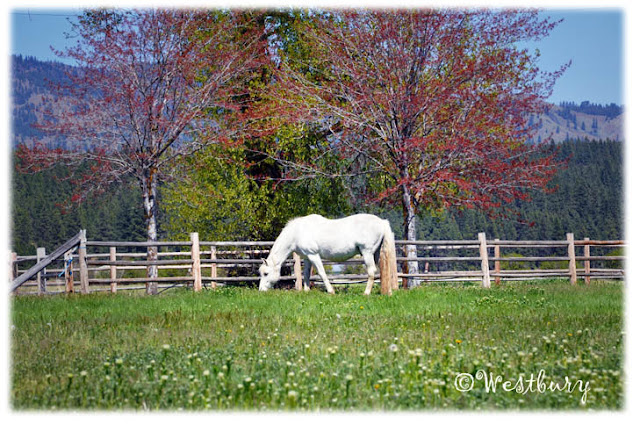 Of course, the ponies at home let me know that there are plenty of opportunities to photograph them in the summer sun as well, if only I would take the time.  Twas a brisk, early morning a few days later when I heard the thunder of hooves and saw the mare herd acting all rambunctious like.  I snatched up the camera, hoping the action didn't come to a screeching halt before I snapped a few.  No need to worry...they were on a roll! 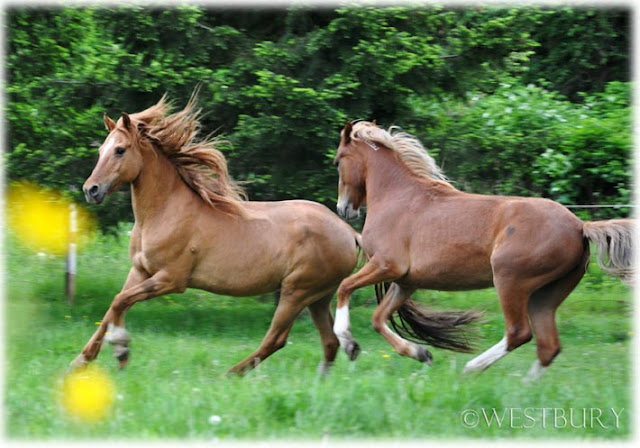 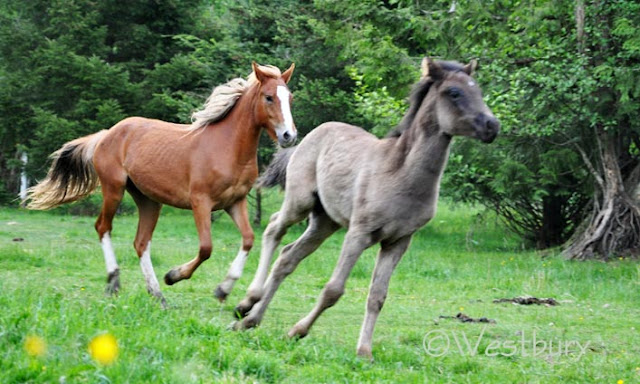 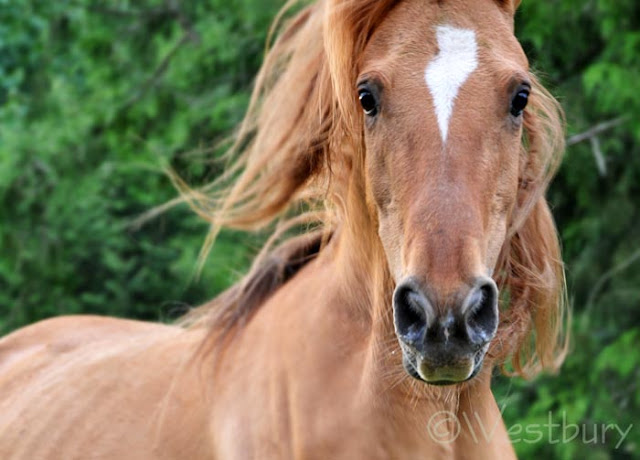 Okay, Tika...I agree!  Nothing in Ranch Girl's pasture compares to you.  Silly me, what was I thinking?  But it was fun to visit with her just the same.

After frolicking and cavorting most of the morning, the youngsters decided it was time to relax. 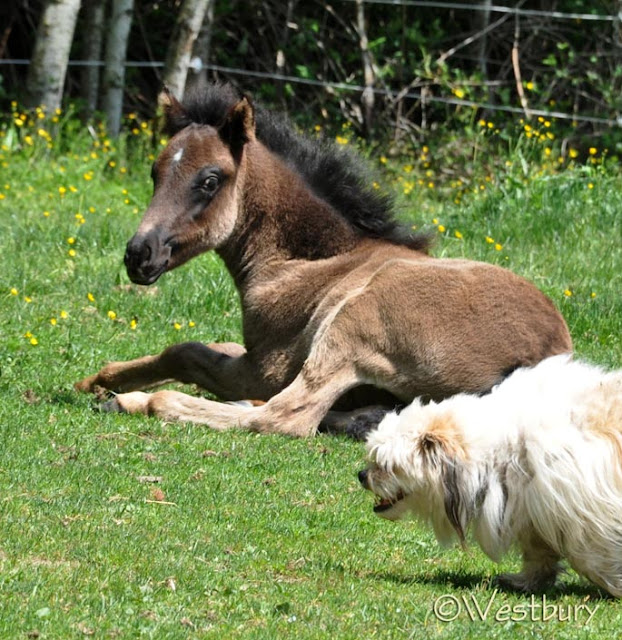 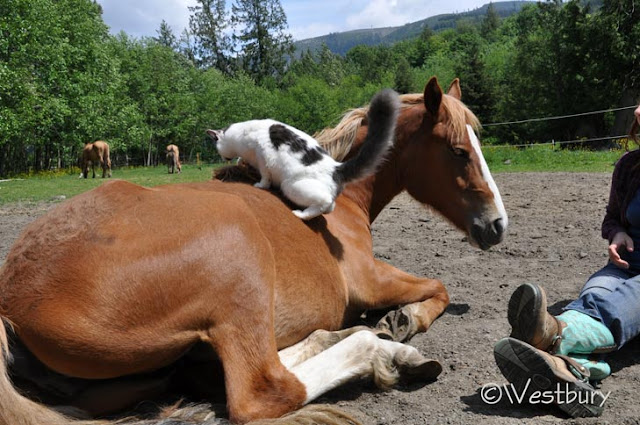 I was intending to take photos of Darling and Max...but someone named Spot stole the show! 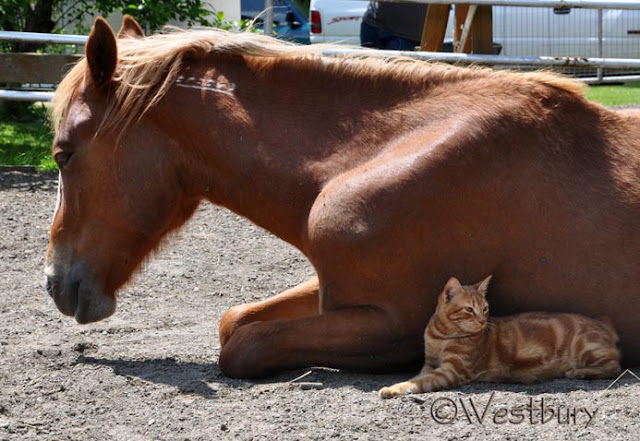 Copy Cat?  Can't let Spot get the better of him, I suppose.  Creamsicle finds a shady spot to hide in.  Silly Maxine could care less.

Try as we might, we could not convince Max it was time to wake up from her nap and go to school.  Yawn...sleepy redheads! 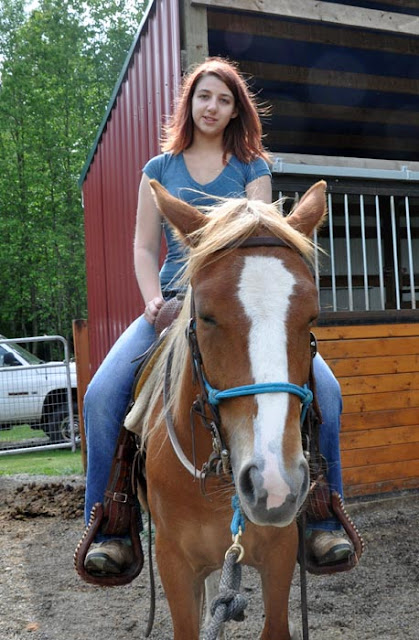 Maxine had her first ride, short and sweet.  I'd climbed up onto her back a couple of times, but waited for Darling to do the actual first ride (nice of me, huh?  Put my kid on the horse in case it bucks?  What are mothers for?)  It was rather uneventful, which is how we like them.  It has rained since then, so until we get some more free time and sunshine (on the same day), Max is once again on 'rain' vacation. 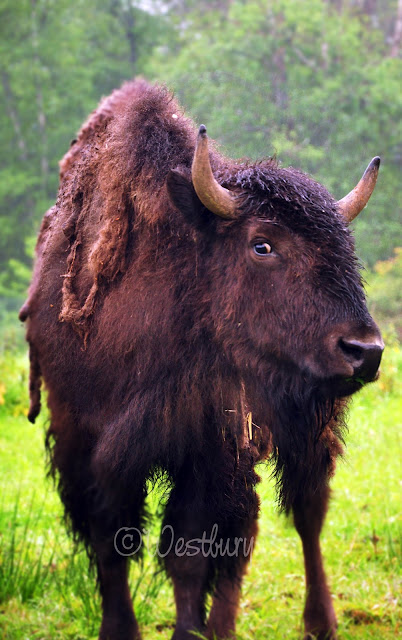 What?  You gonna try to ride me next?

**Ahem indeed!** Bout time! Lovely series of photos, and how great is it that Rep- Luna- went to a blogger home! Great news!
I take it Max is a keeper? Your husbands horse? She sure looks like she will be a nice one.

Oh yes- I'm not forgetting the lovely Tika- I think that "look at me" photo is one of the best ones you've taken of her.

Exquisite! You have some amazing cats as well!

Haha! Looks like everybody ended up happy in the end! Very cool!

My sister just adores Luna!! She has totally fallen in love and I think she is super happy you "convinced" her she really needed a mustang!! I think it's awesome that we now both have mustangs and I can't wait for when we can blaze some trails on our girls!
Love Spot on the horse, pretty darn cool.

Was so happy to stumble on your blog! If you use a blog reader yourself check out mine at

I'm so happy to be in the mustang community!

Sorry I've been so behind on my blog commenting! ;-) Thanks for posting about me and Rep, "Luna"~ she looks like such a baby in those photos but has really become such a "big girl" the past few months! I am so enjoying getting to know her and working with her. I think next summer will be our bigger summer as far as riding goes, but we are still getting a lot accomplished this summer!

I love your blog and the way you write it you have such an easy way of riding that keeps your readers intrested.!

I love your blog and the way you write it you have such an easy way of riding that keeps your readers intrested.!