It was a day like any other day, in the beginning. A bit warm for December, but wet and windy. I climbed out of bed a bit later than usual and headed outside in the dark to toss hay to the three horses here at home. I then climbed into my truck and headed south to see Tika.

Curt's been a little slow the past few days to get out into his barn, and I've found myself pulling up to an arena who's door is still closed. This morning, however, the door was open and I found him in the barn, along with his border collie pup, Patch, tossing hay into stalls. I picked up the hose and finished up the watering for him, and we went inside to have our coffee (him) and hot chocolate (me) while waiting for the horses to finish up.

We talked about how we'd spent Christmas. Curt's wife had purchased him a sport coat and trousers, a dress shirt and sweater. Evidently she wants him to meet some of her friends from her high school days, "and she doesn't want me looking like a cowboy, I guess", he said with a wink. I wonder if he'll still wear his cowboy hat?

After finishing up our drinks, I told him I was going to get my mare out. "Work her in the arena a bit; that sand will wear her down a bit." Sure thing, boss! And so I saddled her up and rather heading to the round pen, we went into the arena where the footing is nice and deep and indeed will wear a horse down a bit quicker. 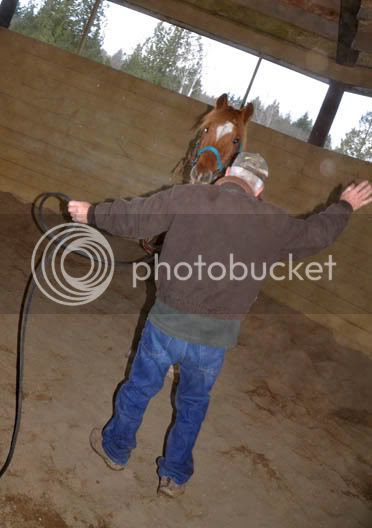 It wasn't long before Tika was feeling a bit warm on her chest, but there was no heavy breathing, and she was working quietly at a long trot when Curt came walking in. "Where's your helmet?" he inquired.

My eyes about popped out of my head. "You don't mean to put me on her in the arena!"

"No, just go get it." And I did. And from there we walked to the round pen, where Curt worked Tika in a few circles, getting her to move out fast, stop, turn, move fast again. All the while she was watching him, eyes wide, that half startled look on her face. But she listened. My girl listened. And then he picked up the stirrup and slapped the fender against her her side with force enough to make a loud clapping noise, but she barely moved, just looked at him, head held high, out of the corner of her eye.

He rubbed her neck, speaking quietly. Asked her to step forward with him a few steps, stopped, stroked her face. She dropped her head, letting out a sigh.

My foot slipped into the stirrup and I bounced up, leaning over the saddle, rubbing her neck. I stepped back to the ground, picked up some mane in my left hand and bounced back up above her. This time my leg went over and I sat down in the saddle.

"Got your foot in the stirrup?" I nodded, and Curt began moving his feet, back and forth, side to side, in an attempt to get Tika to take those first few steps with him. My weight acted like an anchor. She wanted to follow him, but I was on top...so what should she do?

Curt stepped to the side, positioning himself like you would when lunging a horse. Tika, though, faced up. "Pull her nose away from me a bit," he said. I did, and she followed it enough for him to step back to her hip...

Tika went to the rail, unsure at first, trotting a few steps, hesitating until Curt asked her to move forward, and off she went again. One time she even broke into a fast lope, which only lasted two strides but was enough to throw me over the horn of the saddle when she slammed to a stop. She watched and listened to Curt as he moved her forward, slowed her down, moved her again. "Keep your legs relaxed, don't tell her what to do, let me do the work until she figures it out," he said, all the while keeping his eyes on my redheaded girl.

It was only a few minutes. But to me? Today, I rode the wind. 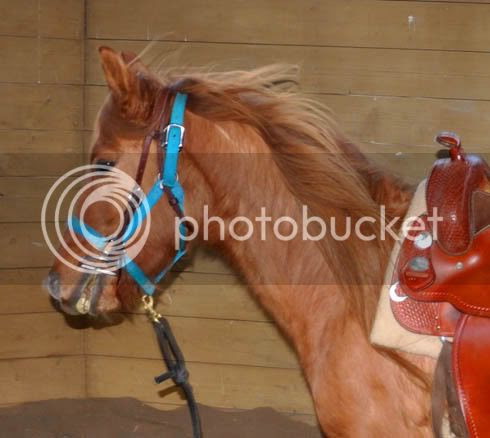 I agree! That sounds like the best Day After EV~Ah!

What a wonderful first ride. I'm grinning for you!

That's an extended Christmas present and you're going to have a Happy New year .

Awww, that IS a great day. First rides are always the best (when they go well, lol) Congratulations!!

How wonderful that you got to ride Tika!! That must have been an amazing feeling!

Congratulations! What an exciting milestone! I know just how you feel - walking on air.

TRacey!! You are totally giving me goosebumps and have me tearing up with happies for you!!! So most totally excellent!! And exciting!! GO TIKA!!!


And if you can, we need to see pix of Curt in his new duds- hopefully with his cowboy hat on too ;)

Yeehaw!!! What a wonderfaul Christmas gift!

Ride number two is now in the past! Lots of trotting and loping today, and working both directions. Peel me out of the heavens, please!

That's great Tracey. I'm s Tika fan and I really think she's going to be a great one. Now that my computer is working again, I can catch up on your progress with her!