Trouble with a capital T

With a capital T that rhymes with me,
that stands for Molalla!

Okay, so here's what happened this past weekend. Or before, really, as that's where the trouble began.

I was ready to drive down to the adoption when City Boy informs me that my truck isn't fit to drive that far. Maybe, maybe not, but why risk it? He's been waiting for a part and it's been on backorder. He'd forgotten this was the weekend I was going to be gone, and me...well, I'm the world's worst communicator and hadn't said anything of late about going. So when I thought I'd be pulling out on Thursday, it ended up on Wednesday I was calling the BLM in Oregon in a panic over what I was going to do without horses for my gentling demos at next months fair.

I love my BLM! I'm going to print up a bumper sticker saying that, because the head of the wild horse program there told me he'd haul the horses for me. That's right...from the southeast corner of Oregon to the northwest corner of Washington. Who says those folks aren't caring about the wild horses? I love my BLM! Still, they said, they were very short handed and could use all the help they could get, so was there any chance I could drive down in another vehicle?

City Boy, with what I decided must have been a sigh of resignation, said I could take his car. And so Darling and I were off on Friday morning, making our way to the town with the funny name that's fun to say. Molalla!


Tom, the manager from the corrals, has hand picked a pretty bay gelding that he thinks I may like. A nice moving horse and a little bit curious. He's got silver streaks in his mane and tail which make him a rabicano. Yes, another funny word but much less fun to say than Molalla! I had to agree; Tom has good taste in horses. He pointed out a couple others that he liked and Darling and I pulled out our shopping list and began to make a short list of horses we liked. 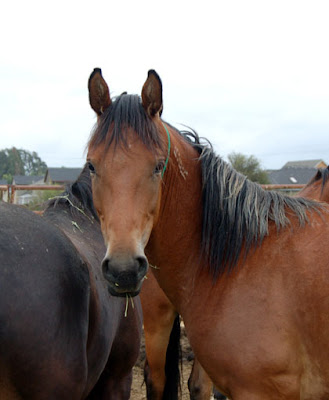 Tom handpicked this lovely bay rabicano for me.
The plan was to wait until after everyone had an opportunity to take the horses they liked at Saturday's adoption, then we'd select from our short list of 4 horses. There were several that we liked; this year's 'crop' was good. Lots of big behinds and sloping shoulders, things this quarter horse person is drawn towards. 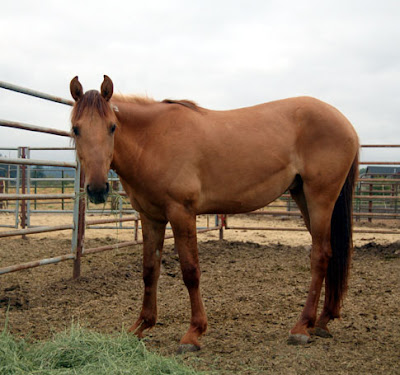 Red dun gelding has lovely blond streaks in his mane (why is it on the other side?)
One of the geldings on the list was a 2 year old red dun. It's always difficult to judge just how tall the horses are when they're in the pens on uneven ground, but our assumption was that these boys were all 15 hands and up, and the dun looked like he was roughly 15.1 with a back end just a wee bit higher. I anticipate he'll end up over 16 hands when he's fully mature.

There was a short, stocky bay who reminded me of Dude. Another bay had a very sleek body. There was a splashy looking sorrel who had a sabino pattern and looked a little bit drafty. So many horses...so little room! This was not going to be easy.

But that's not all.

I'd received a panicked email from Stephanie, Quiet Storm's owner, just a couple days before we left. She was in a difficult spot and they'd decided that they needed to place all three of their horses in new homes. She was really struggling with this decision, and I couldn't help it...I had to help. I told her Quiet Storm could come home with us.

But wait! Now I didn't have my truck and trailer. So I called the BLM again and they said..."No Problemo!" (City Boy does not love my BLM...and he's not very happy with me, either, as I managed to leave out that little detail...)

While there, we met with Jenifer and her husband. They live in southwest WA and we'd met online. She'd wanted a mustang, and in fact had considered Cricket. Jennifer fell for a very nice tank of a horse, a 3 year old with some Appaloosa traits. I knew there was no way I could bring home four horses, so we decided that Jennifer's boy, Quiet Storm and the bay would be who came home with us. 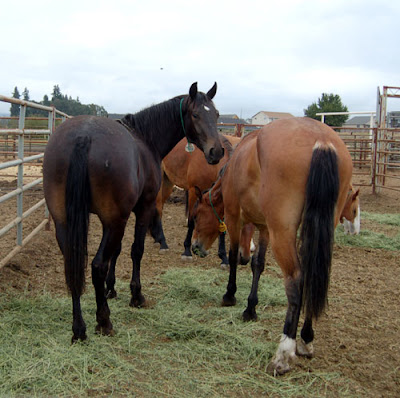 Jennifer has named her boy Simply Magic
Darling was beside herself with joy at the thought of her best friend coming home. I told her we needed to find her a new home, that we couldn't keep her, but I'm not sure she understood just how soon that would be. While there we spoke with a woman who thought Quiet Storm was just the cutest thing. She was looking for a pony for her son. There was a farrier there giving demos; he knew the sister of this woman and vouched for their love and good care of horses. It seemed like a great fit. Darling cried and resisted. The woman told us she was running to town and we could think about it.

It was so difficult. Darling was sobbing. Pleading. Calling her dad (who'd forgotten his phone at home) to beg him to let her bring her baby home. But in the end she managed to pull herself together and we called the woman and told her she could buy Quiet Storm. The woman was thrilled, but Darling went to the car with red swollen eyes and refused to speak to me. 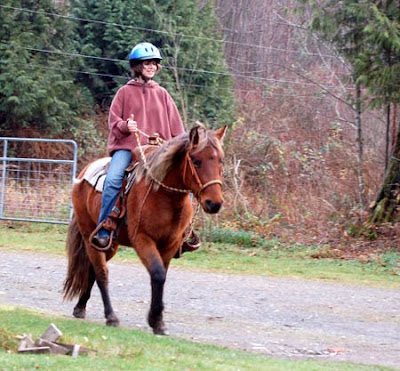 Happier times from last fall
With Quiet Storm having a new home, I decided to go ahead and grab a third horse. Not the plan, surely not the space, but since one was already spoken for I figured I may as well grab the other and see if I could get it adopted out as well. The adoption was over, the paperwork was in hand and the three horses were on their way through the loading chute when my cell phone rang...

"Hi...I hate to do this, but I've decided this was an impulse buy. I really can't take your horse. I really need to be able to have my son ride before I buy...I'm so sorry...please tell your daughter I'm so sorry for putting her through this..."

And there I sat, three wild horses in a trailer and Quiet Storm in hand. And a smiling Darling. And a heart filled with dread because, well, let's face it; I was pushing the envelope with three horses, and City Boy was not going to be happy about all this...and I can't say that I blame him.
Posted by Tracey at 9:16 PM

OMG! Stephen would kill me! I couldn't push the envelope with one well trained domestic 1 for free, much less 3 wild and 1 more! Oh good luck with this one! LOL

Tracey if I had a dollar for everytime my hubby told me not to bring home anything else that eats...

When oldest was 3 (the same one who decided the easter bunny was bringing him a wilbur pig because he already had a bunny, chickies and duckies) saw some puppies in jail, I thought it was unfair I had to be the mean mom (especially when they were adorable liver colored german shorthair pups)

So WE called Daddy at work and I passed off the phone to let 3 y/o John IV tell daddy all about those poor puppies being in jail. When the phone got passed back someone was mad at me, but someone else was ever so happy to be going back to get a puppy out of jail.

John is now turning 24 and he had that dog most of his life. He named her Arrow after the dog in The Point (one of his favorite videos) Shes the dog that tried to get us to leave our house at 2 am right before an earthquake hit. The house was OK as were we but I felt bad for calling her a silly dog for dancing around on the porch instead of doing her thing and coming back in.

The earthquake hit just as I made it back to my bed after giving up on her, and shutting her outside.

If Darling HAS to give up Quiet Storm again, let her help choose the next home. Child is really good at placing puppys and kittens she finds but can not keep.

Yes, well...dead I nearly was. I think he only stopped because orange is not his color. Begging forgiveness has not been easy this time, but the upshot is I've got paperwork filled out on two of the three wild ones.

Kathy, she helped pick out the last home and felt very good about it. I think it was just the fact that there was no warning. She didn't know Storm would be there, let alone that we'd (almost) find a new home before leaving.

If you need someplace to GO for a while head southeast! ;) We will take you in...lol

All kidding aside- Thank Heavens you are you. For Real. All that you do for the Mustangs is amazing. You are an inspiration!!

Tracey -I'd be dead----------well not really but he would be mad. OOps. You will make out just fine though. If you need a place to hide out we have room.
Lea

But they're going to find new homes so he can't stay mad for long right?!

Oh Tracey, the part about your daughter and Quiet Storm broke my heart. I wish she could keep her.

Goodness, talk about emotional upheavals! Such gorgeous horses & all the excitement about choosing - & then the drama with Quiet Storm! I thought it was Darling who had decided that QS was too small for her & she needed someone bigger [who I thought was Jet who you're riding & now I'm getting very confuddled ... ]. Still I guess it was the surprise & heart-wrench at seeing QS again & wanting the best for her - argh! What a situation! Anyways, I hope when it comes to finding QS her home D. will be more rational about it [um what am I saying? Teenage girls, rational?] & get behind the project of finding the best home for her. Too much melodrama in one day, I think ...

So, names for the new guys? I ADORE the rabicano, the silvering is gorgeous, is it in his tail & on tummy too? I think he needs a Diamond-type name - Diamond Storm? Red Diamond?

All the best! Glad City Boy still loves you - WE all know he does but that breakfast just proves it!