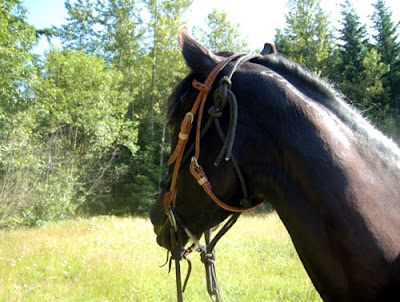 Darling rode Jet last night down around the tree farm while I led Sandy alongside. I'm in need of another snaffle bit so that we can both ride together, or so City Boy and I can go for a ride once Sandy's ready. But for now, Darling rides while I walk, and that's okay because I could use the exercise.

Jet behaved herself for Darling, although at one point she jumped into a trot without being asked, and while Darling broke out with a big grin, mean old mom told her to walk. No point in the big black horse making decisions such as when to take off on her own while carrying someone who wouldn't know how to get out of a jam should something happen.

The rest of the walk was uneventful. We chatted and moseyed and the horses did great out in the evening sun. As we headed around the last bend, Jet picked up the pace but as she was behind us she really couldn't do more than stretch out her long legs into a nice trail horse walk. Darling commented on how she'd picked up speed and wondered why, and I told her the ground was a bit softer along this stretch. Both Sandy and Jet are barefoot, but Jet's slightly more sensitive to the feel of rocks beneath her feet. Even so, they both do wonderfully and aside from a wee bit of chipping on her first ride out, neither horse has had issues.

I glanced back at Darling and noticed her reins were ever so long and asked her how she thought she'd stop her horse should she suddenly spook or jump forward? Immediately the reins were shortened, and a few minutes later Darling was dismounting at the trailer and both horses loaded up and hauled home.

It was last nights ride that was on my mind as I was sitting atop my filly this morning. We'd headed up a new trail, one that had an iron bridge that crossed the creek. I'd dismounted and led Jet across while she listened to the strange echo of her hooves each time they landed on the metal beneath her. She wasn't too sure about what I'd asked her to do and stuck pretty close to my side as though I'd be able to catch her in my arms should she jump into them. She'd have been sadly disappointed to know there's really not much I can do to protect her massive size.

Back in the saddle and after quite a steep climb, my reins were loose and noodle like, dangling down and swinging with each step Jet took. And at the precise moment the memory of Darling's loose reins crossed my mind, Jet's head shot straight up into the air and a deer dashed out across the trail in front of us. Jet wasn't going to stick around to see what that flash had been. In her mind, it was a cougar or bear or some other horrible creature about to devour her whole, and she spun so quick and fast that one could say she spun on a dime and left you some change.

Thankfully she spun to the right, which meant that as my body was flung to the left, my right hand was able to reach out and grab first the horn, then up to the rein and pull her to a stop. For a brief moment I'd wondered if I'd be able to stay on, but thankfully the old reflexes came to the rescue and I was able to convince her to stop and turn back to face her fears. The doe was gone, but the horse wasn't convinced, so I dismounted and led her past the scary spot, mounting up 50' further up the trail.

The rest of the ride was uneventful, but I surely know that this girl needs a few wet saddle blankets up in the hills before she can be trusted not to spin out from under Darling!

For those who read the last post regarding euthanasia and have decided to purchase some soap...I'm posting a new button here as the last one had the wrong price. As in...no shipping included. Smart me, eh?

Cool ride! I'd been dumped to the ground, I'm sure! Kudos for stayin' on!!!

That is why you keep your heels down. Good job staying on. That is scarey I know. Particularly when there is tumbleweed in the tail and it keeps coming. LOL
Lea

LOL, Lea, I do recall your recounting that particular tale...or tail? :)

Thanks, Callie. I'm getting better at sitting in the center of my saddle and not waving about like a flag pole, thankfully!

We rode again tonight. A week ago it would take us nearly 90 minutes, tonight it was 50 minutes. She's picking up speed!

Tracey, I was glad to read that you got off to deal with some issues instead of facing them on horseback. I always feel like a chicken doing that. But I have, and I think it's the smartest idea sometimes. I still made him cross the bridge in the lead, ahead of my sister's mare. He was just timid for some reason and needed my reassurance and was fine.
P.S. Aren't tree farms great places to ride? Ours appears to go on forever, we have acres of trails we have yet explored!

I liked your comment about her standing so close to you. Carl does that too. "Hold me, I'm scared!" Goofy mustangs.

Way to stick to that saddle. I'm glad you both survived your first wild animal encounter.

Thanks for your help; I really do appreciate it. I like to be informed before I go ballistic...funny how that helps you not look like a raving lunatic :D. I have definitely had some of the "she got spin" moments. Not the time you want to be caught with bad balance (I have never fallen off b/c of that happening, but I can think of a few times that I was clinging to her barrel like frightened or hanging from her neck). I just recently figured out how to search bloggers in this community, so I look forward to reading your posts.

I meant to say "frightened cat" but my mind goes a lot faster than my typing...which is unfortunate. The least I should do is reread before I post...