BIG B, little b...what begins with B? 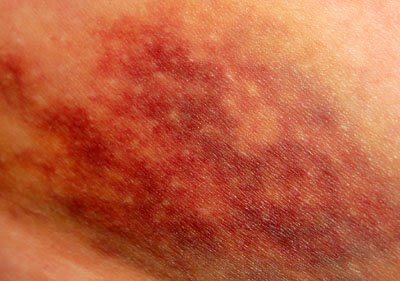 Isn't it pretty? The black stage has left me, the scarlet stage now reins. And actually, it's not as red this morning as it was yesterday. It still hurts, but no longer feels like someone is jabbing me with a hot poker when I walk. 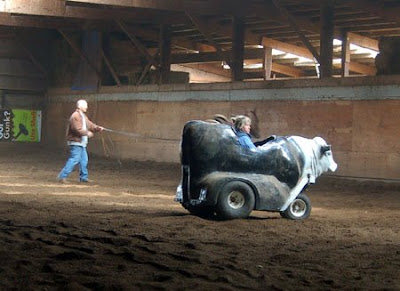 Yesterday went well. Sandy worked nicely through several distractions, including the hydra bull. I began lunging him a couple hours before Jay showed up, and we had the blessing of another horse warming up while we were out there. While I lunged Sandy in the center, she rode Buddy around the rail, giving us the benefit of someone loping up behind him and passing as well as feeling the pressure of someone coming head on. He worked great and wasn't stressed in the least.

By the time Jay got there, the fun was about to begin. We've not been inside the arena while the bull has worked before, just outside. I was fairly confident that he'd be fine, but you can never tell about horses. Sometimes being on the inside without the security of a fence between you and the 'scary' object, things can become dicey. Not so for Sandy...at least not yesterday. He stood facing me, cocking an ear back and looking out of the corner of his eye to keep an eye on things, but fully relaxed. When the second horse began to work, Jay took over at the lunge line and had Sandy working within 5-10 feet of the bull passing while I took on the all important roll of photographer.

By the time the third horse was being worked on the bull, I was in the saddle and working comfortably. The safety net of the lunge line was still there what with all the other activity, but Jay never had to step in or give additional pressure. Sandy is struggling with turning to the right; he pushes his nose out and resists, but other than that he worked very well. 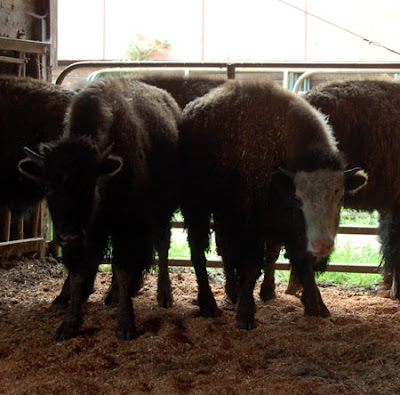 And finally, the long awaited buffalo have arrived! Curt has been waiting on these guys for several months. I think there are six of them, and two have white faces. Freaky looking, if you ask me, but if you were to ask Sandy he'd just say they were cows. Once they settle in and Curt feels a bit better, they'll be worked just like cattle by the cutting horses. 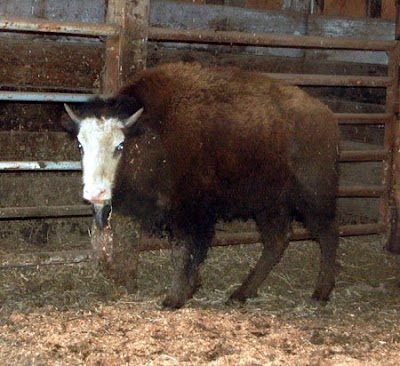 Sounds like once again, another successful day. I've never seen a white faced buffalo before. Funny as Steve and I were driving home yesterday, there were Buffalo in a pasture. In Wisconsin!!

Glad your boo boo is working towards becoming a memory! It's wonderful that you have such great support! Have fun at Ride the West!

When I first saw that bruise, I thought you had another wreck. Glad to hear that wasn't the case.

I think Sandy has more confidence than you think or he'd be more afraid of those new things. I think it's just that when something does push his bottons there is not 'middle" ground....he goes for a total freak out. Some horses are like that.

I've never seen white faced buffalo before either. Are they are cross of somekind or is that normal? Look more like a skull that way........to me, anyway. lol

I should have commented on your lovely bruise there, so I will now........OUCH!

Never saw this before. . . . interesting!

Blessings,
Linda
The Mane Point - a Haven for Horse Lovers

THE MANE POINT – a haven for horse lovers

Now that is just freaky a white face on a buffalo. Sandy is sure brave I am not even there and they are scary to me. Good boy Sandy.