My tennies were on my feet. My boots were put away. I'd finished riding Kitty and was helping the Cowboy with a few little things that he couldn't do alone before heading home. 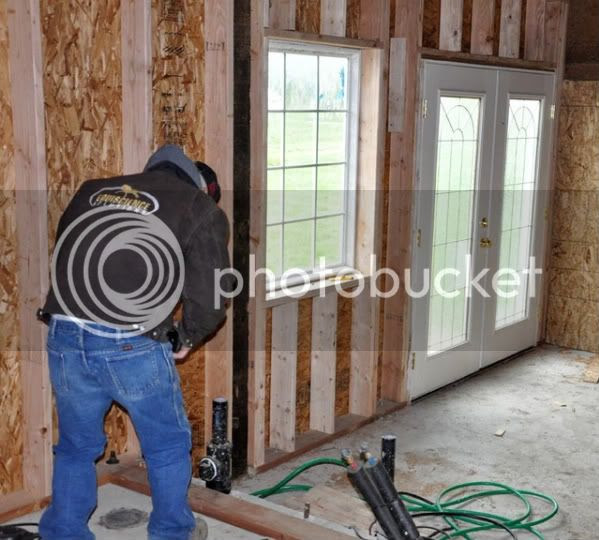 He'd replaced a barn wall, but needed help lifting it up into place and making sure it was 'plumb'. While I was holding and he was nailing, the Doc wandered in to take a look at the progress. "You riding?" he asked me. "Already done," I replied, still holding the framework. The cowboy told me I ought to saddle one and ride with the Doc. I sighed an inward sigh...I really ought to head home, but at the same time, I sure didn't mind being told to saddle one up and ride!


Before I could say, 'maybe not today', the Cowboy continued with, "You can ride turnback while Doc works the buffalo."


I have never worked a buffalo before, and only twice had Sandy and I had an opportunity to even trail a cow, so this was terribly exciting stuff! I quickly saddled up Doxee and got her warmed up.

Enter the buffalo. Just one. A young heifer trotted into the arena and looked around, wondering where her friends were, seeing only the two of us on our horses. Doc was at one end of the arena, I at the other. We were about 30' away from the buffalo, who was done looking and now trotting toward the wall, thinking she'd slip around behind the Doc and head back to the gate. No such luck, as Rose blocked her exit. While Rose kept the buffie from making it to the gate, Doxee and I followed back and forth at our end, making sure she didn't suddenly turn and run the opposite direction. I also had the task of moving toward her hip in an effort to get some added forward motion should she stop too long and not move, but if I did that I needed to be quick to get back to my 'spot' so that she couldn't run past me.

I had an absolute blast! I want me some buffalo... Perhaps next time I can sweet talk the Cowboy into letting me work the buffies with Kitty?

In other somewhat distressing news, there is an outbreak of equine herpes on the west coast. The Cowboy has quarantined his barn for the next few weeks in an effort to keep everyone healthy. The outbreak involved some horses who'd been at the National Cutting Horse Associations Western Nationals last week. Two horses have died (one in CA, one in CO), and many competitors had already left without knowing their horses may have been infected with the virus. There is no vaccination for this strain, unfortunately. If you're on the west coast, I'd highly recommend not traveling and consulting your veterinarian as to the potential dangers. Even though we're in WA, quite a distance away, we know several people who were there with horses, and it makes no sense to risk leaving the barn right now when it is so highly contagious.

Chasing buffalo sounds like such a blast! Herpes outbreaks scare the crap out of me every time.

I worked buffalo only once (on Coyote Belle's mama) and it was a blast!
Thanks for the heads up on the herpes.

Seems there's now a third death...horse out of ID. I know one WA horse who was on it's way home when they got word. Owner left it in a barn with her friend, who'd also been, so as not to bring it into WA. From what I'm reading on facebook, could be too late. One of our trainers up here took 1st and 3rd in one of the classes on a couple of WA horses...haven't heard if they're sick or back home or what.

I'm dying to do buffies on Kitty!

My Jaz would probably have a coronary at the sight of a buffalo.

Scary stuff. I will have to read up on equine herpes. I am not familiar.

Seven horses now, from what I'm counting, have died. Appears to be a case at WSU. CA and UT have closed their borders to interstate travel to horses. Canada has closed entry to US horses.

I really appreciate the head's up re: the equine herpes... I have a few friends down here (SoCal) that are serious amateur cutters that might not have heard about this otherwise.

You should have Darling take a few photos of you working the buffalo :)

PS: Whatever happened to Quiet Storm?

CSU has closed to all non-emergent equine appointments and has euthanized two horses today.

Scary, I heard they closed a cutting that was supposed to run lst weekend here, so I guess its here in Alberta too.

I love working the buffalos, especially on my Razz horse cause she is not at all afraid of them and they will never get past her!

we were at d & b supply in Boise yesterday and an employee told us FOUR local horses had just been put down due to that virus. Very sad...