It seemed an Eternity... 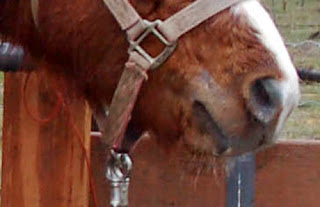 I waited patiently for what seemed an eternity this afternoon, although in reality it was closer to fifteen minutes. I sat in a corner of the paddock with a scoop full of grain. Sunny knew what it was; she'd been getting grain from Steve. Steve, however, never sat and made her take the grain from him. Miss Sunny is spoiled in some ways...she wants her hay and her grain on the ground like she'd eat it in the wild. She refuses hay from the manger, and she didn't want grain from the scoop as long as the scoop was in my hand.

And so I waited...and waited...and waited. She'd begun to relax so much with the scratching that I was convinced she'd become bold enough to eat while I held the grain. She'd eye me warily, and take a few steps forward, then a step or two back. Both of the dogs thought the grain quite tastey, and I allowed the a nibble or two while Sunny watched from ten feet away.

After a few minutes, she lost some of her fear and made her way over to me. Clever girl that she is, she made it look as though that was never her intent. She'd turn her head and look at her side, avoiding eye contact, then take a little side step that brought her a few inches closer to me. Her little baby sidesteps brought her front feet within a yard of me, where she stood and wiggled her lips in anticipation of the sweet treat she knew was but inches from her nose.

But she just couldn't bring herself to reach into that scoop. The dogs had knocked a bit of grain onto the ground around my feet, and Sunny found that just too irresistable. She felt she'd won the battle, I suppose, as she managed to lick up a few stray oats around my toes; she even brushed up against my boots with her nose, she was that close! Perhaps next time...
Posted by Tracey at 4:51 PM