When You Fall Off... 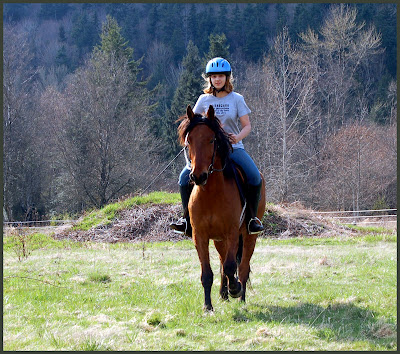 Darling wasn't the least bit fazed by her enrollment in club dirt the other day. She jumped onto the school bus with great anticipation of another afternoon of independence. Upon arriving at the barn she found a surprise waiting for her; I'd lined up a riding lesson with a young woman who boards there. Amanda rides eventers and also works part time at the local therapeutic riding center. She was quite excited to be able to help Darling work on her goal of flying through the air and still being in the saddle once Sandy's hooves hit the ground.


With Sandy having been just a bit of a turd lately, I must admit I had to catch my breath when I drove into the driveway and saw them riding outside. Just a wee prone to running off when he gets tired or frustrated, I could only imagine the worst, but Amanda had taught Darling how to bring him under control and they were doing just fine. 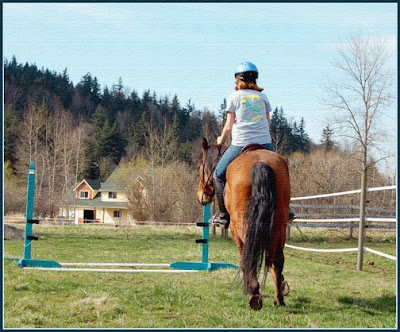 Ground poles had been set up and Darling was asking Sandy to trot across. 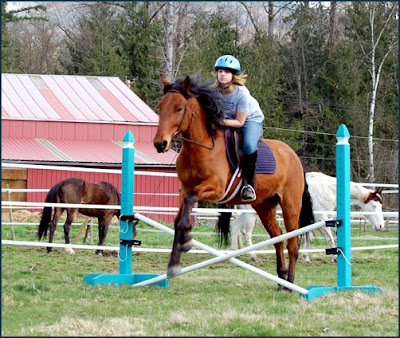 After that, the cross bar was set up. I know it doesn't look very high in the air, but when you're used to a horse who runs through, rather than lifting his feet to go over, you may as well have the skyline of Los Angelos to jump. 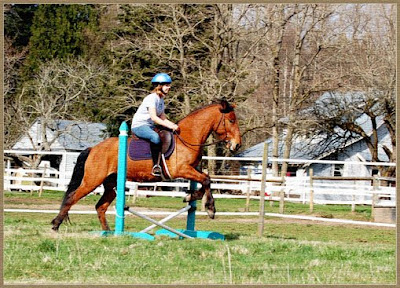 Darling was disappointed in herself when she saw this photo, for although Sandy looks great, she didn't get up off his back. Me? I'm still dizzy from how high he came off the ground and how fast he passed me by.

Amanda said Darling has guts. She's ready to raise the bar next week. Darling is tingling with anticipation. I may pass out.
Posted by Tracey at 7:05 AM

Congrats on the lessons Darling!

I know just what you mean Tracey. The first time Kissy insisted she trot (and bounced all over the place - what can I say she was 7) I about died. I was sure she was going to fall off and get smushed.

Awwe the joys of parenting and biting your lip and having someone hold you back when all you really want to do is run to them...

Just be thankful that she likes horses and is having such a blast with them. :)

That's cool!! I need lessons in the same--as it is, when my horse decides to leave the ground (uninitiated by me, of course), I'm usually thrust backwards--and if it wasn't for my grip of death on the horn, I'd be picking myself up off the ground. My question is, how do you sit an unexpected jump? For example, when you're asking them to walk over a log, but you give them their head and they jump instead?!?

Be balanced so you can go with the motion and not get left behind? Hard part about a lot of western saddles is that they put you in a chair position which tends to make it harder to stay in that balanced, stacked on top of your feet position. Check out the book Centered Riding, has some good illustrations in it. Also...umm, Ride with your Mind by Mary Wanless, or some book by her that I have. She kind of goes through and offers help to different riders and one thing I remember her saying was, if you took the horse out of the picture, would this rider land on her feet or land on her seat?

Darling looks great! She'll get the hang of being in the right position. He still jumped it so they did awesome. I've got gray hair from my daughter jumping and tearing around like a maniac. She does gaming and runs flat out regularly (awesome Mexican Mustang who stops when you ask him to). She jumps in her Western saddle all the time. Ah, to be young again...

I love it- "club dirt!" ;)
That is exciting for her to be taking a lesson, and to be jumping. Maybe Sandy will find this challenging and fun enough to keep himself out of bucking trouble! Is this something she wants to do with him, as in showing?

Yay Darling! You're looking great and it's so neat to see Sandy out there enjoying himself -- I bet he's going to love jumping! :D

Chill out Tracey. ;) LOL (coming from someone who is just worried about her daughter learning to walk up stairs...)

Pictures are great! Darling looks good, what fun to jump! I wouldn't try it now but at her age oh, yes I would!!! Great stuff, jumping!