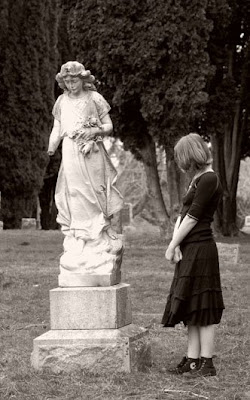 At one time I had a blog called Marbletown Angels. I like the angel above, which is from Bayview Cemetery in Bellingham, WA. Darling was a willing model that day...don't you just love the converse sneakers? As it turns out, angels are few and far between. And after awhile I ran out of local cemeteries to photograph, and the blog passed into oblivion. 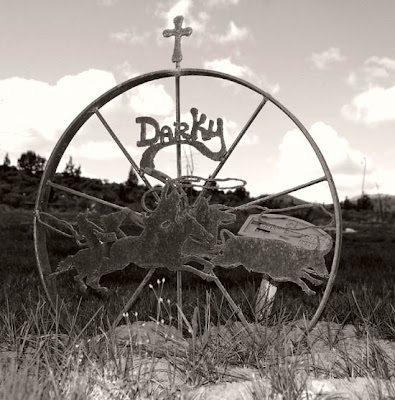 Today's Sunday Still assignment is religion. Architecture is what Ed was looking for primarily, but with what some consider to be a bizarre love of cemeteries has come quite the folder of photographs here on my computer. The photo above was taken in Dayville, OR. Clearly religion played a part in both the life of the cowboy and the making of his headstone.

I recently took part in an online conversation where someone posed the question: If you don't know what you believe, can you actually believe in it? There is clearly frustration among non-believers towards people who talk the talk but clearly do not walk the walk.

The best way for me to answer a question like that is to use a language understandable by those in my company. Horsemanship.

You get a horse. You read Western Horseman and you're drawn to Parelli or McNabb or Anderson...you think they are the light! You begin to tell everyone all that you've learned, offering your opinion because hey, it worked for you when your horse did A and B, therefore it will work with every horse and rider.

Then something happens. You learn something new. You watch a different clinician or read a new magazine and suddenly you're aware that there is more to learn! And as the years pass by, you're less opinionated because you've found that there's a bigger picture out there, that in the beginning you were eating baby food when there was a steak house a couple blocks down the road.

Same holds true with faith. (I'll use Christianity because that's what I know, and what most people get annoyed over.) When you're young and new in your faith, you're ignorant of so many aspects. You call on Jesus as your savior...and that's all it takes to be saved, to acknowledge him as thus...but because you're just a wee babe in the scope of things, you're going to be clueless to many, many aspects of the faith. Add to this that we are all only human, that we still make mistakes and even conscious choices to sin, and those from the non-Christian community will feel just a little annoyed. Or a lot annoyed, depending on the person.

So here's the thing; becoming a Christian is a process just like becoming a horseman. It's not McChristian; you can't just pull up to the drive thru window and have your salvation handed out the second window in two minutes or less like a full meal deal. Because just like becoming a horseman, some people learn it quick, and others take a lifetime. Mistakes get made along the way, people and horses suffer from inexperienced hands, but life goes on and we grow.

And just so I get a bit of architecture in the mix, here's a lovely house of worship I spotted while in Spokane, WA a couple years ago. I would have loved to go poke around but it appeared they were hosting a wedding. Maybe I could have passed myself off as the photographer? Too bad I couldn't find a cemetery while I was there. 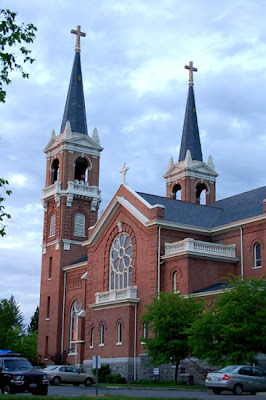 Nice post Tracey. Great pictures and insight into the journey of Christianity.

Tracey, I agree that life, and all of it's aspects are a journey, and I guess my biggest beef with talking the talk and not walking the walk is the hypocricy that goes with preaching one way and living another, and the amount of self hatred that fosters.

I also love cemtaries, and really love the interplay in your first shot of the white angel, and the girl in balck high tops - well done and beautiful!

J9...isn't there hypocrisy in all walks of life? Up to us, I suppose, to be discerning enough to be able to tell those who are attempting to be sincere, yet struggle, from those who are flat out lying about who they are. Glad you like the angel and high tops photo!

Great shot of the Angels, anf great post as well...:-)

Such beautiful images you selected for this challenge. The top 2 are my favorites.
Marie

Beautiful photos and nice insight. I never blame religion for the hypocrisies of man; not everyone is strong enough to live their faith.

The angel is just so beautiful! Great job!

I love the Angel shot. I struggle every day to be a good Christian, but isn't that part of the journey? I have learned to accept my journey as that mine, everyday I try to let people know and see the Bible is in me and that I just do not go to church for show.

That first photo is simply wonderful...love the contrasting colours! Fantastic shots for this week's challenge! :)

The converse to add to the shot.

I love the angel statue too...

Very nice pics. I enjoyed them both.

Lea and her Mustangs said...

I liked your article, only thing, with your new background, it's been hard to read the text :(

Far Side of Fifty said...

Good insight, Thanks for sharing ! Your photos are lovely, the first two spoke to me..the contrast between the little girl and the Statue and then the grave marker, so unique. :)