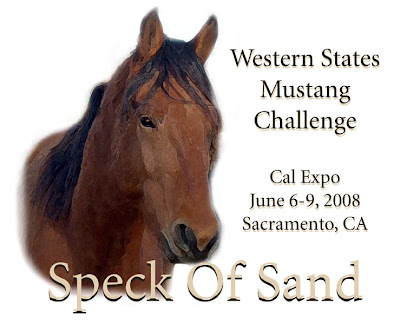 Yesterday was good. Wet, but good. I've done some rearranging out in the paddocks; Firecracker and Jet are sharing the first two stalls and paddock, the one under water. They were always walking into the same stall together anyway, so I figured I might as well put them over there where they'd share a paddock. They've got their own stalls to eat out of, but it never fails I'll find them both standing in one when I go out to feed. Now, don't fret; they're not standing in water. The stalls are high and dry and the paddock gate opens out into the field for them. It's just a bit soggy trying to get there.

With the girls over on the wet side of things, I've been able to open up Sandy's paddock to include Jet's former run. Not a huge amount of room, just 12 more feet, but it's allowing just a bit more space to work in.

The lopsided Spanish Walk is beginning to diminish. It's not gone, but I've been working at taking just one or two steps at a time, then stopping so that he doesn't really get the opportunity to reach out. After doing that a few minutes, we went back to walking across the paddock and he seemed a lot more relaxed. He still struggles getting himself up alongside me, but we did see progress as he did take a few steps with his head at my shoulder.

Our really big step yesterday was setting the saddle on his back. He steps away and wants me at his head at first, and we do a funky little dance for a step or two, but then he stands (tight and ready to flee, no doubt) as I lift it onto his back, then take it back off. I lifted it up twice in the morning, then twice more in the afternoon. The stirrup wasn't hanging down on the off side, however, as I wanted to make it as painless as possible for him. A friend loaned me her wintec English saddle to try out and I think that'll be a nice way to introduce both girth and stirrups.

Darling came out and shot some video, but I haven't seen it yet. While she was there I had her reach out and touch his nose, then ask him to move a step or two. He didn't really lead, but did pivot both left and right for her and didn't freak out at a second, relatively unknown person at the helm. City Boy said he'd go out this afternoon. I'll bring my camera.

My target date for mounting is April 1. I need him to gain some confidence by then =)

Sponsor me in the Mustang Makeover! http://Desperate-Horsewife.blogspot.com Join the Hay Burner's Club and donate $15 towards Sandy's upkeep and I'll send you a 5x7 photo (once the horse is here, of course.) Or buy advertising space in the form of a button.
Posted by Tracey at 9:23 AM

It sounds like he's coming along each day. That's really good.

I am so proud of you both. GOOD JOB