The rains have been hounding us the past few days, and today it's bone chilling cold out there. The hill across the road is completely submerged in clouds and I suspect once they clear we'll see fresh snow up there. 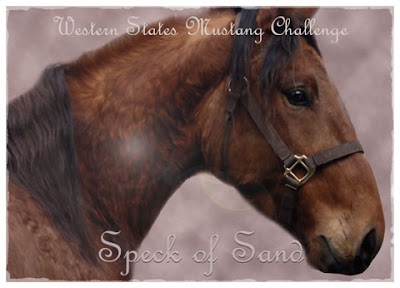 Visit Mustang Fever to find this image and more!
I suspect when you visit the websites of blogs of some trainers, you'll be seeing the very best of each situation. I know I've already heard about folks saddling and mounting, and how wonderful their horses are. Some will no doubt only tell you the good things, as they're thinking about that commission when their horse is sold.


I'm thinking about that commission, too. However, around here, when I get dirty, you get dirty. When I get drug through the mud, you'd better be sure you wipe your feet before you walk through your house, cuz I'm gonna drag you with me! That's right, there's no cleaning up the story here on this blog. No polishing it until is shines. Here at the Diaries, you get the good, the bad, and the ugly all rolled up together.


Thankfully for both of us, there's been no major catastrophe to report. I've decided that the lip issue with Sandy is like a nervous tick. When my son was little, he had a nervous tick. The doctor told me not to correct it or it'd just manifest itself in some other form. Better to just ignore it and let it ride it's course until he got over it. Obviously, I couldn't let Sandy just continue to nip, but yesterday I found it had come back in it's new form. Sandy does the Spanish Walk. But only with his left foot. Which, as luck would have it, is the side I'm trying to lead him from. When he was nipping, it was also only to the left. I've decided to just be careful with the foot as it reaches out and concentrate on things other than him walking right beside me for the time being.


Aside from discovering his natural one sided walk yesterday, Sandy had a pretty productive day. We wore the saddle blanket. The approach to the side wasn't as smooth as it was when I lifted it to his face and ran it over his head. Silly boy. But hey, you take what you got, right? So that's how the blanket made it on the first time. After that, it was a lesson in patience and trust as he learned to accept it coming not only from the left, but the right side. He did great.

Next I pulled out the bosal. Sandy doesn't like things on his nose. I slipped the bosal on and off his muzzle a few times so that he could get used to that motion. Then I went to slip it over his ears. I've been messing with the top of his head so it shouldn't have been a big deal, but he was tossing a bit in anxiety just the same. I slipped it over his left ear, but before we could get the right ear done he bolted. Of course I still had a rope on him so he didn't get far. I had no choice but to finish the job, and of course the bosal had slipped all the way off at this point, so I was starting from scratch with a horse who was now 100% opposed to what I was doing. Still, after a couple of minutes of convincing him nothing would eat him, I slipped it on. He got a good boy pat and I took it right off.


So two big things for him yesterday, after which we discovered the walk. Rather than do a second training session later in the day, I went out to visit a few times and just talked to him and touched him, reassuring him that it was all good. By dinner time he'd relaxed, and this morning he let me come in and touch him again at breakfast. Normally I have a hard time getting up to him during our first visit of the day. Just before lunch I went back out with a rubber curry comb and brushed him with that. It was his first experience with that little black curry and while he didn't melt in my hands, he did stick around and let me brush his neck and shoulders. That's what today will be comprised of; just talking and touching and relaxing. It's been a big week, after all!


Oh...and did I mention we took the halter off yesterday? So all his touching and brushing yesterday afternoon and today has been without the benefit of anything restricting his movement. That's right, the boy is nude. 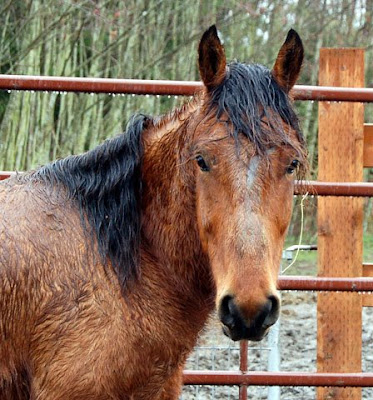 You're right about this weather, it sucks! It's sure not giving you a break for this project of yours.

I think people should worry about those who only tell the good. The secret parts are the ones that can get you hurt. Not to mention the bad and ugly parts are usually where we all learn the most.

I'm going to try and get some pictures of that belly band theory, I have a cotton rope that's long enough but probably not 1 inch in diameter that I can use to get the pictures done.

That'd be cool, MiKael, thanks!

Sandy seems like a sweet guy. I love the "nude" photo of him. His eyes really do remind me of Remington!

Aw, just wait til he learns Spanish Walk on the other leg. Future trick horse! Bummer about the rain...