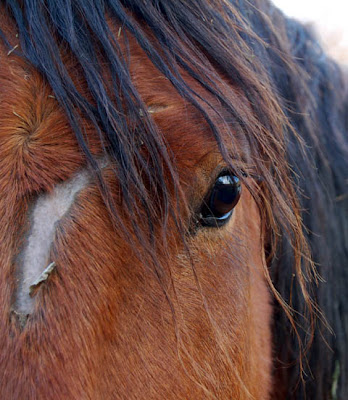 What do weathermen know?

MiKael commented yesterday on how I sure wasn't getting a break in the weather and that she'd heard it was supposed to continue in the 'showers with sun breaks', or whatever it is the weathermen like to say. Personally, I don't listen to the weather reports as they're so often wrong. Besides, what difference does it make? You go outside and work no matter what it's doing; hearing that it's going to rain only brings a person down.

But MiKael just had to come along and tell me that they were calling for more rain. Lovely. More mud. You made day, MiKael! Not.

The weathermen, I'm happy to say, were wrong. The sun came out and it was simply glorious! A light breeze kicked up and I swear the paddock began to dry out. Oh, sure, it's still wet, but that pond has shrunk down to a large puddle. The mud was a little less muddy. And the horses were more than happy to take naps in the afternoon sun.

A lot of progress was made yesterday, but not necessarily with Sandy. I did spend some time with him and he did learn something new. Grain tastes good! He hasn't been to sure about it up until now, but since the ram seemed to like it, Sandy decided to give it another try. And wouldn't you know that rather than dump it out, this time he gobbled it all up. And he wanted more! I think this is going to go a long way towards making a friend.

The real progress yesterday happened when City Boy and I got the round pen up! Well...City Boy got it up. I just directed from the sidelines. But it's up, and Jet went batty trying to figure out how to get inside. She paced around and around; it's the best mustang puzzle she's been presented with. As soon as she sees me open the gate, there'll be no stopping her lips from playing with the latch. I'll need to get a chain around it to keep her either in or out.

The sun is still shining this morning. I'm hoping to take Sandy for his first walk outside his paddock this afternoon and out to the round pen where he can stretch his legs a bit more than he's been able to the past week. And I'm really looking forward to being able to get some real work done on both Jet and Firecracker. That is, if the weather holds up! 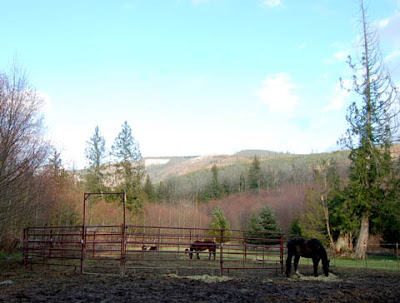 Sponsor me in the Mustang Makeover!


Join the Hay Burner's Club and donate $15 towards Sandy's upkeep and I'll send you a 5x7 photo (once the horse is here, of course.) Or buy advertising space in the form of a button.
Posted by Tracey at 9:39 AM

Beautiful setting at your place. Nice to see some blue sky. I don't listen to weather people either...on Saturday I was helping a friend with her garage sale and the whole way over, he said "thunder and possible lighting strikes"--he was way off...barely sprinkled:-)

What a face he has, scar and all!

Just for the record, I didn't order ugly weather! LOL I am on your side.

I thought of you today as the sun was shining. Those scattered showers the weatherman spoke of were scattered just the way I like them. Raining on someone else's parade instead of mine. I'm glad that they left yours alone as well.

I have to lock my round pen as well. Most of the horses can't stand the gate being closed, they have to open it to go in and investigate. When I see things like that I wonder how some people can say that horses are stupid. There's not way!

LOL...I know you weren't ordering ugly, M~ just had to tease you a bit. It sure was nice for about 24 hours, wasn't it? We had some hail hit this afternoon, but it's not bad right now.

The round pen is almost too slick to use, and surely will be when it's raining again. But at least it's up! Now for the ground to get firm enough so we can have footing delivered...probably the week after the Challenge is over, eh?

So what are you going to put into it for footing? My round pen is currently a lake. Sometimes there are evey ducks in it trying to nest. How flipping scary is that?