I feel nearly human again. Since Christmas, I've been dealing with the flu and it's not been pretty. Less pretty still is the sight of my barn and runs, where the constant rain has created a poop soup nightmare. Even with a fork, there's no way to scoop manure without ending up with a wagon heavy in water.

Drainage is a huge issue. The barn is downhill from the runs and the pasture, meaning that despite the gravel, the water is still making it's way under cover. This summer the number one priority will be to get another load of gravel into those two new stalls, lifting them up enough to keep them dry through the rainy months. 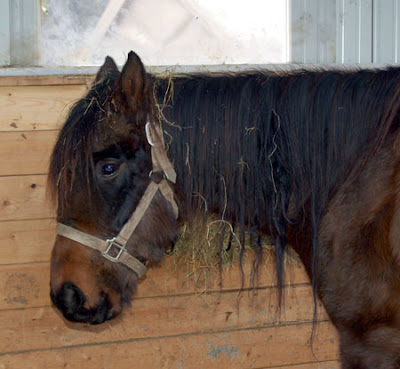 A couple of days ago, the rehab horse (now named Frisco) went to his new home. I've not spent the time with him I ought to have. Cold rain, Firecracker's wound, and my recent flu all contributing factors. But I did make sure to touch his head shy face every day when I went out. His biggest issue was with the lead rope; he has a huge fear of ropes and working around that will take some time. I'd worked him with the lariat a couple of times, letting it fall over his back just as I have the others before him. Of course, they didn't come with baggage like he did. It normally only took a few minutes to settle him down and I could snap the lead onto his halter. Once that happened, he would relax.

Of course when his ride showed up he decided to perform for the added audience. It took me what felt like an hour to get the lead rope on him. I was still feeling weak, the snow had just melted off three days worth of sloppy manure, and I'm sure those folks thought the absolute worst. Eventually I decided to toss the lariat over his head, which stopped the circus act and I got the lead rope on and he led nicely out to the trailer. He took some time deciding whether or not to load, but eventually did it nicely enough and he was off.
A couple things I have learned from this brief experience with him here: Never take on two projects at once, and double that sentiment in winter. Actually, having two projects during the summer months wouldn't be bad, but during winter, when I'm dealing with snow, icy cold rain, and colds/flu, well...that just doesn't work for me. I was trying to divide my time between two horses who needed attention, but the weather drove me back to the house before they both got what they deserved.

Visit me
On the Shores of Carpenter Creek
Posted by Tracey at 8:39 AM

I hope you get to feeling better soon.

You might want to think about clicker training, that will help build trust between you and your mustangs.

I hope you're feeling better. I've been struggling with a bug for a while now and it's been the pits.

Glad that you found a home for the rescue horse and you're back to one project.

Get better soon. One project is tough this time of year let alone two. Hard enough to even get motivated enough to leave the house on these crappy, cold days. Hope Firecracker is doing better.