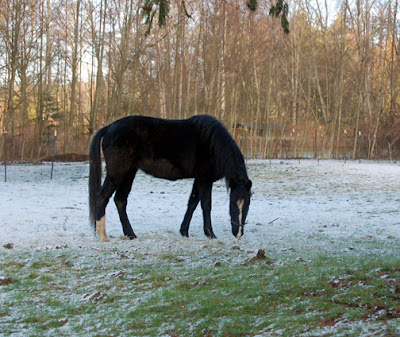 Jet's not been getting the work she needs, and she made the abundantly clear today. I went into the paddock to catch her up, but instead of allowing me to halter her, she began to fly circles around me, and eventually she ran right into the gate, popping it open and out to freedom.

Freedom, because the front fence had still not been mended.

Thankfully, Jet didn't know the fence wasn't there as she threw up her head, lifted her tail like some silly arab (sorry, MiKael!), and snorted her way down to the end of the pasture like a black bullet before turning around and racing back, doing her best to look like a female version of the Black Stallion. I stood and blocked the opening, pretty sure she wasn't going to want to come past me, and wondered what to do next. There were a few round pen panels leaning up against the side of the sheep shed, which fortunately for me was right where I was standing, so while Jet stood and watched, I pulled the first panel up into place. Fortunately, it was just a small section of fence; 20 feet, and I had 12 foot panels, so blocking it wasn't going to be a problem.

About that time City Boy pulled back into the driveway. He went and got the wood rails that he'd promised to put up on his last weekend off and I've now got a three rail wood fence along between the paddock and the gate leading out into the yard.

As for Little Miss Sassy Pants, I walked towards her with the halter and she once again went flying across the pasture, wheeled around and ripped back up to the paddock, straight through her gate and into her stall. Thankfully, nothing on the gate was broken; it hadn't really been latched, just had the chain wrapped around it to keep it from swinging open. Still a bit snorty, I put the halter on her and then left her tied up. I went inside, grabbed the saddle and saddled her up. She spent the next couple of hours just hanging out with the saddle on. I thought about mounting up, but the ground is so soft and wet, I didn't think riding was probably a good idea, especially given how she was feeling just a bit on the frisky side. No point in getting out there and slipping or falling down.

Of course, being the horse she is, once caught up and saddled she acted like she always has...easy going, friendly, and even tempered. I really need to start riding her again.
Posted by Tracey at 9:44 PM

Silly filly! Glad she didn't get away from you. I wish you'd gotten pictures of her Black Stallion impression though...

I wish I had, too! She was flying and snorting and having a whopper of a good time. I've yet to figure out a way to keep my camera safe, though, while out there cleaning and moving them from point A to point B; around my neck it gets to feeling heavy, plus swings around a bit, knocking into things.

I agree, pictures would have been great. But I think it's some law of nature that the good stuff happens only when the camera is somewhere else. Just another form of Murphy's law or something. lol