When Does No Not Mean No? 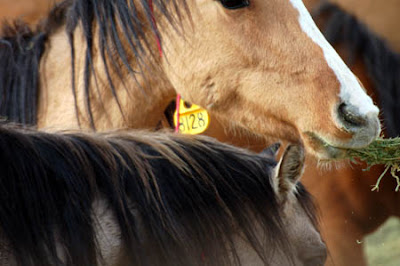 I like this photo...Darling took it.
When your 13 year old snatches your cell phone away from you and answers (after seeing it's her father)..."Daddy...???"

So there I was, shivering in the cold of south eastern Oregon, telling everyone that no, I was not bringing home another horse, my barn is full, when DD effectively bats her eyes at a man who doesn't give me the time of day, and over the phone at that, manages to talk him into letting her buy another mustang. "I'll sell Quiet Storm..." she says sweetly. I had told her she needed to sell first, but did Daddy? [I]Nooooo[/I].....

But wait, I didn't sign up to bid on any Kigers, so I was at least safe, right? No, they'll let us take one of the other horses through the walk up adoption process. Silly me...I should have known. DD marches herself straight on down to the mares and fillies, finds a couple and we ask The Nice Wendy Lady if she's had them there long enough to get to know them. Not really, but the couple DD has picked out didn't stand out in her mind as being crazy. However, she'd say they were 4-5 years, and luckily that's older than I wanted DD to take home. 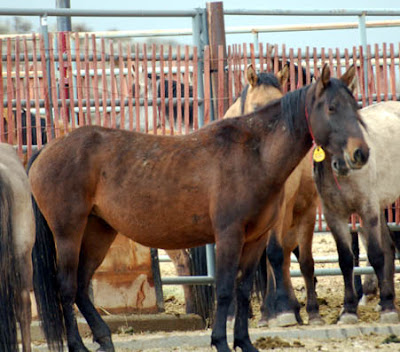 Somehow I'm feeling plotted against. But I must admit that I think DD got a steal of a deal. She paid the base price of $125 when the other fillies in this age range were going for $2000, and only because she was the wrong color. Of course, we've never paid more than the base, but the reason I'm rather smiling over this one is that the filly was likely mis labeled...she's got a very clear line down her back if you get close enough, which we did with the telephoto lens of the camera. 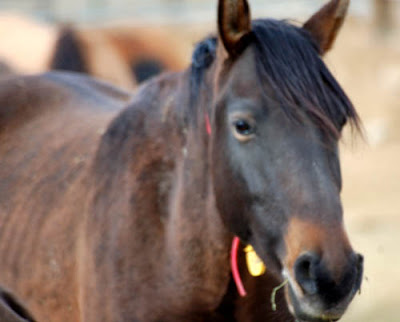 Is dsdy in the dog house?

OK, looks like you're going to have to educate the dumb Arab lady about Kigers. Like what makes them different from other mustangs??

As for batting their eyelashes over a cell phone, that's a pretty cool talent. I think it's reserved for "little" girls and their dads. Before you make another No horse trip you better threaten dad within an inch of his life. lol

I must admit to liking Darling's style as well, lol! I was never able to do that with my dad.

It looks like dd got a steal, which is fantastic!

I have always just brought them home and dealt with The Man later. Until last fall that is, when I brought one home before I sold one. Ooops.

Darling..you go girl. I knew you girls couldn't leave without out picking one out:-) Looking forward to hearing about her new life with you guys.