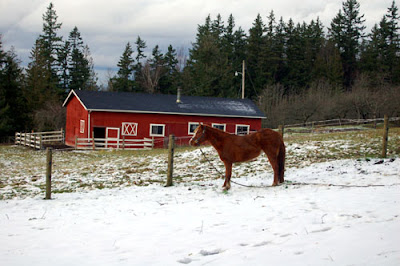 Snow, that objectionable white stuff, fell from the sky on Monday night, covering our land with a wet, white blanket. I'm not a snow person. It's pretty up there on the hill, but I'm not fond of it when it interferes with my life. And Tuesday morning when I got up, I felt interfered with. Sunny was to be going to her new home, and I didn't want to have to deal with poor road conditions.

Thankfully, the temps rose up to 40 and the roads, although wet, were clear. The day proceeded as planned. Well, almost. I was going to borrow Nancy's horse trailer but found that my truck lights weren't compatible with her trailer lights. Thankfully, Nancy also owns a truck and the two of us piled into it, along with Molly the Pug, and continued on with the day's plan.

Sunny wasn't sure about the trailer. It's been nearly 10 months since she was last in one, but she didn't panic or throw a hissy fit. Rather, she stood on the outside looking in until I decided we'd looked enough and ran the rope around her back end. Still took another minute, but she jumped in and made the ride without any complaint. Unloading was easy as pie. Such a sound minded little horse! I guess every horse has to have a hang up; too bad Sunny's hangup is her fear of people.

In anycase, I felt good about her new owner. I think I'll have them shorten up the length of her pasture until they can get a bit more familiar with her. It's much larger than she's used to and I know she'll use it's size to her advantage when it comes to catching her up. A smaller space will mean she'll have to work harder to stay away, and since she already knows she'd prefer not working in circles, it shouldn't take them long to get her mind on track (and behavior!) Once she gives up in the small pen, she'll be fine in the large one as well.

Hope you enjoyed the journey with Sunny here on the Diaries. Here are a few last photos of her settling into her new home. 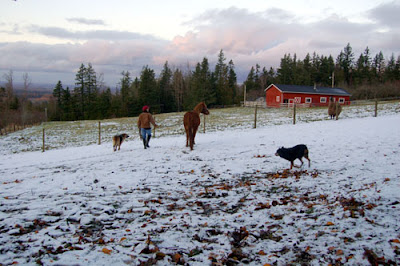 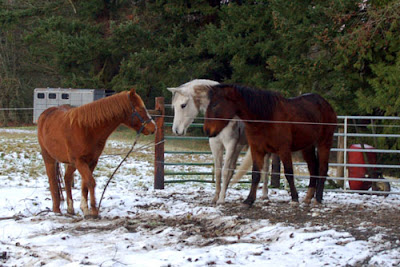 Sally the mustang and a gray Arab say hello. 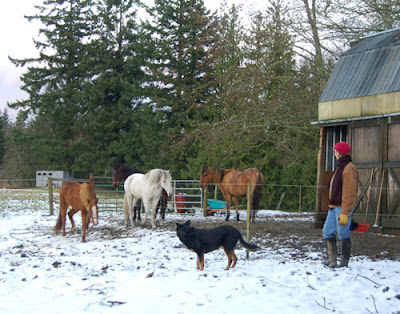 Sunny loves dogs...good thing because they own three!

Visit Darling's Photo Blog Today!
Posted by Tracey at 7:15 AM

Sad and wonderful at the same time. Other horses and dogs to bond with. I have really enjoyed Sunny's development. I bet she will be happy to see you whenever you go visit.

It looks like a great place. Horse buddies and dog buddies. She should be a happy horse.

We'll miss her:-( Looks like a bright future and a happy ending to your journey together.

So heartbreaking to lose someone you care about. Think that you allow someone else to feel those same emotions and feeling, what you felt. Isn't that positive?

Lose is wrong word. But I don't find anything better either.