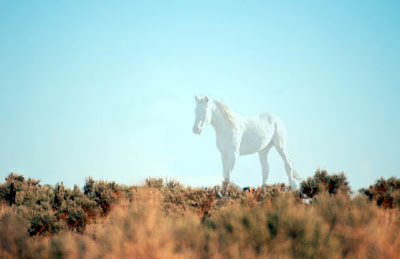 The Ghost is now just a ghost of a dream.

First, why did I say I’d do a blog carnival about five things, when I can only think of four?

Second: I’m in mourning. The Ghost horse was sent to Utah, along with that stunning red roan. The Burns Corrals are being remodeled, so they’re holding tons of adoptions between now and the one up here in WA in June. Excess horses are being sent to other states. My two favorites were among them. Boo Hoo…

Third: I really like Sunny. Did you know that? I’ll be putting her up for sale once she’s titled (February 2008), and I think she’ll make a dandy all around horse. Not an all around show horse, mind you, but something that can be worked off of on a farm, or a nice trail horse, or some 4-H project. I don’t think she’s a jumper type, but who knows? Maybe even pony club.

Fourth: I wish I had a spare half million dollars. Don’t you? I’d like to completely re-do my fences, as well as subdivide them. Then I’d fence my neighbor’s property in. Afterwards, I’d put up a new barn. Nothing fancy, maybe just add onto the one we’ve got. And a truck and trailer…that would be such an awesome thing to have. Right now we're having to beg and borrow.

Fifth: We’ve booked another date for Quiet Storm. She’ll be visiting a local feed store in town the weekend prior to the Monroe adoption. The BLM sent me a gross of pencils, a bunch of postcards, and a handful of very neat pens to hand out. I think we’ll also make a few coloring pages for the kids, then when they’re given back to us, we’ll post them on the blog. I got that idea from Janey Loree at Mustang N Cowboys.
Sixth: Come to think of it, I do have five things! I'm going to be putting together some of the photos I've taken over the past couple of years of wild horses and put them into a calendar. Each Wedensday over at Carpenter Creek I hold caption contests; be sure to stop in and offer up your suggestion. Each winning entry will be put into a drawing and someone (or two?) will win a calendar! 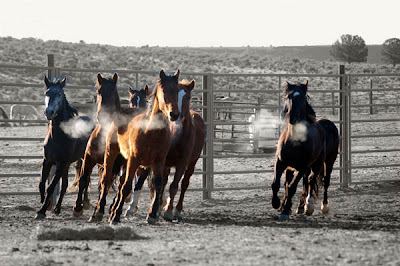 For some reason, I've always found myself falling in love with horses. I think they're the most beautiful creatures ever to be created. And those pictures are just grand. I wish I can take care of one :( I think that when they run, it's a site just filled with valor and elegance :)

You're selling Sunny? Really? Did I miss a post somewhere explaining why you weren't planning on keeping her?