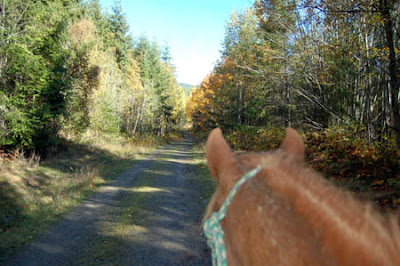 How long have I been wanting photos like this? Well...not exactly like this, because I was only leaning on Sunny's saddle. But other than that minor detail, it looks good, eh?

Yesterday was beautiful, so I saddled up and headed down to the tree farm for a nice afternoon walk. Aside from her usual sidestepping when it came time to being caught, Sunny let me saddle her up and willingly followed down the road. This was our third trip down to the tree farm and she's feeling pretty comfortable out on the road with traffic now. We still haven't encountered anything big like a dump or logging truck, and I'm sure we'll get a reaction there, but with cars and motorcycles and trucks pulling trailers she's doing quite well.

The trail begins as a logging road. It wraps it's way around the tree farm, which is where we went on our first walk up there. Yesterday, rather than do the same circle, we ventured off up the hill where to where I knew we'd find a bridge crossing the creek. 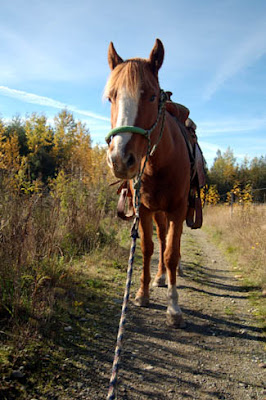 With all the rain, the water was high and I could hear it getting louder as we approached. It sounded like a loud truck rumbling through the woods. The fact that the sound was gradual rather than sudden gave Sunny no reason for concern. I thought perhaps when she saw the bridge she may refuse, but she walked right up to it without a second thought. 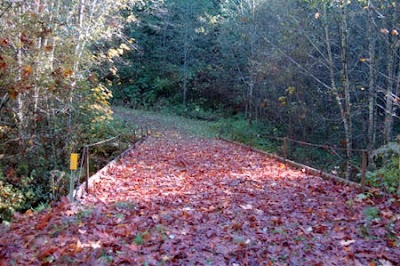 I, however, had second thoughts. Not about whether or not Sunny would cross it, but with the wet leaves on top, the steel bridge was very slick beneath. Plus, there were little drainage holes in it that couldn't be seen for the leaves and I didn't want to risk Sunny stepping on one wrong. Not a good place to panic when you're ten feet above a full, raging creek. So instead, we turned and headed back towards home. 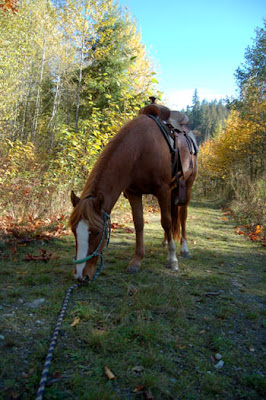 Since I want these experiences to be as positive as possible, I always try to give her time to graze while we're out. She's such a polite horse that she doesn't fight to grab at grass while we're walking, but waits patiently for me to come to a complete stop before she reaches down for a nibble.

We encountered some folks walking their dogs while we were out, big mastiffs and a chocolate lab pup. The dogs had never seen a horse before and weren't sure what to do, although they certainly barked their concern. Sunny wasn't bothered by them, of course, and while the owners were worried about the whole scenario Sunny and I just plodded past. There were also folks who had just finished their ride when we got there; horses were tied to trailers and impatient to load. We stood and watched without any worries.

The only time Sunny batted an eye was on our way home, just as we were leaving the trees and heading onto the road. My neighbors were coming down on their horses...big, snorting Arabians who weren't used to meeting up with anyone, it would seem, as they stopped and refused to move forward when they saw Sunny and I walking towards them. I have to admit it made me laugh, as they live right across the fence and you'd have thought they were seeing some horrible snarling monster rather than the neighbor horse. Once they were alongside of us Sunny lifted her head and turned to watch them go past, side stepping just a bit to get closer to them. But a motorcycle was coming up the road and forced her to forget about the neighbors and continue on home. 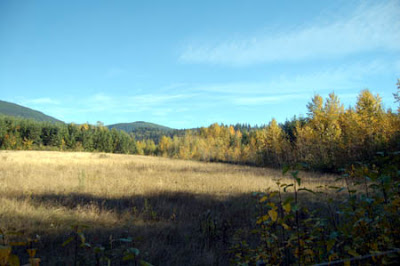 Yesterday was lovely. But today? We're back to rain. And I've got a sore throat to boot. So no walks for Sunny and I. It will be nice when someday I may actually be able to ride her on those roads rather than lead her.

If you've been following along with Sunny's progress over these past several months, you know just how far she's come. In fact, I've decided that to the right home, I may be willing to place her. If you, or someone you know, would like to come visit with Sunny, get to know her personally and consider adopting, please let me know. She'll be needing someone who's quiet, kind, and not in a hurry to get things done. She's polite enough that even if you're a bit afraid to move forward, she won't take advantage of that; in fact, she'd be better off with someone who'd prefer to take it easy rather than someone who wants to push forward. Sunny's still under BLM protection and will be for one full year. Her adoption fee is actually just a transfer fee of $25.

Wild Horse Rehabilitation and Rescue
Posted by Tracey at 7:42 AM

Wish I knew someone that fit the bill---everyone I know wants to shell out $20,000 for a finished horse---I don't get it. You have done an amazing job with her--someone will be lucky to have such a well started, well loved horse. Nice job Tracie--I didn't expect to see pictures like that for another few months--great progress!

What a beautiful Fall day for a walk in the woods. It is so impressive that she is taking all of the new things in stride.

Bravo! The lucky person that gets Sunny!

Loved the photos. Rides in the woods are only in my dreams...someday.

There's no doubt that Sunny will be one solid minded little horse once she gets past her hang up of someone climbing on board :)

She's coming right along. Good for both of you.