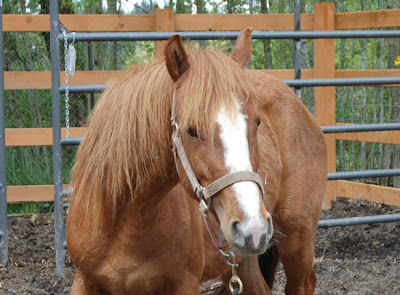 Sunny gives me her right eye

Life is full of surprises. Surprise number one was a most pleasant surprise! Sunny has made great strides over the weekend. She's continued to allow me to move all around the left side of her body. She's not willing to give up the legs just yet, but an incredible leap of faith on her part was dropping her head down to my waist and allowing me to stand directly in front of her while massaging her poll, right ear, and down the right side of the crest of her neck. In fact, she enjoyed it so much that yesterday she turned to face me and physically reached out towards me! It still took a bit of coaxing to get her to relax, but she knew what she wanted. 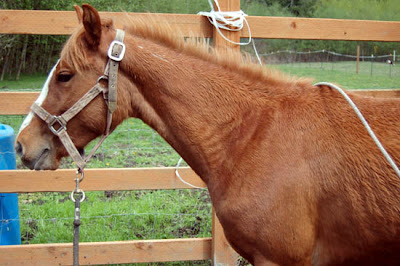 The lariat swung over Sunny's withers 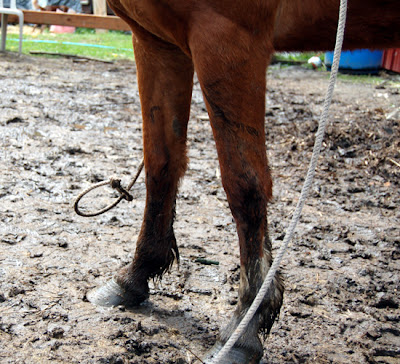 Amazingly, she didn't seem to mind the rope bumping her down on her leg. This will make saddling so much easier when we get to that step! And yes...we've had rain, which combined with Sunny's feet, made mud. 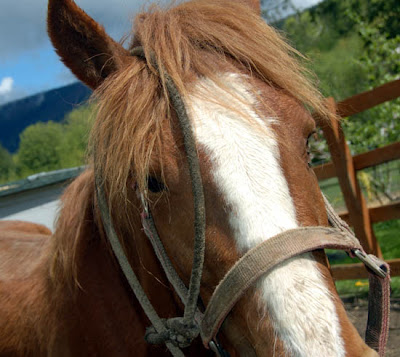 While I'm not allowed to approach too closely, I'm able to leave the lariat over the top of Sunny's head. She's not too terribly concerned with it passing back and forth over her eye and ears, and although she felt it was a rather silly headdress, she let me take this picture!

Surprise number two was less pleasant. I've left the saddle sitting out so that Quiet Storm could become accustomed to it being nearby. In fact, it'd been left for a week over the rail between their stalls, and QS didn't appear to care much one way or the other after that initial shock.

Yesterday I brought her out and thought I'd toss the blanket over her back while she was tied alongside the saddle. Should be a piece of cake, right? After all, we had that old flannel sheet all over her a month ago, and she'd had my heavy coat tossed on and off her back over and over without flinching.

Evidently saddle blankets are different. They are to be avoided at all costs. In fact, one should attempt to kill them.

I'm sorry I have no photos of the event. I couldn't hold onto a stomping mad two year old, the saddle blanket, and take pictures all at the same time. Hey, I'm good, but not that good!

Quiet Storm pinned her ears back and struck at the blanket while tied. I figured I'd untie her, walk along with the blanket in my hand and have her follow. I didn't really want to be in a tight place alongside the fence the way she was reacting. So out into the yard we walked, ears pinned back the entire time. I turned to face her, shook the blanket at my feet and out off to the side a bit.

And that's when she tried to kill it. Ears pinned back, she did a half rear and lunged at the blanket! I took a step back, gave a quick pop on the lead rope and continued moving the blanket (although admittedly a little less vigorously now.) Still, I wasn't planning on giving up. I continued to lead my mad tantrum thrower around while moving the dreaded saddle blanket, and she followed along, making her displeasure known.

This behavior is exactly what she'd offered up back in late June when I introduced the fly mask to her. She'd wanted to kill it! I left the fly mask hanging in her stall then, and I left the blanket hanging over the fence rail alongside her hay last night. I'm sure by this morning she'll have forgotten all about it. At least...that's what I'm hoping!

Happy for your pleasant surprise.

Mmmmm... but killing saddle blankets. Mmmm... Wondering, did she forget?