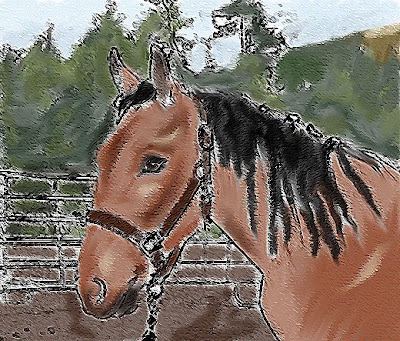 For some odd, unexplained reason I've decided that I must, at the age of 47, start taking risks that I never took as a child. Such as...hopping on the back of my trusty steed, no saddle, no bridle, and trotting around the pasture. At some point I must have fallen and hit my head because the following day I decided I needed to stand up in the saddle, despite my notoriously poor balance and weak knees.


Sandy and I have been for a handful of rides these past few weeks. I'm a little confused, however, as he's been sweating quite a bit; much more than he was prior to his eye injury. Before we could go all day. He was slow, but his breathing was never heavy and the only sweat was under his saddle. Now, however, we can't get more than ten minutes up the trail before his neck is wet. Fifteen minutes and his chest is soaked, he's wet from his ears down to his elbows, and even his muzzle is damp. He also seems to want to stop a lot more frequently, but then again, he's always been on the poky side, so that could just be normal.

I called the vet, who feels Sandy is too young to have gotten this much out of shape with such a short break, but that he's also too young for metabolic issues. His short term suggestion is to monitor the heart rate. So today I headed out with a stethoscope in hand...but then realized a watch with a second hand would probably have been in order. Oh, well. While I couldn't really get an accurate reading, I could certainly tell that his heart was pumping a lot harder on the way up than it had been before leaving, and I could also tell it was beginning to slow down after a few minutes of rest. But what I need is an exact count so that I know just how much it drops, and how quickly (or not) it's back to resting rate.

The sweating only happens when we climb. I rode in the arena for over an hour, and while most of that was just walking and jogging with very little loping, it still didn't cause the sweating that ten minutes on the hill causes. He also cools out and picks up the pace once we're off the hill, such as when we rode up to see Mt Baker a couple of weeks ago. He struggled going up, but once there he had no problems.

Something is up with my guy, but I'm at a loss as to what it is. The good Dr. Plotts has recommended taking it easy and gradually building back up. If things don't improve here in the next week or two, or if he seems to get worse (or the heart rate isn't dropping), then it's another trip to the clinic for some blood work.

In the meantime...it sure gives me an opportunity to perfect my trick riding!
Posted by Tracey at 6:33 PM

I hope that there's nothing seriously wrong with Sandy. I'm hoping it's some sort of "bug" or something. Got my fingers and my toes crossed.

Is he growing his winter hair and heating up faster? And maybe stressed because of the eye injury.Have you wormed him for bots yet? Worms can really sap the energy from a horse.

Oh, Hope the Sandy boy is ok! It's good that there is variability in the heart rate. That is a good thing.