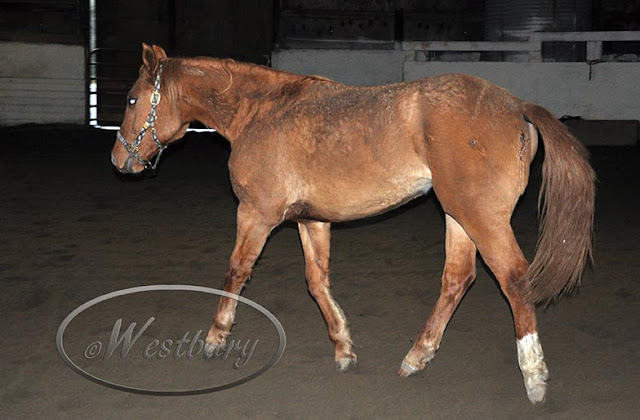 "Someday you'll learn," were the parting words of the Cowboy as I hobbled out of the barn, a lovely purple and blue hoof print encircling my knee cap.

The lesson was to work the horse until she was tired before doing something new. It's obviously a lesson one should learn early on, if they're going to work with mustangs, or any youngster for that matter. But such is life, eh? Sometimes
we slip up and do something that doesn't seem like such a stupid idea at the time.

I'd led Flirt into the big arena rather than the round pen today. Rope, coat and plastic bag work had all gone so well, I thought maybe today I'd introduce her to the saddle blanket.

That didn't go so well.

She was fascinated by the smells of other horses, burying her face in the blanket, but not liking when I tried to rub it on her neck, or bump her shoulder with it. No huge reactions, just stepping back and pushing her face into it again. I didn't press the matter, I didn't think. I simply approached and retreated, and as I retreated she would approach, wanting to bury her face in it some more.

Eventually I decided I'd walk her back to her stall, carrying the blanket with me. She followed on a somewhat loose lead, her muzzle at my pocket where she knew the treats were hiding. I finally stopped to rub her face and hand her one, but something got into her mind. Something that said, "Run, and kick that nasty saddle pad when you go!" And so she did. Except she kicked my knee cap instead, which dropped me to the ground in relatively short order. She then ran back to the front of the arena, where she paused at the small door that led into the barn.

I hollered a few times before anyone heard me. There was a horse in the cross ties and I sure didn't want her getting into a wreck. Someone finally heard me, but of course by then Flirt was trotting through the small alleyway out into the barn. She was led back out by someone who was just a little intimidated by my oversized, somewhat frightened yearling (why? I can't imagine, lol), and I managed to get myself up and over to her, led her back to her stall and put her way.

My knee? Oh, a lovely shade of bright purples, blues and black. Swelling? Well, a little, I suppose. Drenched it in DMSO, then vet wrapped an ice pack to it, after which I drove the half hour home. And here I sit, telling you my story so that you make sure you work that horse until it's tired before you go introducing a saddle blanket, okay? Okay. Once I get this unwrapped, I'll take a picture and share the beauty of it with you!
Posted by Tracey at 11:33 AM

I second what Kate said.
Get better soon.

ouch that sounds really painful hope that you heal up soon!

Sorry to hear, but glad it wasn't worse.